Forum rules
Before posting critique in this forum, you must read the following thread:
Post Reply
27 posts

I was doodling around, procrastinating, and thought this came out nicely.

I am a poor cell shader, really poor at anything that involves doing art on computer, but I will attempt to.

Let me know what you think, or give a hand at coloring it in if you like!

Oh I also think it's 4 pixels too large for width. 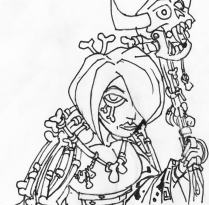 Not bad. It looks like a late picasso, when he was in his cubistic phase. If you want, that others try their hand at coloring, you should provide a highresolution picture with layers.
http://brilliantanyway.blogspot.com/ Brilliant Anyway
Top

vonHalenbach wrote:Not bad. It looks like a late picasso, when he was in his cubistic phase. If you want, that others try their hand at coloring, you should provide a highresolution picture with layers.

I dodn't think it's Picasso at all. I actually thikn it looks pretty neat. Unfortunately, I'm not sure how good it will look once colored because of all the bones. The line art is pretty good though.
The Era of Myths
The "How to Play..." series
Second draft.
Top

The style seems similar to that of the TROW portraits... of course, I can't really tell until it's colored.
For I am Turin Turambar - Master of Doom, by doom mastered. On permanent Wesbreak. Will not respond to private messages. Sorry!
And I hate stupid people.
The World of Orbivm
Top

I hope not to offend you, but it almost looks like an..."emo headhunter".
For some reason I still like it though, and it is better than most of my attempts, I'm to embarrassed to post my poor work on here.

Ha. "Emo Headhunter" is fine, I mean I have been trying to copy the sprites, and in Wesnoth lady necromancers like to wear bobs with huge sweeping bangs. She may indeed be wearing skinny jeans under the moldering robes and bone bits.

I have scribbled out her male counterpart, didn't bother to ink it (as I did the female one) and am uploading it full size. Hopefully this will be useful to anyone who wants to color.

If this is an improvement, I will redraw the girl necromancer as well and upload a pencil sketch or just forge ahead try to figure out that tricky vector coloring stuff.

Does inking in color and then scanning work? 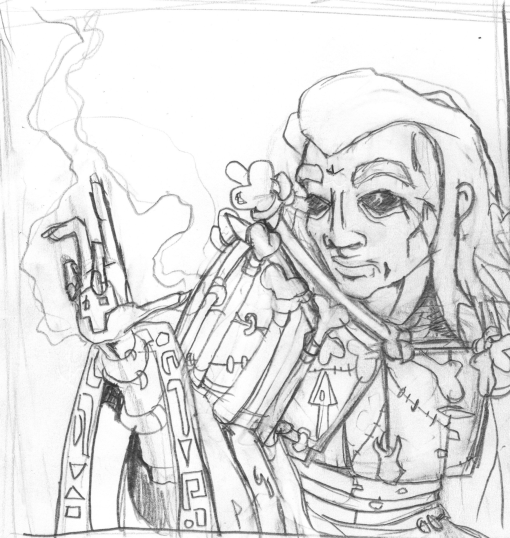 The problem is, bones don't really look like that. They look like a bunch of dog treats, not actual bones. Most bones don't have a fork like that, but rather knob up, or have a very subtle split.
Newest Releases:
Conquest 1.0
Empires 1.1

That bike needs a dog skull in the front, they could call it The Hound.
Top

Kestenvarn wrote:That bike needs a dog skull in the front, they could call it The Hound.

Turn on, tune in, fall out.
"I know that, but every single person nags about how negative turin is; it should be in the FPI thread "Turin should give positive comments" =)"-Neorice,23 Sep 2004
Top

Reminds me a bit of Inka designs and reliefs. I don't know why. Not bad perhaps a bit over the top though.
... all romantics meet the same fate someday
Cynical and drunk and boring someone in some dark cafe ...
All good dreamers pass this way some day
Hidin’ behind bottles in dark cafes
Top

Change the bones and I say the male looks pretty good, I like having all the demonic type symbols on his robes, better than just plain. I'd try to draw more attention to the face than the body though, seeing his waistline isn't really that necessary. And again, don't take offense, I don't even like my work enough to submit it.

Firstly, too much detail. These pictures are very busy.

Alrighty -- I'm trying this vector coloring thing -- though there's no shading on this one - making it more of another sample.

This time I did an elven archer of some kind. I guess iapt's the female variety, but it's pretty hard to tell. Anyway let me know if this is the right track.

I get the critics on the Necromancers -- although strangely enough I actually know ome of the guys that made that bike. I will attempt a redraw soon enough on them with less detail, more 'boney' bones (though with cartoonish high fantasy, I'm less sure bout that), color and some wrinkles - though the sprites (beardless & pink) look awfully young as well.

Jut the basic areas roughed in -- when I've slept more than 3 hours (' I said I wa procrastinating')', 'I'll clean it up and and some shading/highlights/details...
archersmall.png (41.66 KiB) Viewed 3625 times

If you're going to redraw the necromancers, I would suggest - less bones. Too many bones doesn't look scary, it just looks stupid. Right now these two portraits look rather absurd; kind of like deranged voodoo witches. Not like wickedly imperious necromancers.

In fact, I would suggest not having any skeletal decorations on them except for the staves.
For I am Turin Turambar - Master of Doom, by doom mastered. On permanent Wesbreak. Will not respond to private messages. Sorry!
And I hate stupid people.
The World of Orbivm
Top
Post Reply
27 posts