Forum rules
Before posting critique in this forum, you must read the following thread:
Post Reply
34 posts

I was thinking that the Lightbeam (that the White Mages etc use) could do with an awesome special effect like Zookeeper's Lightning. I made some and tried them out. They are a work in progress, they look good ingame but still need a little cleaning up. I just want opinions from people before I go ahead and do that. 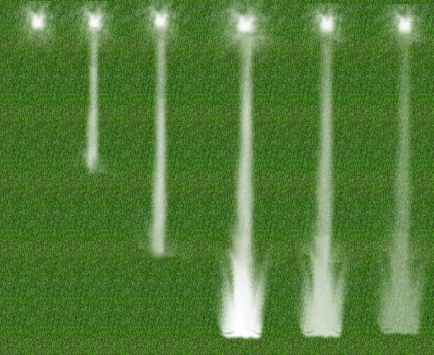 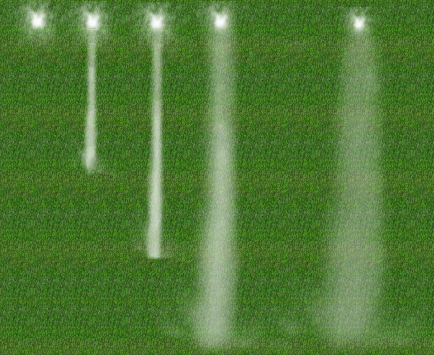 They both look rather good, the second one (in order of appearance), looks too powerful for 'Light' Magic, maybe it could be for the Mage of Light though.

While the second one, looks weaker, and more like a dousing effect, and could be used for the White Mage.

I like the first one.
Last edited by Oreb on November 25th, 2006, 11:51 pm, edited 1 time in total.
I am Oreb, Lord of the Darthien
Give your comments to the World of Orbivm
Top

If you'd want to get real fancy, you could make several variations in which the lightbeam comes down in different angles (instead of always directly from above). Directly from above might fit the attack thematically better, though, just throwing out ideas here.

I like the first one (in order of appearance) better, I think, although it's hard to say without really seeing them in-game.
Top

I think it would work better if you start with a narrow, faint beam that reaches the ground from frame 1. Skip the little glowing ball at the top. I know what you're trying to do, but it just draws attention in the wrong direction, and doesn't work with Wesnoth's point of view.

The beam widens and intensifies for a few frames. At the moment of impact, it get's much more intense, and then fades.
Feel free to PM me if you start a new terrain oriented thread. It's easy for me to miss them among all the other art threads.
-> What i might be working on
Attempting Lucidity
Top

I can visualize what Eleazar is describing, and it looks perfect.
The Era of Myths
The "How to Play..." series
Second draft.
Top

I like Eleazar's idea. Also, instead of having the light be a gradient, it should probably be decently intense throughout the entire beam itself. With your examples, it almost looks like it's a beam of mist instead of light. Either that or make the edges of the beam perfectly straight, in your examples it looks like they are curving a bit.
Top

Screenshot gallery! Top is Eleazar's idea, bottom is the original. I'm still toying with the "splash effect" one. I'll put that up when I've got it looking good, and then take votes.

EDIT: Argh, it was too big. Okay, I shrunk it a little. Hopefully now it'll let me put it up. 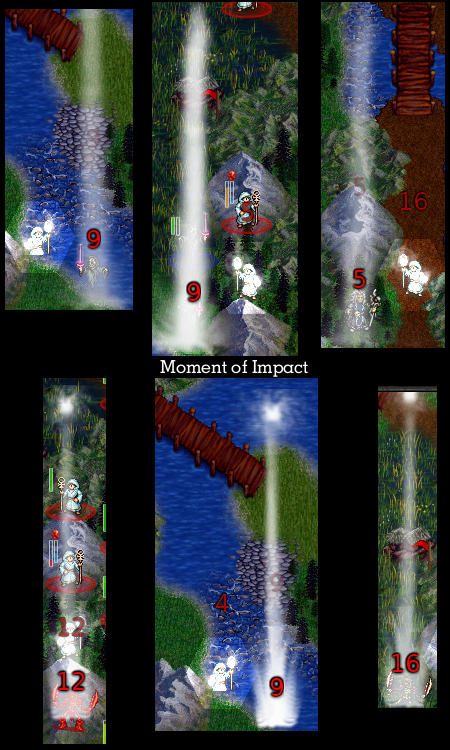 The glowing ball thingy at the top of the beam really doesn't work.
Otherwise, I am liking this.
Top

I'm liking it, and like others have said, get rid of the white swirl at the top.
I am Oreb, Lord of the Darthien
Give your comments to the World of Orbivm
Top

For the next week, I'll be away a lot, and rarely if ever get on to the forums or have time to work on this. But after that, I'll fix these up into awesomeness.
Top

You know how they say a picture is worth a thousand words? - there are a number of things that eleazar/zookeeper/I would like to suggest, but trying to suggest them in words is basically impossible. We could spew pages of text, and still probably not get the message across.
Top

Here they are, all put in a nice little .zip with the nessecary unit file to try it out ingame yourself if you want.

The concept is classic. I hate to jump in, but I envisioned something more like this.

Check out my portraits HERE!
Top

While Pickslide's is more skillfuly done (and looks awesome), I actually prefere Flame's concept of a concentrated beam with a 'splash' at the impact point.

Pickslide's doesn't really look...damaging. Good for a tan maybe, but not for banishing the forces of evil and whatnot.
Top
Post Reply
34 posts