Forum rules
Before posting critique in this forum, you must read the following thread:
Post Reply
1142 posts

Uh... Looks like the saurians are drunk and wobbling. I understand a gentle standing animation, like exaggerated breathing or wing movement. That would bring the unit forward from the (currently) static terrain, which is a good thing. I guess the units are not as synchronized in-game but still thinking of a huge army of bouning soldiers makes me quite suspicious. Please make sure they really are ok in the game before all units are doing some disco dance.
segmentation fault
EBfW, GtR, Art, Old art
Top

How can you not like bobbing animations. I love the work that Sleepwalker has done with saurians. It looks very cool in game too (tried them myself). It's different, takes some getting used to. But IMO it's a great addition to the game.

The fencer one is pretty cool too, could a bit more movement though.

So many, too many saurians... Have to stop them, kill them.
Creator of the Era of Chaos and maintainer of The Aragwaithi and the Era of Myths.
Wesnoth-UMC-dev, a nice place for add-on creators.
Top

I was a little skeptical of the "bob disco" myself on seeing sleepwalkers work, but they really look quite nice when viewed in game
Top

Bad_Dog wrote:Fencer standing animation really bothers me, though. It's probably that he's moving the swords downward out of sync with his body moving upward.

Intentional. If all the movements are perfectly in sync it ends up looking rather robotic. If you look at the saurian animations, their limbs aren't completely synchronised either - watch the Flanker's shield jiggle about in the SE facing, for instance.


cretin wrote:...the bottom right of his cloak (our perspective) looks like it disappears for a second.

The corner was supposed to be flicking up a bit as he moves... I think I may have overdone it, though (loose cloth is hard!). I made a whole bunch of different versions trying to fix it, but I think this one is the best. It's a little more subtle.

well, I think that we will not see how good works all these animations until we are playing. Maybe is just a problem of habit. Meanwhile, all we can do, is to produce a bouncing animations as subtle as posible. I want to contribute my sand grain with the dwarf fighter standing. I take the opportunity to clean a bit some texture and pixel of "old" baseframe. I love to hear what going to say Jetrel & Co about the discussion generated by all theses animations (also about saurians).

Great work as usual, although IMHO the shading looks a bit too smooth, almost cartoonish (sort of like cel shading); and I can't shake the impression that he's chewing something.

Hate to say it, but I'm not convinced. Some of it seems smooth, but other bits are quite jerky (the ax, top of his hair, bottom of the beard). His chainmail is not well enough defined in my personal opinion. It's a tricky one I appreciate, but I find bit like that can be exaggerated nicely and you'll get away with it.
Softly/SoftlySplinter on IRC. Will be lurking around more these days
Mainline Animations|The Væringjar
Art for these mead-sodden, bearded mushroom-junkies by Girgistian!
Top

artisticdude and cloud, both you are right. But have you stop to think that maybe there are some aspects of current style are a bit wrong? For instance, the dark outline of most of the units it's a kind of shadow/light that don't works fine on all backgrounds. No problem with dark backgrounds like caves, but to much contrast with light backgrounds like snow. For this reason, I tried to eliminated it.

About shadow/texture, I'ts true that the newframes seems a bit to a "cartoon style". But this also have a reason why. A baseframe with a lot of noise and to much texture it's extremely hard to animated. So if why simplify our colour range and grain, we can do a lot of animations with less time. So at this point, we have a balance betwen a baseframe very texturized and less animations, or a colorstyle a bit simplified with more animations. Because i perfer the second choise, I did also this little change from current style.

Although theses changes, I think the new animation match the mainline. Think you are looking it with a magnifying glass... 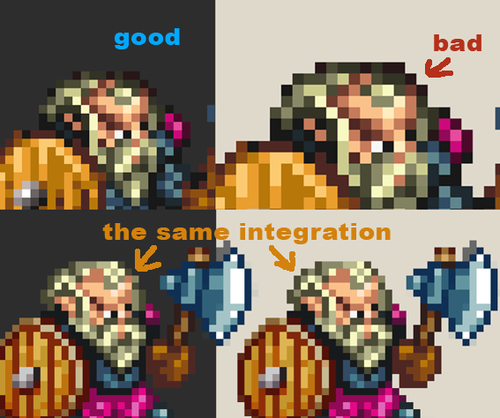 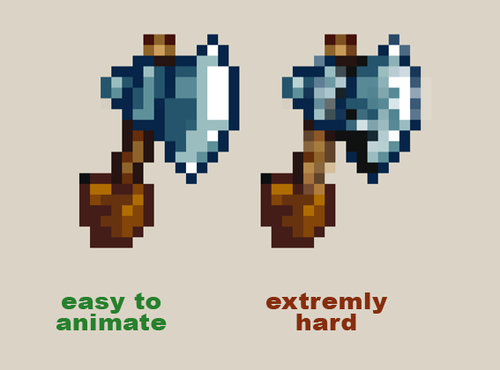 rhyging5 wrote:I love to hear what going to say Jetrel & Co about the discussion generated by all theses animations (also about saurians).

Jetrel et al. have already commented on the saurians in the saurian commission thread in the restricted Art Development forum. Consensus is that they are pretty awesome. I'm assuming that TSI will be looking at this thread eventually since it was he that responded to my initial blocking of the fencer. But, according to his sig he's just moved and still doesn't have proper internet access, which is probably why he hasn't commented yet.

On the dwarf fighter, I agree with Cloud and artistic dude. There's one frame in particular where the axe suddenly gets these outlines that make it look really out of place, and I don't think you can tell that he's supposed to be wearing chain mail. I know it's going to be a nuisance to animate but I think you're going to have to do the full chain mail effect.

Also, I was under the impression that it was standard to put outlines on Wesnoth units because it makes unit pop more from the background, and in some cases can be used to distinguish bits of clothing/hair/etc. with similar colours, such as light hair against pale skin. The saurians and the fencer both have dark outlines. I guess you'd really have to wait for word from one of the art directors on that, though.
Age of Trials MP Era - Map pack
Top

Except that Jetryl says: LEARN TO AVOID BANDING. Which is using blocks of color in pixel art. It lowers the resolution, and looks worse than using an image with grain. The best pixel artists work hard to avoid doing what you did. (You might want to read the article linked in Jetryl's post. It was quite interesting and helpful.) I don't think the benefit from animation is going to outweigh the lowering of the quality of the sprites. By the way, I don't think it looks bad now, but the art directors are very picky, you know!
Campaigns: Dead Water,
The Founding of Borstep,
Secrets of the Ancients,
and WML Guide
Top

It's a good idea to simplify the texturing during animations that go by quickly, like attack and defense--most units in core already have animation frames that are much simpler than the base frame. However, the bob animation is going to be cycling on screen constantly, so it can't afford to take any shortcuts.

Also, banding is *not* using large blocks of color, it means stacking bands of different colors that have the same shape. Larger, simpler color masses aren't necessarily undesirable, depending on the style you're looking for and the material you're rendering--however, the amount of simplicity suggested in the example above is less textured than the standard for Wesnoth sprites, and *does* look worse than the well-textured example for reasons unrelated to banding.
Stone Remembers: A novel in the Wesnoth universe
A-Red's Sprite Art Thread
Top

there's something strange about his hair in the last frame on his movement down). it's hard to describe - maybe it's the dark outline in this frame. the hair looks rather flat there. but i really like the new head/face.

his left foot looks odd - like he's wearing a shoe with a perfect circle as base. there's also one (or two?) frame/s of the axe that look out of place. the shading is much darker and the shape seems to change as well.
Top

A-Red wrote:It's a good idea to simplify the texturing during animations that go by quickly, like attack and defense--most units in core already have animation frames that are much simpler than the base frame. However, the bob animation is going to be cycling on screen constantly, so it can't afford to take any shortcuts.

this have only a "half" sense. Because you are not drawing all frames for equal. Then you are losing homogeneity.


A-Red wrote: the amount of simplicity suggested in the example above is less textured than the standard for Wesnoth sprites, and *does* look worse

are you really sure? I continue thinking match the mainline. You can see the same head, legs, and a shield with more definition. How you can say look worse?

I appreciate how difficult it is to animate these rock suckers, but changing a base frame which already has a fair few frames of animation done is only going to take more time to deal with. Plus it's my opinion that the old maxim of quality over quantity applies to our art now; reducing the quality now will only increase our workload in the longer term when we have to upgrade the unit again.
Softly/SoftlySplinter on IRC. Will be lurking around more these days
Mainline Animations|The Væringjar
Art for these mead-sodden, bearded mushroom-junkies by Girgistian!
Top

well, I'm not talking exactly to reduce the quality......I talking to reduce the grain/noise/texture only a bit, always matching the mainline style as posible, you know? For instance, something betwen current sprites and something like that: