For purposes of movement between the hexes, I think 45 degrees makes much more sense, and is in fact what Wesnoth is (intuitively?) using, based on the little footsteps that appear when a unit moves.

Attached is a visual illustration of how I come to this conclusion. 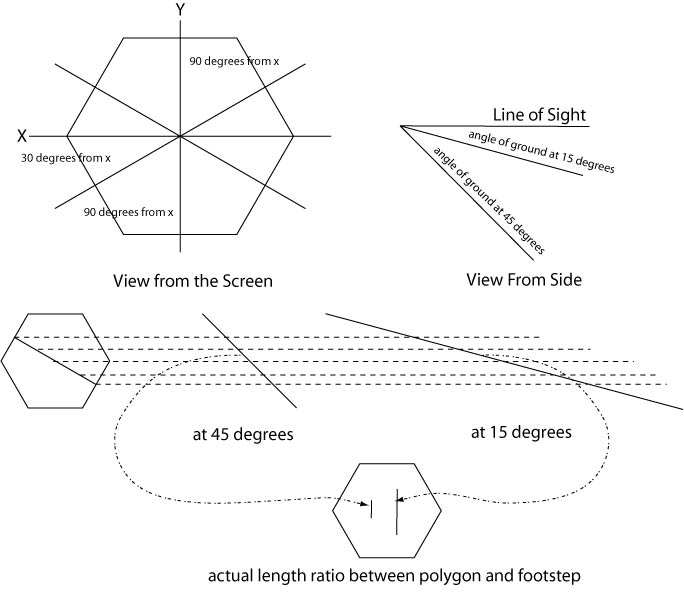 If the units are being viewed at 15 degrees, or something like that, each step would have to be enormous. Because it would be ridiculous to represent extremely long steps or a whole lot of regular sized steps to move a little distance, this would probably have to be overcome by having the ground plane at a very steep incline. In that case, the world of Wesnoth's North would always be a very steep up and South would always be down.

At 45 degrees, the distance between each step is what you would expect it to be.

Of course, Wesnoth animations aren't bound to the usual rules of geometry.

Please let me know what you think or if I've made some mistake.
Top

Ooops, where I say footstep above, I mean length of stride. Also, the "actual length" is only the actual length from the left. The true length is a little bit more difficult to calculate, but only increases the disparity between the length ratio of the 45 and 15 degree views.
Top

I'm not quite sure what the exact angle of perspective is, because it's not consistent within all of the graphics that we currently have. That's not so much my fault; I did not make the originals that many of those have been based off of.

However, those three images of yours which I linked ARE the correct perspective.

What we're aiming for is something similar to that used by Warcraft II, or Age of Empires.


The reason I stress this whole perspective issue is that a number of people draw images with a perspective coming from 0Ã‚Â° above horizontal, which is completely wrong. Telling them to shoot for 45Ã‚Â° makes them pull hard enough in the right direction.
Top

CM, I don't find fault with your calculations, i think they are probably more or less right. The terrain is generally supposed to appear from a 45Ã‚Âº angle. However there are some other issues.

* Terrain, buildings and units all contain inconsistancies of perspective and scale, between each other and to a lesser degree within each catagory. While we attempt to keep the discrepancies from being jarringly obvious, it is not possible to represent all these things distincly with a mathematically correct perspective and scale. The scales of units and terrain/buildings are very different, but purposely left indefinite.

* There is purposely no attempt to move at a realistic speed. (This is a from-the-top development decision) The speed of movement when moving or attacking is dictated by gameplay convenience, which happens makes it ridiculously fast, from a realism perspective. There are no "stides", the feet slide all over the place, and it's so quick most people never notice.

* An approximate 15Ã‚Âº prespective should continue to be used for the creation of unit graphics because:
1) We have years of work in thousands of unit frames from this perspective.
2) A 45Ã‚Âº prespective would be less interesting, spending more pixels on the top of the head, rather than the face etc.
3) The more we abandon the more distinctive/memorable perspective for a mathematically consistent one, the more the inevitable inconsistancies become obvious. (a major reason the people in Incredibles seem more real than in Final Fanasy-the spirits within. Also Pixar rules)

CM, don't take this as criticism, i've been meaning to explain this. You were right:

P.S. when you've posted and you realized you have more to say before anyone has replied, please edit you posted instead of double or triple posting.


EDIT: and as i'm posting Jetryl posts the exact opposite advice. I ask him to concider my arguements.
Feel free to PM me if you start a new terrain oriented thread. It's easy for me to miss them among all the other art threads.
-> What i might be working on
Attempting Lucidity
Top

Telling them to shoot for 45Ã‚Â° makes them pull hard enough in the right direction.

We have years of work in thousands of unit frames from this perspective.

So, with the exception of the images I've already set at 45 degrees and Jetryl has OK-ed, I should use 15 from now on?
Top

I know that those 45Ã‚Â° versions looked exactly as the sprites should look; I'm curious to see if something else is or is not correct. Try some of the angles inbetween 15Ã‚Â° and 45Ã‚Â°, and show us the results.


From my experience with marathon, it is not a make-or-break situation. Marathon regularily used the same 0Ã‚Â° sprites to represent everything from -45Ã‚Â° to 45Ã‚Â°, and it did look palatable at the extremes, if not preferable. As a matter of fact, it probably looked a lot like the sprites over in GalaxyMage (a 3d game which borrows our images).

What is true, however, is that though the game will look acceptable if the perspective is somewhat wrong, if it is right it will "pop" into looking excellent.

Also from my experience with both marathon and wesnoth, this is why I am never going to work on a sprite-based game again, after I'm done with wesnoth. It scales well only to very small projects, and invites all sorts of hideous problems, like what we're dealing with here.
Top

I apologize for how long this has taken me--I've been putting off figuring out where each of the cameras needs to go to make the models appear to run at 30 degrees off the x axis of the view at each of the different perspectives.

Because this is going to be a big deal, I decided not to make the image perspective perfect. Each of these is at exactly the degree they say, but they're not running in the right direction (wouldn't work on a hex).

I think this is sort of interesting--I definitely don't think 15 degrees is what Wesnoth is using now, but I'm not sure 45 is the best either.

Please let me know what you think or if you'd like to see more of something else.

And here is the horse running at 45 degrees.

Creative Mechanism wrote:I think this is sort of interesting--I definitely don't think 15 degrees is what Wesnoth is using now, but I'm not sure 45 is the best either.

Please let me know what you think or if you'd like to see more of something else.

You are right, the 15Ã‚Âº angle isn't as typical as i had though, especially for mounted units. 25Ã‚Âº seems more typical of what we've done.
Feel free to PM me if you start a new terrain oriented thread. It's easy for me to miss them among all the other art threads.
-> What i might be working on
Attempting Lucidity
Top

Yeah - this has been very informative.

I think that somewhere between 25-35Ã‚Â° (probably more towards the lower end of that) would be correct.