Do you even know how dishearthening such a lack of feedback can be?

me: Welcome to the real world. If everyone says your art and opinions suck, it's because they DO suck. Even if you're too damned proud/stupid/both to realize it.
danny_california: yep keep telling fairy tales.
Top 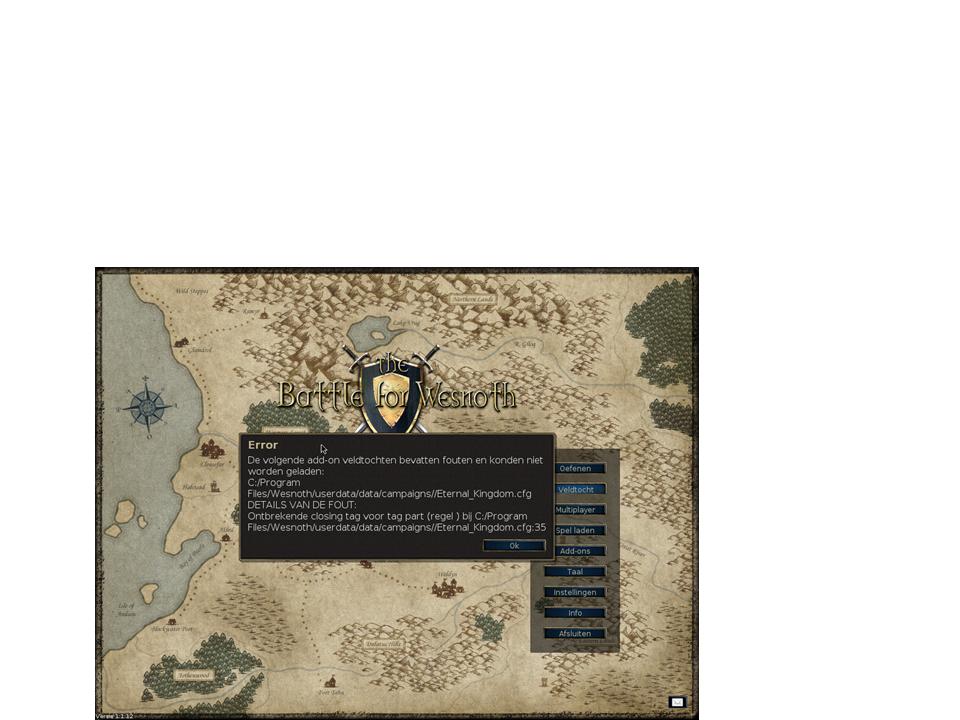 I got the same error, but in English, trying to start your campaign. Using version 1.1.11 of Wesnoth.

You forgot to include an end to the tag [part] in the 3rd scenario. Here is the fixed scenario. Replace your 3rd scenario with this and it should work.

The second scenario still has the bug I mentioned on the previous page. Here is the fixed scenario. Do you not want Mef to have the crown next to his head? Because if so, post in the WML Workshop forum. a question asking how to replace the usual "canrecruit=1" overlay with a transparent overlay, which, with the fixed scenario, would make it look like Mef wasn't the leader without resulting in defeat when you end your turn.

The dialog in the 2nd scenario is a bit disjointed. No one says the word "wildlife," but the elves say that that is what Side 1 said, and are insulted by it.

The 3rd scenario doesn't work because in the WML, there was side 1, side 3, then side 2. The sides have to be in order. It has been fixed. The other problem is that you misspelled merman as mereman.

The bandit leader is never recalled because he is never on side 1. You need to kill side 3 except for the leader, then store him and unstore him while changing his side to side 1. I'm not sure how to do all that offhand, but Zookeeper probably knows. Post a question about this paragraph, along with the EK_1.cfg scenario file, in the WML Workshop forum. Sorry I couldn't be of more help.

Last of all, in the 4th scenario, there seem to be a bunch of stuff that will create bugs, 1 of them being that Mef cannot recruit. The others are that none of the sides have leaders, but are not set to not having any leader. See the first scenario in Taurus's campaign, Northern Rebirth, for an example of how to do that correctly. You should probably post the 4th scenario in the WML Workshop forum as well.

Sorry for the lack of feedback. I'm getting the same errors as reported above:

And I just deleted my entire preferences folder for BfW and downloaded the campaign.
Top

Well, I've uploaded a new version. And it works on my comp. So if you have any more errors, then I have to looks more seriously into making it windows compatible (even though I find that win (versions 1.11 to Vista) sucks ass).
me: Welcome to the real world. If everyone says your art and opinions suck, it's because they DO suck. Even if you're too damned proud/stupid/both to realize it.
danny_california: yep keep telling fairy tales.
Top

Good news! I can play now. Your fix was successful for me, at least.
Top

What operating system do you use, martenzo?
Top

Linux, Fedora Core 6
me: Welcome to the real world. If everyone says your art and opinions suck, it's because they DO suck. Even if you're too damned proud/stupid/both to realize it.
danny_california: yep keep telling fairy tales.
Top

I cannot seem to find an updated version of your campaign on the campaign server. There's just 6.2.
Top

I don't think I changed the version number. I'll change it to 0.6.3 right away.
me: Welcome to the real world. If everyone says your art and opinions suck, it's because they DO suck. Even if you're too damned proud/stupid/both to realize it.
danny_california: yep keep telling fairy tales.
Top

In the second scenario, there is a minor dialogue problem, which is that when Mef is supposed to speak, the speaker is called Malil, not Mef. And for some reason, the Outlaw leader is never recalled. I suggest that you post the sections in the first scenario that involve Nirmin in the WML Workshop Forum, because you are more likely to get help from there.
Top

We like playing your campaign, but we have a problem when completing the 'river path' scenario. Well, a couple of problems. The first is that the victory conditions don't match the objective, because to win you can't just reach the northern edge of the map, but have to be specifically in the NE most corner. Defeating the green leader also gives a 'victory' message, which we don't think it should given that it is not in the objectives list.