The feedback link doesn't work. Try this in your _server.pbl:
[feedback]
topic_id=48353
[/feedback]
Try out the dark board theme.
Top

For the intro:
First off, I will say that the ideas expressed in the intro are beautiful. As a writer myself, the actual meaning you were striving to put into words was lovely. But the words that you use to convey the ideas don't always work. This is quite understandable, as English isn't your native tongue. But as it is mine, I can give you some suggestions on how to get your point across better.

The intro's probably the most important part of your story, since that's the first impression your readers are going to get. It's also the most awkward linguistically for you, probably because it's an unbroken monologue. I have some suggestions below, but those are mostly grammatical errors. If you care about the flow and structure of the intro, I can give you some ideas on how to help with that as well.

"In my deepest slumber was hearing voices of resentment" ---> "In my deepest slumber, I heard voices of resentment"
"remnants of a grieful song for the beloved lost" not sure what you're trying to say there. Do you mean they were singing a song for the lost/dead souls? Then something like "singing a mournful song for the beloved lost" would work much better. Or "singing a mournful song for those they had lost".
"Suffering while thousand blades" ---> either "suffering while a thousand blades" or "suffering while thousands of blades"
"As soul that pulls itself outside their intended direction" again, not quite sure what you mean. I'd suggest something like "As a soul that pulled itself away from the intended direction"
"Under the starfull sky" ---> "under the star-filled sky"
"an old acquaintance, pleading for help to anyone" there isn't anything grammatically incorrect with this, but I personally feel like "an old acquaintance who pleaded for anyone to help, even the spirits of the dead" is much clearer and flows better.

I don't want to overload you with too many suggestions, so I'll stop there. I do have a question, though - I can't summon anything, even after I've been given the option in the Drowned City scenario. Other people seem to have the same problem, so I guess it's a coding issue?
Top

What are you supposed to do in the Lone Farm sidequest? I got it from Adriath when searching for Kazur's seals, went to the farm and did the quest
Spoiler:
killed the t3 ghoul and read the diary,
which pointed me towards the
Spoiler:
Caverns,
I think? But when I went there, I found no one that I could interact with concerning the sidequest, even though I have looked pretty much around the whole map. And I cannot finish the quest by speaking to Adriath, too.
Top

I can't seem to find my way out of 'Rebirth-The Chosen Glade' I'm currently on turn 136. I'd be saying I'm overlooking something if it was not for the Lua error messages that I'm getting. Here are some snap shots https://drive.google.com/drive/folders/ ... sp=sharing
Top

Sorry that I write this late, I am seeing the issues about the coding and the chapter III. To tell the truth, I'll never have thought I'll ever find myself time to code again. Thank you for your patience, but resuming this project has proved difficult because inconsistencies between chapters, so I'll need to revamp the code it before adding the next chapters.
Top

Okay cool; thanks for the reply.
Top

Hey mate,
a Lua error occurs the first time I try to evoke a Soulless. I believe this is due to an extra bracket. However I'm a total newbie when it comes to programming so I could be wrong. Have attached a screenshot for you.
Cheers 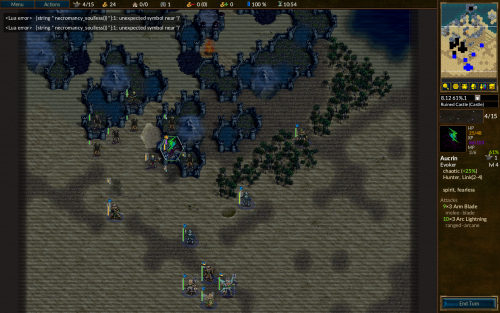 EDIT:
Another bug; Fighting in the "Chosen Glade", the enemies get banished and the dialogue occurs. Seems like the scenario should automatically end however once I end my turn more enemies spawn (about 15 of them) and when i kill them another error message occurs. I have attached the screenshot. Not sure what I'm meant to do from here :/

EDIT 2:
Just noticed this is the sane problem as the previous post. Whenever you get around to it is fine

Please note that unlike a few previous posters I did not go see the mage to do the Lone Farm side quest, I just happened to explore there while searching for the three seals. Not sure if this is relevant or not so I thought I would post it anyways.
Top

Regarding the problem with evoking a soulless, as previously posted, there is indeed an extra bracket after 'necromancy_soulless()' in the 00_Beginning.cfg File. Removing that gives you the ability to summon a soulless but gives you another error, which prevents your energy from decreasing. To fix that, you have to change the 9 in this line 'local cost = wesnoth.get_variable('evocation[9].energy')' from the Evocation.lua file to 1: 'local cost = wesnoth.get_variable('evocation[1].energy')' . This only works though if you start a new campaign. If you already have a save file, you have to edit the Evocation.lua file the same way as mentioned above, but instead of in the 00_Beginning.cfg file you have to remove the extra bracket in your save File. To do that, you need to decompress the .gz save file with something like 7zip. Then you have to find the 'necromancy_soulless())' part, remove the bracket and save your file. Then you need to compress this file to a .gz file (for example by using an online converter) and put it back in the saves directory for wesnoth. Loading that file should do the trick. (:
Top

Hi! Currently playing this wonderful campaign (I really like these RPG campaigns hehe).

Playing "The Dream of Breathing - Part 1" I encountered this error when defeating Kazuul and he attempted to "bind" me.

I tried to use next_level to skip it, but it ended the campaign.
Top

I uploaded a minor bugfix for this and that. Check it out.
I'm rewriting many things to fix many plot holes I was leaving behind.

Playing "The Dream of Breathing - Part 1" I encountered this error when defeating Kazuul and he attempted to "bind" me.

I tried to use next_level to skip it, but it ended the campaign.

Hi, I got as far as here until there is an error that prevents me from going out of this map...

Please find the save attached for your reference. Thanks!

Would you like to translate the Battle of Wesnoth into Indonesian? Then come and join us at http://www.wesnoth.org/wiki/IndonesianTranslation
Top

I am lost in Alta of Fire. I inspected the caravan and I should live the map, but I can see no exit points. Not to the spectre's cave, not in the direction of the sanctuary. Did I hit a bug? Or should I do something?
Top

Hi! This is an amazing camapaign, but chapter 3 doesn't work: I can't go anywhere except to the Altar of fire, and in there I can't go to the grey spirit's castle and I can't go back to the Sanctuary either.
The rest works perfect.
The question isn't who's going to allow it, the question is who is going to stop me.
Top
Post Reply
58 posts