Also, not sure why i didn't see these two addons of mine on the 1.11 addon server anymore. Did i miss anything?

(re-uploaded)
The Flight of Drakes, Only Death Behind, ??? (not yet sure how the third part will be called).
Top

What you uploaded them onto was the 1.12 server. I think that the current versions of 1.11.x are actually pre-1.12s in disguise.
A witty saying proves nothing.
-Voltaire
Top

This is a very nice campaign (so far). I just wanted to mention a few things regarding the first scenario before I forget.

Regarding the objective:
Spoiler:
At first, it wasn't clear to me that you had to bring back 3 WC's to the keep and revive all three ghosts. Maybe you can add a narrative hint after you revive the first ghost. Unless I missed it.
Regarding the scenario defeat conditions:
Spoiler:
I did not lose even after I had no more humans to possess (I still had one ghost left to revive). I defeated all the enemy units. Maybe make it harder to kill the enemy leader.

blackjack wrote:What you uploaded them onto was the 1.12 server. I think that the current versions of 1.11.x are actually pre-1.12s in disguise.

Aha, thanks, that makes sense. Or might make sense, not sure if it actually does. Anyway, since the campaign is simple, i'm going to maintain it and fix stuff for both versions anyway, until 1.10 gets deprecated.


Chief_Chasso wrote:I just wanted to mention a few things regarding the first scenario before I forget.

I'll try to check this out again (:
The Flight of Drakes, Only Death Behind, ??? (not yet sure how the third part will be called).
Top

I began the campaign today, on a 1.12.0 wesnoth version, in "normal" mode.
Seems quite enjoyable, although I just began the second scenario.

Some of my thoughts so far :
- The first scenario is far too easy once you understood you can take all the villages and block the ennemy castle before your first attack (especially easy as the ennemy leader wanders from village to village). As a result, I did not have to recruit anybody and finished the scenario with a huge amount of money. Except for that i find the idea of using corpses to get a new body for a ghost very nice.
- The second scenario indicates that each leader can recruit a particular kind of unit. It is true the first time, however whenever a leader recruited its special unit once, he can recruit any of the three possible. I suppose this is some kind of bug.
Top

Anyway, anywhere beyond the first few levels you'd be mostly recalling rather than recruiting, and i didn't code specialized recall (not sure if it's easy). Also you see complete recruit lists when no leader is selected. But i still couldn't reproduce the problem the way you described it.

Yeah, the first level is easy.
The Flight of Drakes, Only Death Behind, ??? (not yet sure how the third part will be called).
Top

Yay, somebody plays wesnoth in real life, not only on these internets of yours! Update v1.0.3: my friend reported a crash with merman recruiting on the last level (s/merman initiate/mermaid initiate/), so i got it fixed, i think. Also, made me realize, it's so great here when everybody thinks you're yet another 11-year-old and expects nothing from the story or the plot and will pat your head anyway, whatever garbage you let out of it, but huh, talking about my campaign in real life

how embarassing.
The Flight of Drakes, Only Death Behind, ??? (not yet sure how the third part will be called).
Top

01 Back to Life: Some typographical errors in the dialogue:
"I wonder if i can just break it."
"As far as I understand, all we can rely on is necromancery."
An interesting and creative first scenario.

02 The encounter: A pretty easy scenario, although killing the mage of light was difficult (I poisoned it with a ghoul and then waited until it was at low health).

03 Memories: "I must admist this guy has really hurt me though."
One of the more difficult scenarios because of the fire elementals and lack of villages in the center to heal. The lich is easy to kill once you slow him.

04 Ancient Ruins: "And once he went on a quest that had lead him to one of the oldest items, that was created long before the human history." (should be led)
"Consulting the stolen archive books from time to time, he has lead the travellers and their undead servants to the north, away from human settlements."

(Story) The Destinies: "This eventually lead him to merging whatever magic powers he had into a great weapon..."

05 Seekers of Legends:
"Eternal life? What a non-sense. How has he ever came up with such a weird idea?"
"I don't even want to think about it. Not loosing you again, Ellie. No way we do that."
Quite an easy scenario; can use your leaders alone to kill the orc leaders.

06 Moment of Truth: "Loosing friends is much harder than dying, you know."
I didn't expect that twist! Killed the undead leader by spamming lvl 1 skeletons and fire guardians with leadership. Would be a difficult scenario, except you get a massive amount of gold.

07 End of the day:
"All he wanted is that nobody else in the world had ever felt the pain he came through." (would ever feel?)
"With the help of his undead enemies Nygwyn had recovered the ancient Hammer of Hennet from the abyss where it stayed for centuries." Do you mean allies here?
"Then a new kingdom shall arize on its ashes."
Another scenario which would have been difficult, but was extremely easy since you have a massive amount of gold.

General:
I found this campaign on the Normal difficulty to be maybe too easy; you usually only ever have to use your 3 leaders to win the earlier ones and in the later ones you get more gold than you can spend.
I found it really strange in Memories when you find out that the second ghost is a female but she clearly has a male portrait. Perhaps a generic ghost portrait would fit better?

I enjoyed playing through your two campaigns. Thanks for your hard work.
Screenshot playthroughs: Let's Play Dead Water, Let's Play Invasion from the Unknown and Let's Play After the Storm
Top

Woohoooo, thanks a lot for your help with the grammar. Balance i may learn (maybe some day...), but language help for a non-native speaker like me is invaluable! Will fix as soon as i get there.


I found it really strange in Memories when you find out that the second ghost is a female but she clearly has a male portrait. Perhaps a generic ghost portrait would fit better?

Yeah, that's a certain mess. Probably, rather than changing portraits, i need to say it more clearly at the beginning that we're not sure how many girls are there in boy's looks. Even though later we know for sure that
Spoiler:
the three ghosts are one boy, one girl, and one elf-girl
, it's better to hide it at start, i guess...
The Flight of Drakes, Only Death Behind, ??? (not yet sure how the third part will be called).
Top

Great Campaign! I love add-on campaigns! Continue with them

also: I played "The Fate of a Princess" and "A Rough Life". Cool campaigns! All of you guys are great!
My steam : http://steamcommunity.com/id/DanTheAssassin/
Top

Just finished FoD and ODB campaigns and wanted to comment that I really enjoyed them. Drakes are so fiercely loyal, one of my favorite units, so I liked the first campaign better. I thought The Promised Land in FoD was the most balanced scenario. I would have liked less poisonous spiders/scorpions (who doesn't, right?) and more villages on our side of the river, but I thought the large map with the crooked river was well done. I played it twice, the first time I rushed headlong into the river, bad idea.

I do miss having healers. But I see how using villages causes us to think more strategically about who we can afford to lose for awhile while they heal. When we have a healer who travels around with us, we don't have to reply on the healing rotations to the nearest village. Knowing you have to travel and wait at a village and that there are not many villages makes a player a little more cautious, both with who is wounded and who is still fighting.

I really liked the twists in the story at the end of ODB and would like to see where the story continues, and if it pivots back to the Drakes.

One problem I encountered in ODB was inconsistencies with plague. Someone else also mentioned having that problem here as well. I'm using an older version, so it may have been fixed in campaign revisions, but that would be odd because plague has worked ok for me in other campaigns using this same version. A few times I wanted to use plague-fodder and it didn't work. But ODB was a breeze to play, so it wasn't a big deal in the scheme of things.

Is the trilogy finished?
If not, I sure hope the final campaign is in the works...and has Drakes!

Example of plaque inconsistencies that plagued me: 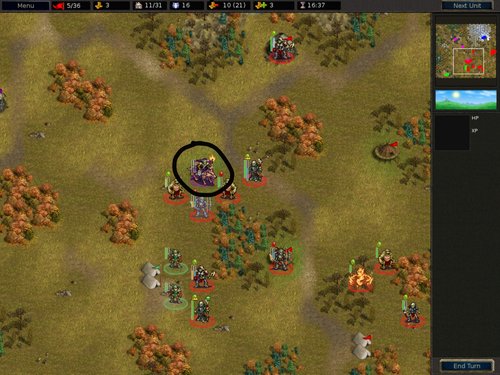 Hunting a Pillager in Seekers of Legends. 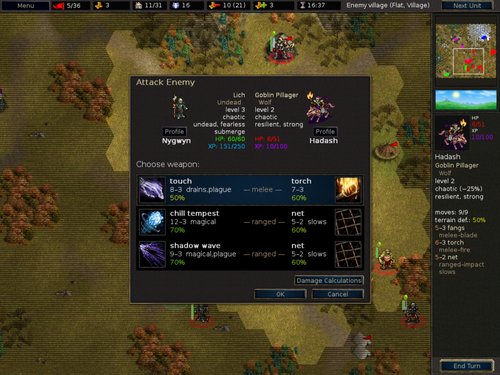 Used the Liche's "touch" with the Plague ability. 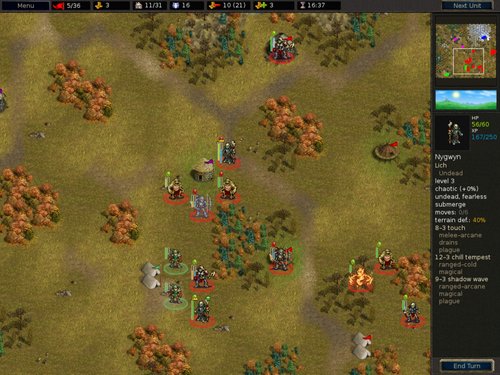 The Pillager is gone. Plague did not work here for some reason. I should have a new zombie-dog. 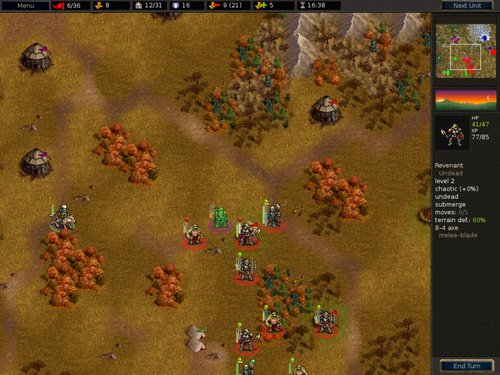 Next turn, same scenario. Going to bag me an Orc Crossbowman. Note that I used the Liche's "touch" both times. 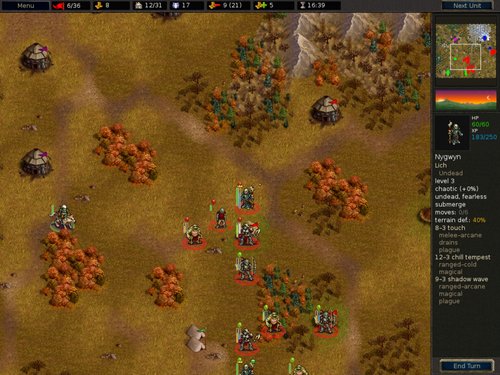 Scored one zombie for team Red this time.

Sometimes life unexpectedly throws a Troll or a nasty Queen Naga in your path.
Top

Happened to check on this thread and just wanted to say that the the "bug" with the plague weapon special isn´t really a bug, it´s working as intended. Units that are standing on villages aren´t affected by it.
Top

I just tried downloading 1.0.3 from the Wesnoth 1.12 server, and playing it on Wesnoth 1.14. With Wesnoth 1.14 the type= in [side] is mandatory, which causes an instant defeat at the start of scenario 2.

You can put any value in for the type, even type=Mage of Light still recalls your necromancer...
Top
Post Reply
28 posts