The Library of Kratemaqht [SP Campaign]

Great, thanks for the help

I can transfer saves of current games to slightly newer versions of Wesnoth, right? (He said hopefully)

Please let me know if that works.
Top

Hey, Played through it. The Zombie-Level was a real RNG-Hell, the rest of the game is enjoyably designed. I just don't know why it is 50 MB. I played Song of fire, 39 Scenarios, and its only 16 MB (without the Music pack).

In other words: It was too short, but that would not be an issue if it wasn't good. Do you plan to continue the Saga?
I do GPE(Genuine Playing Experience), Screenshot-reinforced and detailed Bug-Reports for Campaigns. If you want me to check yours, be it Pre-Alpha, Alpha, Beta or finished, let me know. Since I don't know anything about coding, I'll be unable to tell you why something bad happens though. PM me.
Top

Krolan wrote:Hey, Played through it. The Zombie-Level was a real RNG-Hell, the rest of the game is enjoyably designed. I just don't know why it is 50 MB. I played Song of fire, 39 Scenarios, and its only 16 MB (without the Music pack).

That's because of the dragons Akrinas and Kratemaqht, which use dozens of sprites each. I used the sprites of Krate for Svarballi in my campaign, and even though I only used some animations, his folder alone was 4 Mb

Author of the Dragon Trilogy.

If you enjoyed A Song of Fire, War of the Jewel, Aria of the Dragon-Slayer and Soldier of Wesnoth, you may like my new project: Star of Chaos, a science-fiction mystery/adventure intended to be a trilogy ;-)
Top

Wow. That's one resource-hungry dragon. No wonder he survived all these thousands of years^^ Still wonder if this Campaign is still being developed or if it is on hiatus.
I do GPE(Genuine Playing Experience), Screenshot-reinforced and detailed Bug-Reports for Campaigns. If you want me to check yours, be it Pre-Alpha, Alpha, Beta or finished, let me know. Since I don't know anything about coding, I'll be unable to tell you why something bad happens though. PM me.
Top

CannonFodder wrote:[...]having those 0% defense spots may be worthy

Having such a thing is rather a mistake in design. (...)

I thought it was intentional, and okay by the game's mechanics (it didn't feel off for me, maybe because long before I also played To Lands Unknown in which there are a few 100% hit attacks). Do you mean here that it is a problem gameplay-wise, or that it uses Wesnoth's API in some unintended manner (which later is a definite "must fix")? I could imagine my men getting ambushed by a bat there while they are attempting to cross, watching my old replay even shown that those spots had their role in creeping me out.

For Kratemaqht's voracious appetite for megabytes, I whacked together some solution, so to put him on a treadmill for good:

Using this script I managed to trim the dragons directory down to 21 megs (containing three dragons) with barely any noticeable loss, I think perfectly acceptable for the purposes of the game (I tested it to see). I might experiment some more, for example adding scolorq to get better quantization. By the way where are the original sources of this dragon? It might need some work to make him more practical, for example as of now it looks like he uses a huge canvas compared to his size (well, he IS a dragon, so deserves it :p ), even in the fire-breathing and flying frames. This is not a concern for the size in terms of disk space (or network bandwidth), but memory consumption when Wesnoth uses it (currently with the 432x432 canvas size, the 780 images of the ancient dragon all loaded would eat a half gig of RAM expanded in 32 bits Alpha-RGB, unless there is any trick within the game).

After a good length of additional experimenting and probably trying out probably every reasonable solution, now the dragons directory is just 13 megabytes! (5.2 megs for the ancient dragon, 5.2 megs for Kratemaqht, and 2.6 megs for young Kratemaqht). The most important thing I got to oversee is that the stripped down images were still saved as RGB-Alpha, which is much larger (Gimp doesn't know about the Indexed-Alpha format). Of course I tested with the game, it loads Indexed-Alpha PNG images all fine. While I think the result is fine as-is, of course it is possible to do it with less reduction (such as 256 colors) which will still slim it down greatly.

If you can't run the scripts I posted on GitHub yourself, but interested, I might upload the result somewhere, I just don't know about an appropriate place for it right now.

I did a test run converting the dragon to 256 colors, the results: 17.7 megabytes total, 7 megs for the ancient, 7 megs for Kratemaqht, and 3.7 megs for young Kratemaqht. There is truly no perceivable loss this case (with 64 colors, it is barely, but noticeable).

I added some sample images, selecting one where the quantization is probably the most noticable due to the many colors: a frame of the fire breathing animation. 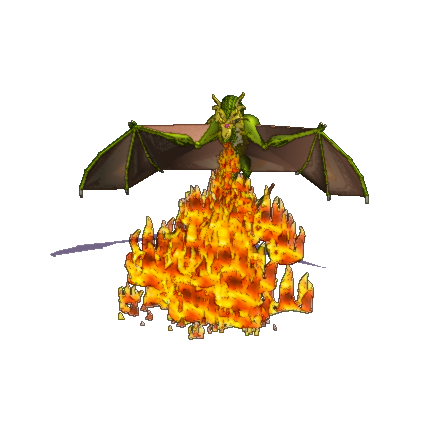 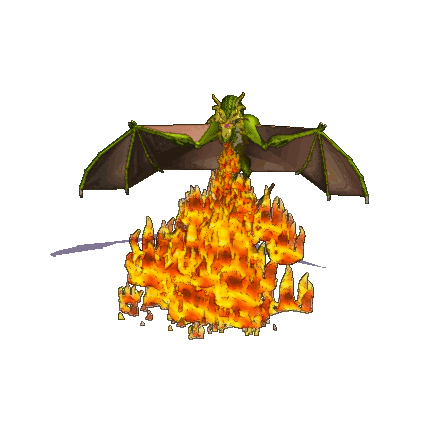 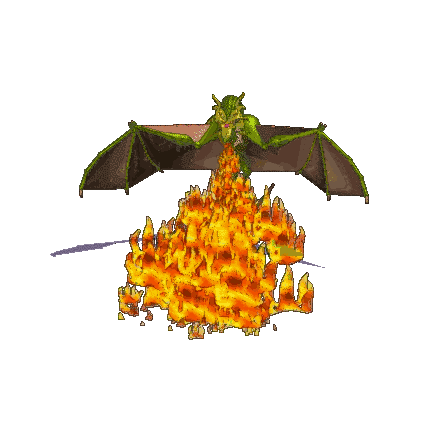 I happened to stumble upon PNGQuant, an insanely good PNG quantizer which leaves Gimp (or any other thing I tried) in shame in both quality and speed. Of course I got to find it after I wrote my own quantizer... (which is also nice, just a bit slow). Of course I wrote a suitable batch script for it to see: well, it is definitely a blazing fast weight loss solution for this dragon, better results at the same size (got 12 megs for 64 colors, 18 megs for 256 colors).
Top

I'd like to suggest that these units as they are a poorly balanced, and that the fix is to make them level 0/1/2 rather than level 1/2/3.

Scholar (HP 42, 20 gold + 30 XP, melee 6-3) is almost competitive with most level 1 units. It for example, is rather close to the Goblin Rouser I mention earlier. Elvish Shaman (Heals +4, HP 26, Cost 15, 3-2 Melee and 3-2 Ranged Slows, only 32 XP to advance) compares favourably with its terrain affinity, balanced melee and ranged attacks, and slows ability, not to mention that Elvish Shaman advances to vastly more powerful units.

Professor (HP 54, 20 gold + 30 XP + 50XP, melee 7-4) is a terrible level 3 unit. Bandit is a close approximation, but only level 2 and only 13 gold + 42 XP. White Mage, with its magical attack and heal +8 is also clearly superior at level 2. Level 3 leaders, like General or Elven Marshall, are clearly out of this unit's league with their multiple attack types and terrain affinity.

The solution for this is to make student level 0 and cost 9, and to reduce the XP cost for Scholar to 20XP.

Though honestly, the whole campaign is easier to play without these units. Peasants outperform Student in combat, have lower cost and no upkeep, and advance to better units. The campaign leaders already have leadership and better healing.
Top

Having just finished this campaign, I have to say, I think it is fantastic, and I think it should be added to the mainline campaigns. It effectively creates a sense of the horror of this new thing, the undead, coming into the world.

I only noticed one minor bug myself, one of my students, for no reason I could discern, leveled up into a mage who could throw fireballs whereas the rest just became professors . . . or is there something I'm missing with that and it was not a bug?

Anyway, great campaign, very well designed, and I hope it gets added to the mainline campaigns.
There may be more than one way to skin a cat, but however you do it, he's gonna scream pretty loud.
Top

Hi, I like the campaign however i can't get past "a visit from old friends," the escape from Cahal's castle. Is there something I'm missing? It seems like the guards are just too strong. I haven't even gotten to the point of trying to fight the spectre yet.
Top

I created a resource add-on Rich Marinaccio's Dragons with the dragons images and animations created by cephalo for this campaign.
Since the dragons are excellent, I think if someone creates a campaign with dragons he may want to use the resource.
Author of SP scenario Dragon Fight and SP campaign Captured by a Nightmare.
Created The Rise of Wesnoth (alternative mechanics) version of the mainline campaign.
Top

CannonFodder, thanks for scripts and instructions on how to resize the images. I updated the resource add-on, now it is 17 megabytes instead of 45.
Author of SP scenario Dragon Fight and SP campaign Captured by a Nightmare.
Created The Rise of Wesnoth (alternative mechanics) version of the mainline campaign.
Top

Hey, is this thread still active? Is the campaign still in development (and is there a sequel?) I’m thinking of writing a walkthrough for this campaign. I really enjoyed it—the story is very compelling, and I especially loved the dragon (of course) and all the little things that made it believable—and I think it would help more players enjoy it if there was a walkthrough.

I also have some gameplay suggestions, which I hope will be appreciated. Oh, and I can also translate the campaign into Romanian (if anyone is interested!)
The dwarf Lord said to his guardsman: 'Quis custodiet ipsos custodes?'

The guardsman replied, 'Only a fool could get a guardsman killed.'
Top

Alex-Stargazer wrote:Hey, is this thread still active? Is the campaign still in development (and is there a sequel?) ...

No, the campaign is no longer under active development and - contrary to a prior statement - there will be no sequel. The author simply does not have enough time to spare for a successful continuation of this project.
Top

I enjoyed the campaign. From my opinion it would be a really shame to let it vanish, it makes amazing insight into the Old Continent and prequel to TRoW. I know, we have limited capacities, but it would be nice to find some new maintainers to finish it. From my newbie point of view the history and factography in the campaign is so consensual and enlarging to the existing world of Wesnoth, that it would be reasonable to make it mainline after some additional work.
Top

Hi everyone, I was thinking about updating this for 1.14, but the problem is that it's been sooo long, I don't remember anything at all about Wesnoth creation. I found the files on my computer, but if I remember correctly, I need to run certain tools on it to make sure it can run on the new version. So I guess I need to install python for that? I can't remember. Can someone remind me how I can play test my campaign locally?
Top
Post Reply
114 posts