After almost half year of hard work, the first version of The Devil's Flute is finally available to play!


Creona, the well-known assassin, gets a strange job from a strange person. So, in fact, it's no surprise that things take a strange turn...
? level, 10 scenarios (2 text-only)


You will likely to enjoy this campaign if you...
- like puzzles and minigames
- prefer campaigns focusing on storytelling
- don't mind that it's a bit short
- are curious how do these things look in real life

I'd highly appreciate some help with...
- revising the text. As you could have noticed, my English skills are limited
- artwork. You really don't have to be an expert to help me out with that, almost all custom graphics in the add-on are bad frankies of mine
- of course, the so-called balancing...

What version of wesnoth do i need for playing it?
¡Salud!
"I was pulling a barrow, when I saw a stalking horse
what a beautiful day!- he said- for visiting a red herring
and getting hoarse."
Working on this campaign: The septentrional tower
Top

I tested it on 1.9.14, so presumably it works for 1.10 too, and I'm not aware of anything which would prevent it from running on the 1.9.x series in general.
Top

A hotfix version (0.1.0a) is uploaded to fix a bug messing up about half the dialogues in scenario 2.
Top

Looks like a good campaign you got there with lots of interesting elements to it. Seems like you've spent a lot of time on things like music and story, making good use of humour and themes, which I think really add to the feel of a campaign.

Whilst I haven't finished or played it fully, I think I can give you some of the feedback you are after (as a campaign author myself I am pretty quick at scanning for things).

First level is great and reasonably finely balanced IMO.
I especially like the scenario with the bar. That's done perfectly IMO.

Here's a list of bugs I have identified:
- in scenario 3 (with water) the top castle recruit hex is off the map and the water+forest tile has the boundary mix with water/land the wrong way around
- in scenario 4, the intro text at the bottom says "it'd" and misses the "be" in "it'd be"
- in scenario 6 it looks like you can kill the guards giving a victory sequence without bringing the talk with Merlyn
- flute music contains only... piano?
- the addon doesn't have an image from default image locations (meaning it is blank on other people's computers)

Balance:
- From a more casual look at it, it seems like you've got the first scenario about right with level 2 units, etc. but later on there aren't too many levelled up units to play against (especially on harder modes)
- Scenario 5 with Jack is probably pretty easy (maybe shorter turn limit?)
- in the scenario with ghost leader it is probably pretty easy to lure him out and kill him early on, but this kind of thing disrupts balance because sometimes it is not easy to lure out a high movement leader

Thanks for the campaign. This looks like one I want to play properly from start to finish.
Top

[acronym=Because I'm a noob]Although I haven't finished the campaign yet,[/acronym] I think you should probably make the objectives clearer in scenario 3; and maybe make it clearer which house is the arch mage's. I got rather frustrated after I sent a Fugitive and a Rogue over to assassinate him, expecting the scenario to end, and then have to have them move to the signpost.
Other than that, I like it a lot!
Top

Thanks you both for your feedback. I'm glad you like the campaign.

Scenarios with changing objectives are quite common, and I don't think that this one is any worse than most of them. If you find yourself fulfilling the objectives in the 10th turn, you can always suspect that it's not finished yet

and maybe make it clearer which house is the arch mage's

I added a blinking image onto the house during the initial dialogue, in case of somebody have missed Basyl saying "he lives in the palace. More exactly, in the cottage at the riverside"

I wouldn't say that it's a dedede, but neither a bug, really. Five hexes are enough in this scenario, and full-hexagon castles just look better

It always had been ugly, but seems that a transition change added since I last played that scenario made it even worse

I can't promise a quick fix since I want to replace those graphics entirely.

Fixed (scenario 7). Although I think it's practically impossible to defeat the loyalists (Patrick gets some compensation for every unit lost, forgot to add a note of that to the objectives, fixed as well).

Yep, I noticed that, but it was too late... you know, that's something you can't test before publishing the add-on.

From a more casual look at it, it seems like you've got the first scenario about right with level 2 units, etc. but later on there aren't too many levelled up units to play against (especially on harder modes)

Note that the scenarios with level 2 enemies (scen 3 and 7) take place entirely at night, giving a serious advantage to the (outlaw) player against the (loyalist) AI anyways.

I feel the same, but I'm not sure how many units an average player loses in scenario 3. I will make it harder as soon as I get enough complaints claiming it to be too easy.

- in the scenario with ghost leader it is probably pretty easy to lure him out and kill him early on, but this kind of thing disrupts balance because sometimes it is not easy to lure out a high movement leader

I played that scenario through about 10 times or so, and never had a problem with that.
Top

0.1.1 is up, bringing the following changes:

Regarding the water, a quick fix is more than possible. 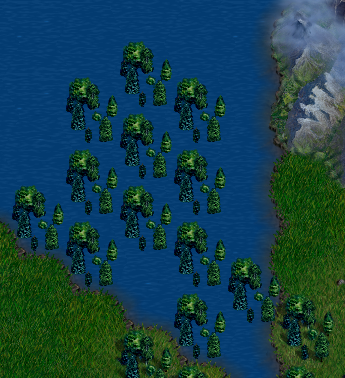 Cool! And how?
Top

Change flooded forest to an overlay terrain in terrain.cfg - I used ^Fmsz (You might also change the aliases if you want it to also count as forest)
Change the flood rule to Gg^Fms>Ww^Fmsz
Change the terrain graphics macro to *^Fmsz
Use Gimp (or other tool) to erase all the water from your images (I just used the colour select tool with a threshold of 25). This part is optional but makes the animation visible, which looks nice. Because the colour matches, it's not essential to get every bit of the water.

Repeat with appropriate string name replacements for the villages.
Top

Change the flood rule to Gg^Fms>Ww^Fmsz

I just finished the campaign and enjoyed it a lot. The story, music choices and scenario variety were all very nice.

In Anyguest's Inn, I couldn't remember what the 4 guests said when I'm supposed to guess which one is fake. It was easier to just randomly pick one and reload the game, then loading to a few turns earlier to review the dialog. Since it's intended to be a logic puzzle, I don't think it should require the player to memorize the clues. Either let the heroine take notes, or allow her to revisit the rooms and listen to the guests' lines before making a decision.

In Merlyn, is there a clue as to which house he lives in, or is the player supposed to just try their luck? (Edit: the post below explained it.)

In Zombies in the Stable, pushing a walking corpse off the screen makes it disappear, and if there's no more walking corpse on the screen, but some were pushed off screen instead of into a stable, the game doesn't move on. I suggest that if the last of the row of walking corpses is at the screen edge, they don't get pushed but still get stunned.

I think these lines in dialogs should be changed:

Played the the campaign through on hard, thought it was great. Haven't enjoyed a campaign this much since I played Invasion from the unknown when it first came out. A few bugs and other things that might need to be tweaked:
Chaos in the city: Had to play it through three times because the nagas and saurians shifting around was totally unexpected and made it impossible to win without knowing beforehand that it was going to happen. Perhaps if they were not moved so much or if there was warning given of this it would not be such an unescapable trap.
Zombies in the stable: same problem as hagabaka mentioned above, either move the stable further away from the edge by enlarging the map or make it impossible to knock them off the side of the map.
Merlyn: on the first turn I put Basyl in a village a little ways away from my keep and he was teleported into the town, at which point I had to move him to the tunnel and back again to trigger the events in the right order.
Prelude to the Finale: Basyl's "Are we yet there?" should be "Are we there yet?"
Danse Macabre should be Dance Macabre
Didn't have any problem figuring out which house Merlin was in or which room Bruggwy was hiding in, seemed pretty clear to me. Maybe you could make the puzzles harder on the higher levels.

Greatly enjoyed the campaign overall, although most of it was a bit easy for hard. Favorite scenario was the bar room fight... loved how you did the tables

Thanks for your hard work.

AlaskanAvenger wrote: Merlyn: on the first turn I put Basyl in a village a little ways away from my keep and he was teleported into the town, at which point I had to move him to the tunnel and back again to trigger the events in the right order.

Ah, this happened for me too, except I didn't think to try moving back out of the tunnel. Basyl gets teleported on second turn if he doesn't move at all. Now that I see the clues it makes more sense.
My favorite addon campaigns (made by others): Swamplings | Galuldur's First Journey | To Lands Unknown | The Devil's Flute
Top
Post Reply
89 posts