@ZIM
Fixed the attack count issue. Clever idea to cause an integer overflow.
Fixed the trader issue.
Can you please send me a save file where the weird Beelzebub death can be replicated?

@angelofhell_hau
I do not understand your second question, sorry.


Giant_Hogweed wrote:Hello Mr. Dugi
I'm not sure if it is a bug: I'm in Inferno I've just killed Lethalia in foul pits and entered in Pandemonium where I see, up in the middle of the scenario, an entrance without a name where i cannot get in and when I go beyond the "castel" (where you can recall units I mean) of this entrance Efraim says something like "I would never...." (Sorry I don't remeber well). Moreover when I try to kill the Uria's Avatar in pandemonium it is invulnerable to any attack and even if I poison or incinerate it.
Another thing is that I do not see the way to get to the Verminous Sewers so I cannot kill Abaddon.

Thank you in advance for your help.
Kind regards

Good sir Giant_Hogweed,
This part of the game has been verified numerous times and a cause has always been found. There are two typical causes. First, Lilith is not considered killed if you do not kill her on her keep in a far corner of Inferno and trigger a long cutscene where Uria appears. If you just kill her once inside, the objective to kill her in Foul Pits will not disappear. Another possible cause is that you did not attack Uria for sufficiently long. You have to attack her a few times to start dealing damage (but Lilith must be defeated first).

Verminous severs are inside Uria's castle, so you have to defeat her effigy first.

I hope that helped,

P. S. I apologise for the delay.
I named your units.
Top

LotI1-Soldiers_Training_Room_Turn_4.gz
Beelzebub is already infected and close to death, kill him with the remaining units.
(1.46 MiB) Downloaded 101 times

Oh yeah, I have an idea, how about if there is a weapon with purify weapon special? Can it be made?
Top

Here something wrong with The Touch of Death...whoever has fewer than 4 attack..this will be happened. And may I ask you a question...What percent of highlander trait will appear with an unit? 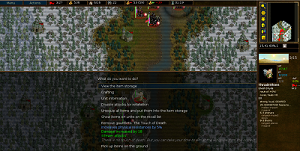 @ZIM
Thanks for the save file.

There is a purify weapon special that converts undead to living. I think that it is really strong, so it is available only through one legacy.

@angelofhell_hau
The image's resolution is too low and I can see nothing. I assume that it is the same as the picture somebody else has posted, setting the number of attacks to a ridiculously high number. I have fixed it in the github version.

The probability that a random unit gets the highlander trait is 1%.
I named your units.
Top

oh I see..I've paid hours to get an army with highlander trait...One more thing, when I use the Lycanthrope for an unit. It makes the animation of all units in sight of Lycan's unit too slow(it depends on pointer..if the pointer is far away of Lycan's unit, the game is normal..but in sighted that unit..the game is too slow - animation: move, attack...)....Have you ever planed to make part III of this series?
Top

Dugi:
I think that Belzebud is too strong: 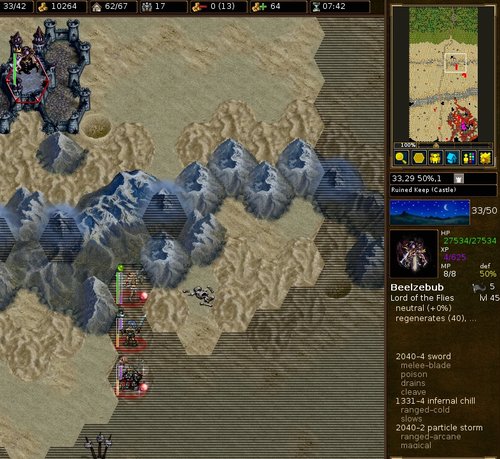 I have question about Bloodbath scenario. I summoned Bulzebud but i can't hit him.

My Lethalia has 14 attacks with focused and can't him 2 or more times.
Top

Hello, I want to report something

In the last scenario of chapter 6, I've manage to summon Beelzebub, but the dialogue sounds weird because it looks like that Efraim was talking with himself. I think it's because that Lethalia supposed to reply his saying, but she can't because the Lethalia in that scenario is the one with id=Lethalia-fake.

Also, I think that it's weird when we can summon Beelzebub many times in one scenario. I think the spawning mechanism should be limited to once per scenario.

Lastly, I found this lua error when playing in Akula's dungeon:

I don't know what cause this error, all I know that this happen in the AI turn.
Top

I was just wondering if it is possible to get units with highlander right away or if they unlock after a certain scenario. Also is there any more info on how items spawn, like statistics and stuff?
Top

#Beelzebub
He becomes terribly strong if you summon him multiple times. You should not be able to summon him more times, there is a bug that allows it, I have fixed it but it's not yet uploaded.

In which scenario was that Lethalia-fake causing problems with the Beelzebub dialogue? I have tried to place the spawns into scenarios where nothing unusual happens and ones without Lethalia are not very usual.

I have fixed the Beelzebub-almost-impossible-to-hit bug.

@gabe6044
It can appear at any time, it does not require having completed something before. You can get them already in scenario 1. Items have a certain chance to drop, some are impossible to drop in the first part of the campaign. I can compute the statistics for some individual item, but I never bothered to write a script that would write it for every item.

@angelofhell_hau
I could not replicate the error with slow lycantropy.

There are no plans for any part III. I have made three spin-offs after the two parts. I am currently working on something else, it is not completely abandoning the main characters of this story, but it is not a sequel.

_____________
Sorry for the delay, I could not connect to this site last three times I tried (and it was not in the same day). I know that this technical problem affects also others, living in very different parts of the world. Clearly, the person with the competence to fix it dwells on IRC that is not affected...
I named your units.
Top

tks god! you're here...One more thing, in the master version I've downloaded from github....it has a bug that whenever I equip weapon to an unit...it makes unit's attack reduce to 1 attack...it seem the bug with over flow integer was fixed....but it makes another bug to any weapon is used..... I've not screenshot it...if ya want, I with play with this version and take a photo for ya....
Top

gabe6044 wrote:I was just wondering if it is possible to get units with highlander right away or if they unlock after a certain scenario. Also is there any more info on how items spawn, like statistics and stuff?

The Highlander trait depends on your luck.... I spend 2 hours to make all of my unit have highlander...if ya want...I can give ya my save....about the item...ya get it random...it's an easy way to get certain items that you want... anytime kills Beelzebub....first save then kill it...if don't have anything needed..then load and kill it again...the items will be changed....it's the same to take any enemy leader down....hope ya collect all items ta need.....

You can just put the items you desire on the floor next to your position at the beginning of your next scenario by hacking the scenario file. I am not sure where to hack that highlander thingy, but should be easy too.
Top

Wussel wrote:You can just put the items you desire on the floor next to your position at the beginning of your next scenario by hacking the scenario file. I am not sure where to hack that highlander thingy, but should be easy too.

hacking is not funny.... Just give it a try.... Highlander trait has 1 % to appear on unit....Ya can recruit many units to get it...save before and try your luck....Enjoy the game that way is wonderful....
Top

Hello again Dugi and others; its been over a year since I was last here. Second kid made me drop playing, but I decided to load up Wesnoth again last weekend. I tried playing a normal Wesnoth campaign and I was bored, so I went to LotI and was hooked. Totally hooked.

I think the AoE attacks applying big lethargy is a problem. Because of that, I basically only them to slow a bunch of enemies when massively surrounded (Arctic Blast and Blizzard) and don't touch the others.

On a simpler bug report note, I think there are a couple dozen minor copy-paste errors in unit files. In concept, I think {GREATER_AMLA_DEFAULT_BONUSES} should only appear on the main characters and their near-godly friends. But it also appears semi-randomly in a few other unit files, and I think those lines should be {AMLA_DEFAULT_BONUSES}. Just search the unit directory for it and you'll see.