And that's why I asked! I haven't touched Armour of War.
Top

In chapter 10 (maybe others) the suck ability given by items won't work when equipped on virtra (unholy breed) has this happened to anyone else?
Top

Also the ability from the ashes, I gave it to a unit through the potion but it doesn't seem to work since they're at 11hp and it hasn't activaited yet.
Top

@Cashcam24
It looks very unlikely that suck would not work for Vritra, but it might be a strange combination of properties that she happens to have. If you can provide a save file where the defunct suck can be seen, I might check out what's going on.

From the Ashes is supposed to activate if the unit is dropped bellow 1 hp, so only if it would die otherwise.
I named your units.
Top

I really love your campaign, the item system and crazy AMLA stuff and all are super fun. I just restarted it after allready being somewhere in Chapter 3, because I didn´t quite understand everything at the start, and decided to do some things differently.

Starting in scenario two I get the attached error message in many (but not all) of the scenarios. I get it at the start of my own turn, earliest is turn two, sometimes only after a number of turns in double digits have passed. After that it adds another (identical) error message at every turn start.

I attached a screenshot of the error message, seems there´s a forbidden nil argument.

Edit: Just came across another bug: The amulet "Leechward" didn´t work, at least not on my General "Mario" against a Wraith. The Wraith just drained him happily.
Edit 2: Is this a bug? When you move onto a hex where gold and an item lie, only the gold is picked up. To pick up the item, you either have to use the menu uption or move to the hex a second time.

Under blood-red skies, an old man sits
In the ruins of Carthage - contemplating prophecy.
Top

The error message problem:
I am not very familiar with that, can you please write down in which scenarios does it happen and from which turn?

Leechward - found it, it was giving immunity to a weapon special named 'drain', but the weapon special is actually called 'drains'
Gold - I thought I had fixed this in the past. I'll need to have a look at it again. If I recall correctly, it happens also with gems instead of gold.
I named your units.
Top

I get this bug a lot, maybe you've already covered it. It happens almost every scenario. It happens on the AI's turn, especially when there are a lot of AI troops near mine. It seems to cause the AI to move right next to my troops (like normal) but then not attack.

On the third level, "Assassination", I get this error at the start of every turn after the first, so in other words whenever the bad guy should say something. He never does say anything or turn against me, except when time runs out, leaving me no way to finish the mission. 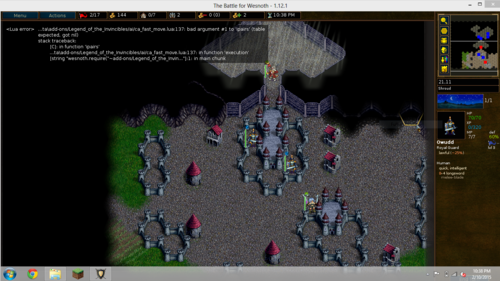 So are there any plans for more, or is chapter 10 the final chapter in this epic saga?
Top

On the third level, "Assassination", I get this error at the start of every turn after the first, so in other words whenever the bad guy should say something. He never does say anything or turn against me, except when time runs out, leaving me no way to finish the mission.

That level is also the first for me where it appears, starting with the second turn. It always adds another identical message at the start of every turn after it first occured, but in other levels it only started somewhere around turn 25 or anywhere in between. Since I played quite a lot of levels, I don´t know exactly, which ones produced the error and which didn´t at all.

@Bobit: You have to move in direct contact with the lord, then the blue player turns against you, hence the tip to get everyone "in position" at the start of the scenario. As far as I can tell it was never meant for you to fight your way through those level 3´s.

Edit: Not sure if I ever got crazylikafox´s error, but there seems to be another problem with a nil argument.
Under blood-red skies, an old man sits
In the ruins of Carthage - contemplating prophecy.
Top

About the huge error:
The error is not as bad as it seems. As I have found, AI controlled units that aren't supposed to do anything will not understand it and will try to look for something to do, so instead of just standing still they will wander around (unowned villages?) and throw that error. The real impact on the gameplay is petty. You can get rid of those messages by pressing Ctrl+X.

This error will not happen on older save files, even if you progress through many scenarios. If you sorely want it fixed, show me the save file, I can all its effects, but there will be some small regressions.

I am not capable to fix it (I have managed to hide the error message, but the units still don't stand still), but I have sent a message to a guy who can. I apologise for it.

@crudehero
10 is the final chapter. I don't think that I will release any continuations. You can try its spin-off The Beautiful Child, it gives some picture what happened afterwards, although it's mostly about other characters and other events.
I named your units.
Top

It should be fixed now. Please download the update. The fix will take place immediately.

Thanks to mattsc for helping me.
I named your units.
Top

New error message (the old error?) in the scenario "The Battle for Ogira". I played on the updated version. If helpful I can provide the replay once I finish the scenario.

Under blood-red skies, an old man sits
In the ruins of Carthage - contemplating prophecy.
Top

This looks like something different. I have never seen an error like that. Under what circumstances did it happen? Did it have any visible effect on the game? Did it happen just once? Can you replicate it? Can you please upload a save file just from before it happened (if it happens again under similar circumstances) or the replay?
I named your units.
Top
Post Reply
7445 posts