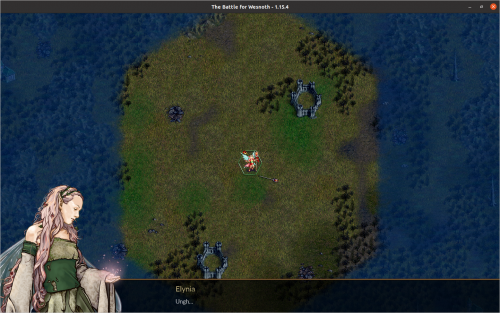 Turns out there's a bug with unit type variations not working in multiple (all?) situations in Wesnoth 1.15.4, and not just in these campaigns — the Walking Corpse unit line is presumably affected as well.

The issue will be fixed in 1.15.5, but in the meantime a lot of things will be plain broken, especially in Episode 3.
Author of the unofficial UtBS sequels Invasion from the Unknown and After the Storm (now available for Wesnoth 1.14.x and 1.15.4+).
Top

akshayg95 wrote: ↑August 18th, 2020, 3:50 am After almost 10 years I see this Campaign once again in the latest Version of Wesnoth. Lucky me to check the add-on updates in the game after like 2 yrs. Will certainly love playing the three chapters once again. Faintly do remember 10 yrs ago that it was awesome/

The Silver Lands was abandoned by its author along with Wesnoth itself about 6-7 years ago, my involvement with its development was merely that of a story consultant, and it was built upon an obsolete version of the AtS storyline which ultimately never came to be. I wouldn't expect anything to happen on that front, not even in the far future. (A similar case could be made for Shadows of Deception, but the jury's still out on that one I guess.)

Ultimately only the campaigns hosted as part of Project Ethea are my responsibility, and right now that's only IftU and AtS since those are the only ones that have received my blessing as a writer and designer.

I may have exaggerated the exact time. My bad. It almost feels as if I've played this campaign a loooooong time ago. Much has changed. Either ways, I am enjoying replaying it.
Top

Iris wrote: ↑August 31st, 2020, 12:56 pm Turns out there's a bug with unit type variations not working in multiple (all?) situations in Wesnoth 1.15.4, and not just in these campaigns — the Walking Corpse unit line is presumably affected as well.

The issue will be fixed in 1.15.5, but in the meantime a lot of things will be plain broken, especially in Episode 3.

Wesnoth 1.15.5 is out along with the fix. Hopefully there shouldn't be any new game-breaking issues, but if you find any make sure to post here so I can look into fixing them/getting the devs to fix them.

(I still recommend playing on 1.14.x if it's your first time playing through these campaigns.)
Author of the unofficial UtBS sequels Invasion from the Unknown and After the Storm (now available for Wesnoth 1.14.x and 1.15.4+).
Top

I'm thinking of assigning hotkeys for my mod's set_menu_item. For now it is:

I noticed that in your changlog it says:

I'm not sure what that meant or what the ensuing problem was exactly. Could you clarify please?
As a UMC dev, is it not recommended to assign hotkeys in a UMC because it will raise problems down the line?

AtS' case was very specific. The menu item in question was bound to the same default hotkey as the game's Recruit action because in the scenarios where the menu item exists the player is completely unable to recruit — even if they do come across keeps, their recruit list is empty and gold set to 0. Unfortunately, and this is probably more of a general thing regardless of what the key sequence is, bindings involving menu items persist in the hotkey management code until Wesnoth exits. When switching to scenarios where the menu item with that id doesn't exist (either via the normal game flow, with [endlevel], or Load Game, regardless of whether you went through the main menu first or not), the key sequence would remain unavailable for use with any other menu items or predefined game UI commands because it's still assigned to a ghost command that doesn't currently do anything.

While this particular case was more of an issue because it overrode a default hotkey for a built-in game action, once you take into account the fact that players can assign any number of custom hotkeys to as many actions as they want, and that Modifications may add their own menu items and you have no way to control that, you may find yourself discouraged from assigning default hotkeys to menu items at all. It may be good enough a compromise for the general case to just make sure that whatever hotkeys you choose are not used in vanilla Wesnoth by default.

(In general, Wesnoth's handling of game state transitions is embarrassingly bad for a game that's been supporting player-made add-ons for 16 years and this is just one more issue to add to the list.)

I haven't filed a bug about this whole thing because I don't feel that subjecting my use case to the standard development committee process (which is a thing that's existed for way longer than people think) is a good use of my time. Ideally I should just be able to tell the game to let me handle the Recruit action so I can do whatever I deem necessary without having to adhere to the game's standard ruleset that requires people to have gold and at least one leader unit standing on a keep that's directly or indirectly connected to at least one vacant castle tile.
Author of the unofficial UtBS sequels Invasion from the Unknown and After the Storm (now available for Wesnoth 1.14.x and 1.15.4+).
Top

I should have checked the commit log for more details before posting here, but thank you for taking the time in explaining it. It was very informative.
Top
Post Reply
607 posts