Anonymissimus wrote:The turn limit on "Lost" is pretty graceful I think, even on hard. The enemy generators are set up to slowly reduce their pace, that is, the more turns have passed, the less frequently they appear, perhaps that's not obvious.

That I did not know.
Top

Hi, I've been playing this campaign and just wanted to report a bug I came across. It's in scenario 4 "Up the Mountain". I'm playing on 1.10.6, on easy. Please refer to attached screenshot. Btw- this is a cool campaign so far. 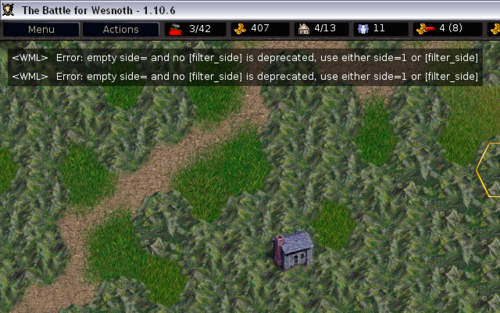 Do you have a replay and/or save from shortly before for this ?

EDIT
Perhaps you get that since you play on 1.10.x while the campaign defaults to 1.11.x (it's the same campaign version for both stable and development).
projects (BfW 1.12):
A Simple Campaign: campaign draft for wml starters • Plan Your Advancements: mp mod
The Earth's Gut: sp campaign • Settlers of Wesnoth: mp scenario • Wesnoth Lua Pack: lua tags and utils
updated to 1.8 and handed over: A Gryphon's Tale: sp campaign
Top

Anonymissimus wrote:EDIT
Perhaps you get that since you play on 1.10.x while the campaign defaults to 1.11.x (it's the same campaign version for both stable and development).

Yes, perhaps. It didn't seem to affect anything and I've completed the scenario alright. I guess it's no big deal... no harm, no foul. Thanks for your quick reply.
SP Campaign: Rally For Roanic
Top

scenario: Towards the west gate
message appears at top of play area:
<Invalid WML found> the key 'protect_location' is deprecated and support will be removed in version 1.13.0 (2)

scenario: The great gates
message appears
<Invalid WML found> The key 'target' is deprecated and support will be removed in version 1.13.0

Perhaps this is more relevant to "The Earth's Gut for BfW 1.12" when that is released.
Btw i no longer see messages in .xsession-errors when the game runs, do they get logged somewhere else now?
Top

Please ignore these particular deprecation warnings for now. (I hope that a tool that auto-converts the old syntax will be written so it's left unchanged until that.)
The list of tags for which warnings should be ignored is here
http://wiki.wesnoth.org/AiWML#Deprecate ... ng_Aspects

tr0ll wrote: Btw i no longer see messages in .xsession-errors when the game runs, do they get logged somewhere else now?

Is this a Mac thing ? I watch them in the terminal I started wesnoth from (Linux) or in stderr.txt (windows). No changes AFAIK.
projects (BfW 1.12):
A Simple Campaign: campaign draft for wml starters • Plan Your Advancements: mp mod
The Earth's Gut: sp campaign • Settlers of Wesnoth: mp scenario • Wesnoth Lua Pack: lua tags and utils
updated to 1.8 and handed over: A Gryphon's Tale: sp campaign
Top

tr0ll wrote: Btw i no longer see messages in .xsession-errors when the game runs, do they get logged somewhere else now?

Is this a Mac thing ? I watch them in the terminal I started wesnoth from (Linux) or in stderr.txt (windows). No changes AFAIK.

I'm not sure if this is a bug, but it seems to be... when I finish "under pressure", Hamel gets knocked all the way back to level one and zero experience. There's no dialog or anything to indicate this should happen, he's just ... suddenly a novice again.
Top

Sure this is a bug. I am guessing wildly that it is caused by a certain engine bug which should be fixed in the latest BfW version (Wesnoth 1.11.17 (1.12 Release Candidate 1))
projects (BfW 1.12):
A Simple Campaign: campaign draft for wml starters • Plan Your Advancements: mp mod
The Earth's Gut: sp campaign • Settlers of Wesnoth: mp scenario • Wesnoth Lua Pack: lua tags and utils
updated to 1.8 and handed over: A Gryphon's Tale: sp campaign
Top

Just finished this campaign. Really enjoyed it. Here are my notes:

* It's not finished. I completed the final battle, was all ready to see how the troops I'd sent underground would fare in their dungeon crawl challenge and I got a "To be continued..." dialog and the credits screen.

* You did an excellent job linking the quests with events in with the mainline campaigns. I'd love to see more campaigns take this approach.

* Scenario: Breakthrough - I never got the ring of regeneration from the Serpent because I killed both of the leaders and the scenario immediately ended. It's pretty tough to get the Serpent to leave the water, so the player can miss out on a valuable treasure because the AI decides to shaft him.

* Scenario: Up the Mountain. The bandits charged me 114 gold. This seemed to be a particularly random amount. I'm guessing it was a percentage, but it just sounded bizarrely specific in the circumstances.

* Scenario: Unknown Tunnels: This is a hard enough scenario as it is and it does not need a time limit. I'm not a big fan of crossfire scenarios where the party has to cross a battlefield between A and B - they usually end up beating me up instead of one another and there are too many random factors which can screw with the player regardless of the skill level. I completed it by bearing south, wiping out both sets of trolls and then heading North. Thankfully the trolls had done the hard work by then and wiped out the undead, otherwise I'd've been screwed.

* Scenario: The Great Gates: My ally wasn't particularly keen on heading into the caves, even when he clearly had the advantage, but other than that I enjoyed this one.

* The Bridge is Broken: More dungeon crawling fun. Enjoyed this one.

* Scenario: Lost in the Dark. when Dulatus fell in the earthquake, he had a buddy who fell with him. His mate presumably died, but it might be cool to be able to find his body in the water - preferably with some kind of treasure (Maybe a whetstone that Dulatos uses to sharpen his spear for +1 Damage) I struggled to rescue the troll in this scenario and Berseker vs Bats is not a good match-up due to the presence of Drain (One wonders how he ever survived) Consider replacing the bats with rats instead.

* Scenario: Unusual Allies. The undead leader had drain, which meant you needed magic to face him - and my ally seemed to rubbish at sending shaman units against him. It might be wise to replace him with an undead leader unit that does not have drain. (In fact, on several occasions during the entire my ally did not do what I wanted - he always seemed shy when it came to killing bosses, for instance)

* Under Pressure: Kudos to spelling out to the player that this is a meat grinder of a mission and it is designed to wear down your resources. This is far less frustrating than going into the mission cold and discovering that it's a resource killer.

* Ferry Crossing - I left a Wose Sapling on the south bank and had him snag all the villages, only to find out that he should have joined my navy and make his way to the North bank. (I debugged him away; it felt in keeping with the spirit of the scenario) Consider making the scenario end as soon as Hamel and his mage pal reach the North bank, rather than requiring *all* units to cross the river safely.

* The Investigation - You need to spell out to the player that the forge will supply ample magic to open the other gate. It's not clear at all. I wasted a lot of time trying other options. Also keep the bats at Level 0 on the easy level. This scenario should be a respite and a change of pace, more associated with dungeon exploration than a war of attrition. The room names seem a little out there too. I'd recommend "Fungal Fields", "Storeroom", "Forge", "Banquet Hall" and "Herbal Garden"

* Prison - Took me three tries to get this one right. I eventually got to the big bad before turn 40 only to discover he accelerated his plans when I opened the door. (If I'd known that I'd've reseted outside for a turn or two) I'd've liked a benefit for reaching him before he started executing the prisoners. Perhaps the executioner could moan that he couldn't find his axe?

Beating my way through the ramparts against a time limit was far too hard. I could only kill one L3 Dwarf a turn and an L3 undead would then step up and take it's place so I struggled to make any ground. Perhaps the ramparts are too small and only Dwarves can fit on them. Also I couldn't block the doors and stand in the way of the executioner. And finally, having defeated the boss, the executioner carried on killing the prisoners! Furthermore, if you stand on the altar in front of him you lose your unit when the animation kicks in! You might need to change the altar to a pit instead.

* Capital Letters: I'd recommendation using capital letters in your scenario titles. For example "The prison" should be "The Prison" - This isn't standard English but it looks a little better on the eye.

* I must add that I did really enjoy the campaign and would recommend it.
Top

The campaign is amazing. But it is not finished. Is the development still going on?