New version up (still listed as 1.6) with the next stage of the dwarf quest available.
I'm considering letting you get help - a team of dwarves - for this one. Thoughts?
Top

Having fun with this. A couple of comments:

Trying out the caverns. I was expecting quick death when I first started seeing all of the undead, but they don't seem to attack unless you are already hurting. This is good! I like the idea of maybe having a small band of dwarfs to help clear the caverns. Haven't found the previous messenger yet, I'm assuming he is out there somewhere.

One bug that I found was when I chose the path of the RuneWarrior (I think that is what it is, don't have it with me right now.) Brent became unable to move anywhere except in forest and his defense is 0% while in the forest. Makes it difficult to progress when I can't leave the trees!

Other than that, I'm liking it.
Top

Definetly, i like it as much as i love RPG's, but then i found that the story is quite lacking of ermm... story!

My guess is that you are developing the gameplay, but is quite shocking to have a story; well you go hunting and mother gets you... my idea to implement this is to make that part the tutorial for the player to know best the gameplay and all that stuff with some of the mother's explanations about leveling, the world map, the maps where action takes place, how to dialog, quests and (if you plan it[as i guessed with the merchant in one town) the merchants.

Maybe you would like to create random encounters in the map(as bad moon rising does) or well whatever.
I find the add-on promising

I finished clearing out the cavaren of undead. I was using a Dark Ranger and that was probably the only reason (i can think of) that I was able to do it. Because he had Nightstalk. Without that I would not have been able to do it. Using that I was able to hide in order to heal and then attack when i was at full strength killing one at a time. I haven't tried it with anyone else yet but I think a small group of dwarves would be appreciated. Also the quest is not completable.

I also encountered the problem with Runeblades. After you make him, his resistances are 0 and MP is set at "--" which allows you to move on whatever terrain you were on when you made him but no where else. I have pictures if you want to see them.

Playing as Brynne, once I leveled up to Rune blade, HP were not recovered and impossible to move anymore...
-WAR- Wesnoth Allied Rebels
Top

Thanks for your interest, your bug reports, and your suggestions! I actually was already planning on having some random encounters eventually (though I hadn't written it on my "Future Plans" list...) but now I actually have someone pushing for it, which helps. I think that developing the first scenario into a tutorial would be a great idea. Or at least having a tutorial mode. Perhaps as a separate difficulty level. Hmm....

In terms of story: I agree that more story would be nice. Any volunteers to work on it? I have ideas, of course, but I'm trying to simultaneously put them into play and also get the game mechanics working. And do a bunch of art. Sorry that I can't work faster!

I fixed a whole mess of stuff in this version. Hope you enjoy it!

First off, whenever i try to move into a different map with a second job or greater (loaded from previous version) unit I get an unknown unit type making it impossible to go anywhere.

Second, the Dark Ranger is completely invisible (not on the map, just shows the health,xp bars etc.) Shown in picture.

Third you are not able to accept the kill fire beasts quest (at least with the first job. If you accept the fire elemental's proposal than you are not able to kill either side, plus the fire leader doesnt say anything yet. I have not tried it with a second job character (not loaded from previous version) since i went mage and i cant get there from the forest north exit because i keep getting pwned by wolves (which i cant get around without forest movement). I think there should be some way to avoid or prevent this.

Havent been able to test out as much as I would like right now, probably will have more for later.
One thing that would be nice is if you could save how much of the map you have explored from previous times you have been on that map so that you can just say to go to one exit to the other, without having to keep saying where to go. You could leave fog of war on. 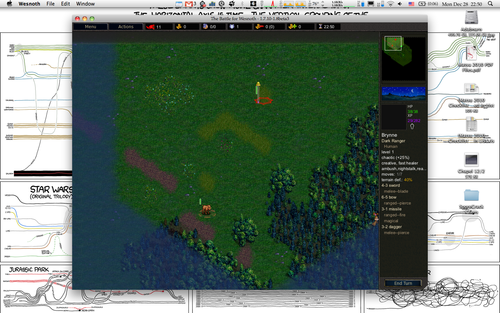 @Valyn: You'll probably have a lot of problems if you use an old save... I don't know if this is the cause of all of your problems, but I do know that I have no problems going to new maps with lvl 1 units like the dark ranger, and the dark ranger is displaying on my computer.

I haven't been able to check the fire elemental issue yet.
I'll add some basic stat increase AMLAs that will be available at every level. One will be speed, which will allow you to increase movement and thus avoid wolves better. If you get Pia, though, you should be able to kill wolves if you use caution.

I've wanted to store the shroud since I started working on Brent, but it's straight-out impossible with WML. However, I think it may be possible with Lua... I'll look into it. Thanks for prodding me! And thanks for testing.
Top

why do some of the forest units have dummy ability in their attack names? (bobcat, for one)
Also, I went to the dwarf king and he said i should go to the caverns, find the previous messenger and then clear it out, but then i didn't get a quest and the caverns seemed empty when i got there. i use version 1.6.5 on ubuntu 9.10
Top

The version of Brent on the 1.6.5 server is incomplete and I have stopped developing it. I guess I'll remove it. wesfreak: if you're using ubuntu 9.10, just download 1.7.10.
Top

I haven't played much, I just tried to launch it (as "Brent"). Here are some issues I noticed: There are some other issues, but they are strange enough that I have to check first if they are not some engine bugs.
EDIT: These other issues are caused by your usage of '_ ""' in the files (especially for description attributes). With Gettext (the tool responsible for handling internationalization in Wesnoth), translating an empty string does not return an empty string but a wall of text describing the status of the translation. (For instance, it contains the email addresses of the translators.) So the engine didn't expect to encounter some WML code that was querying this string and it was confused to no end. I have fixed the engine so that an empty string is an empty string, whether it is translated or not (for 1.7.12). Still, you may want to fix the issue on your side too (that is, removing the translation mark). Indeed, while it will no longer confuse Wesnoth, it will still confuse Gettext, possibly preventing translators from working on your campaign.
Top

I've been a fan of Brent for a while now, and couldn't resist adding something to this thread.

If anyone here has played any of the games by Spiderweb Software, then they'll know that in their games there's this statistic called 'leadership' in the Geneforge series (my favorite RPG games ever). The higher level your leadership is, the better conversation options are available to you. For instance, you could convince a shopkeeper to sell his goods to you for a lower price if your leadership is a certain level, or convince a soldier to join up with you if you had a high enough leadership level. I was wondering if you might consider putting something like this in Brent. Of course I know this is something that you'd only want to try after you'd gotten the 'skeleton' of the campaign finished, but it might be fun to try it. and it shouldn't be that difficult to code.

Anyway, that's my two cents. Take it for what it's worth (if anything

).
"I'm never wrong. One time I thought I was wrong, but I was mistaken."
Top

@silene: Thanks - I'll try to track them down.
@artisticdude: Though the coding framework isn't necessarily hard, the implementation would be. It would complicate a number of possible dialogues... though I guess I can limit that number... I will keep it in mind. It's a nifty idea. Thanks!
Top

This project has a nice point, giving the RPG style for Wesnoth is just perfect

Test: I played as Brent. // I could not find the 'Water spirits'... Brent said 'This is a human town, they wen't be here', so I went to the elvish area and nothing happened. Is that quest working? // No further errors or bugs.
Top