The Ooze returns! I have upconverted the campaign and uploaded it to development add-on server.
Top

I just downloaded and played through the first scenario -- very nice.

One thing was that there was a dialog box saying something to the effect that the bats would not produce spawned oozes upon death. However, the bats did in fact spawn oozes when I played through. So that may be a bug of sorts to look into.
Top

One thing was that there was a dialog box saying something to the effect that the bats would not produce spawned oozes upon death. However, the bats did in fact spawn oozes when I played through. So that may be a bug of sorts to look into.

Yes, that's already been removed in the version CIB and I are working on now. Bats used to be Undead and thus were immune to plague. Now that they're not Undead, they can be digested. The tradeoff is that the new bats are more frustrating with traits and 60% dodge.
Aethaeryn (User Page)
Wiki Moderator (wiki)
Latin Translator [wiki=Latin Translation](wiki)[/wiki]
Maintainer of Thunderstone Era (wiki) and Aethaeryn's Maps [wiki=Aethaeryn's Maps](wiki)[/wiki]
Top

FWIW, I think the spawning bats make it easier (even with the 60% def) in that by the time I attacked the bat section I had a gazillion ooze army which swarmed the no-zoc lvl 0 bats. Simply made more oozes in the end (this was on Hard Lvl). Maybe lvl 0 WC would work as a substitute to the bats, perhaps 1.5 or 2 generated per turn. The slowness of the WC (relative to bats) might also put some more pressure on the oozes in the center in that when I played the bats flew quickly to the peasants allowing the oozes to take their time on the thieves/goblins/spiders. Once the ball got rolling on the spawning it was easy to shelter wounded oozes -- undead units might help reign in that rapid growth. Just some thoughts...
Top

v1.2.0 for 1.3.13
Made a few modifications. Thanks to megane, spider hatchlings have now (sweet!) baby spider images and Oozes are team-coloured.

There is now a multiplayer mode with Master Ooze 2, but so far only the first scenario is available.

In order to make it more difficult again, level ones are being recruited in scenario one after a certain time. This gives some pressure to kill leaders early(especially the goblins are dangerous). I didn't get to test much yet, so some feedback would be welcome.
Top

I've attached my attempt at teamcolouring the giant ooze.

?! That's a matter of taste, I guess. I really like them. But don't know, I tend to have an uncommon taste, so if more people don't like them, I can change them back.
Top

OK, so here are the images for comparison:

In my opinion the black ones look quite good, but in MP the contrast between the different Oozes is better expressed with the fully team-coloured ones. Another solution would be to create different slime-images for the different players(like black and white) and teamcolour only the eyes. 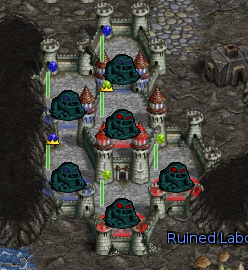 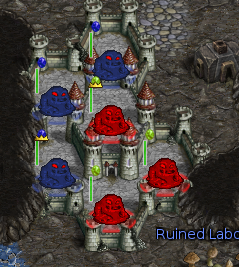 The first example is certainty more effective, if a little garish. The second example is almost too little color, but looks a bit better. I think a fully TC'ed unit is neat!

v1.2.1:
-fixed a bug with turn limits that made scenario 2 unplayable
-instead of teamcolouring oozes, give them a fixed colour

v1.2.2
-fixed a mistake of mine that caused Giant Oozes to produce more Giant Oozes instead of Oozes
-in MP, all oozes are coloured green now. their eyes are coloured red/teal.
-there is a file called OOZE_COLORS.txt now which contains the ooze slime and eye colors - modify them to your liking, but read the comments
Top

I love the ooze TC.

Just wanted to say that I just played the campaign through and thought it was brilliantly done.

I liked the campaign so much I'm writing a short story based upon it.

I've updated version 1.2.5 to the stable Wesnoth server. Special thanks to mich for helping make that happen.

The changes in the new version:

*Fixed a bug in the last scenario where the epilogue music wouldn't play.
*Fixed a bug in level 3 where Fontaine overpaid the Master Ooze.
*Players were entering level 4 with too much gold and the weapon upgrades were too expensive. To fix this the gold rewards system was revamped.

There were various minor corrections in dialogue throughout. Enjoy!
Top

Finished a playthrough on the DAY that mich uploaded it to 1.6, I really did want to play this for a while.

Well, anyway, is it on purpose for the Master Ooze Shaman to level up into the old sprites of Sorceress, Enchantress, ect instead of the mainline versions? This happened on 1.6.

Minor nitpick: the Master Ooze's base traits (Strong and Intelligent) are a pretty good way to differentiate him from the other Giant Oozes, but I think it would be nicer if he had Strong and Dextrous, because Intelligent doesn't do much when you're fighting level zero units and one AMLA doesn't help much. Or, alternatively, carrying over any EXP that the Master Ooze gets to the Shaman he controls would be pretty cool too, since any EXP that he gets on the first two scenarios are useless.