But then, why can't the Silver Mage "sneak" to the dead end on the right? 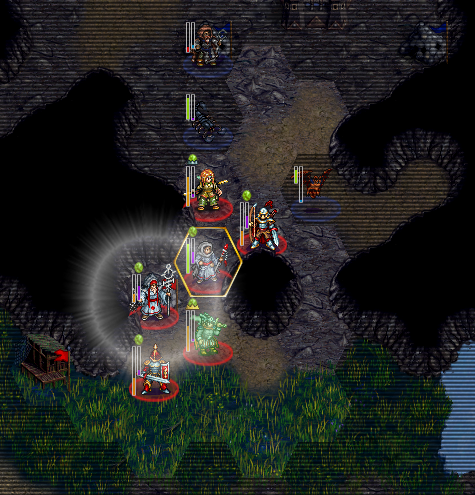 If I remember this correctly, Lady Jessene has a special ability (distract or so) that removes ZoC of adjacent enemy units.
I am a Saurian Skirmisher: I'm a real pest, especially at night.
Top

But the bat is not adjacent to her.
I named your units.
Top

Special Notes:
This unit is capable of distracting opponents, allowing allied units to trespass their Zones of Control and move unhindered around them.

Distract:
This unit negates enemy Zones of Control around itself for allied units (but not for itself).

I didn't know about her distract-ability. I am playing with German-Language-Settings and ingame it just says "Führungsqualitäte..." (leadership) so I thought she just has leadership and did not check the unit-description.

The ellipsis at the end of that indicates that something was cut off. (Leadership is normally listed as the not-cut-off "Führungsqualitäten", right?) Put your mouse over "Führungsqualitäte..." and see what the tooltip says. (You should see the tooltip for both leadership and distract. The dots are your clue that there is something to check here.)
Top
Post Reply
6 posts • Page 1 of 1