This is what I got when I tried to download the mobileprovision on my computer. 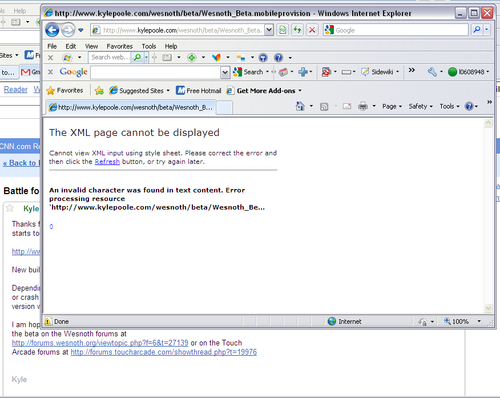 I think it's ok to post this cuz it'll only work on the register devices correct?
Top

Oh... should I have gotten an email if I was accepted?
Top

Try right-clicking on the link and choose save-as....

Wolsel, the mobileprovision file might change with each beta release, if new devices are added.

Kerth, all beta users should have received an email, what's the first part of your email address before the @?
Top

If I saw this, am I most likely good?

EDIT: I've found the problem. I forgot the e at the end of poole. I guess I'm out of beta, then?
Top

I was able to start the game on my iPhone 3G. I restarted the phone to free some memory first. In overall the game looks very nice and promising!! Great job. The speed is sometimes slow but actually in my opinion is acceptable.
However, the game crashes whenever I create multiplayer online-game. Wesnoth connects to the server, then I click "Create game" and it crashes, game closes and I go back to the iphone menu. I tried this several times, both on Wifi and 3G. No luck.
Anyway, after the first test, in principle everything looks and behaves nice, I was able to play duel with myself on 2-players map with no problems

Guh, I'm stupid. I have no idea how to install this thing. I got it to the iPhone Configuration thing, added the mobileprovision to library and then... Not sure if I did this step right.

I imported the wesnoth_beta_somerandomdate => payload => wesnoth.app and I'm not sure if that's what I was supposed to do. It wouldn't accept any other file. But when I click install it tells me error and doesn't install it.

So apparently I'm an idiot or something. I am now going to change into my beggar's rags, get out onto the street, and plead piteously for help.
UtBS revision spriting.
To The Zeromobile!
Top

Wow, I have no idea what you are trying to do!

1. Drag the .mobileprovision file to iTunes. (it will not give any feedback that it was loaded, but when you sync it will show up on your device in Settings->General->Profile)
2. Double click the .ipa file, it should load up and show it processing in iTunes
3. Sync your device through iTunes (takes like 10 minutes for 200mb)
Top

Woaw ! I was really well-surprised...
The beta is really good. Performances of game are really good (but loadings are really slow).

What a good job.

I will mail for a more precise feedback.

Ok, I had an issue with downloading the mobileprovision file and stuff. Installing onto my iPhone failed because it said I was not a valid user, even though I checked my id in the provision file. Well, I deleted everything, tried it again, exactly as documented and it worked.

Exited and started again and had 34.15 Mb free. Each restart of the game changes how much memory I have available, but I tend to have anywhere from 30-50 Mb free.

pinching doesn't zoom in/out, is that a feature to come later? I would really like to see that since most moves don't even show on the screen and you have to scroll around. I think the default size is quite large and a smaller scale would be quite playable (for me anyway).

got to recruiting part and game crashed

when starting or loading, it ought to say Loading somewhere. ?? It took several moments for there to even be a status bar showing progress so I wasn't sure it was doing anything at all. Generally, loading is painfully slow.

text is pretty small and menus hard to precisely hit with large fingers.

I can tolerate the crashes, it being beta and all, but it does get old quick when it crashes so often AND the loading time is so slow. I play a few turns and wait through the crashes, redo the moves that were lost, and give up after a final crash. One crash actually reset my phone! Woohooo!

This brings me to a feature that I'd like to see, automatic saving of real time progress. I wouldn't see this as duplicating the autosave feature that it does after each turn. It may require a lot of work too, not being a core feature, but most mobile phone games keep track of exactly where you are in the game and allow you to return there in the event of a phone call, game crash, or you simply exiting when your boss walks in on you.

It could overwrite the same save file or something, or use some sort of incremental save to be faster. And when you restart the game, it could prompt to restart from this spot or go to the menu. Interruptions are unavoidable and a mobile device should handle those without losing progress you made in that turn.

Inital play looks like it drains battery pretty fast. I'm not sure how much control you have over that when you simply have a game that does a lot of processing, but anything you could do to extend battery life would be great. Or tips or options that would help, i.e. would turning off background music help? I don't know, but i'll try it.

Other than that, I haven't really seen anything I would say is a bug. When it doesn't crash, the game seems to do what it should. Can't wait to see the crash-free version. Any clue what causes the crashes?
Top

There are two threads right now, talking about the same subject. Solutions:
-Move the beta-discussion to the other thread, keep this for signups
-Merge the threads
Wesnoth UMC Dev
Stories of Tarlyn (on hold) - Era of Strife - The Dark Hordes
Top

AI wrote:There are two threads right now, talking about the same subject. Solutions:
-Move the beta-discussion to the other thread, keep this for signups
-Merge the threads

Option A seems best; one thread for signup discussion, the other for beta discussion.
"Pure logic is the ruin of the spirit." - Antoine de Saint-Exupéry
Top

Are the signups still on? I can't believe I missed this

I've just emailed my UDID. I've done testing on a few other iPhone apps in the past and I'd love to offer what little I can to help out Wesnoth