I see the wolf, but I believe he is talking about the small figurine on the far right. And I don't believe that is Megatron. (Ahh.. Transformers, a good show, until the new versions ruined it)
I am Oreb, Lord of the Darthien
Give your comments to the World of Orbivm
Top

The earth shakes, and the doors to the Hall of Eternal Champions begin to open....

A new Champion is about to arrive.

Last edited by Doc Paterson on January 30th, 2007, 10:59 pm, edited 1 time in total.
I will not tell you my corner / where threads don't get locked because of mostly no reason /
because I don't want your hostile disease / to spread all over the world.
I prefer that corner to remain hidden /
without your noses. -Nosebane, Sorcerer Supreme
Top

Supremely victorious in the galaxy-spanning battle known as the Tournament of Champions, Soliton's likeness takes its place amoung the greatest champions of all existence. 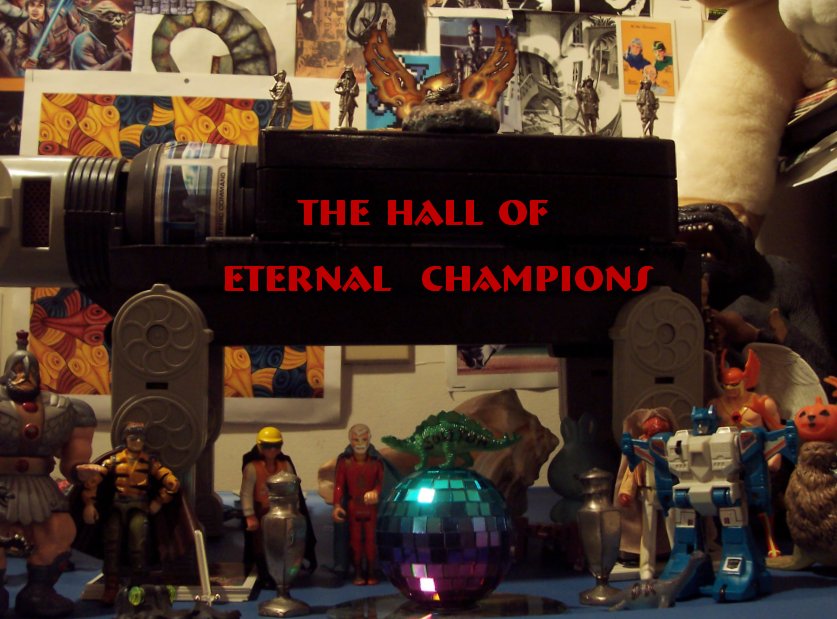 More photographs from the Hall of Eternal Champions: 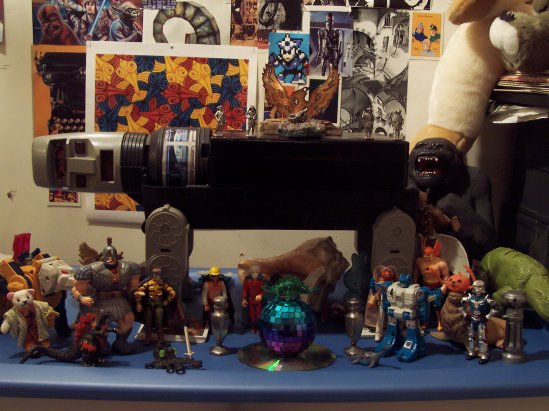 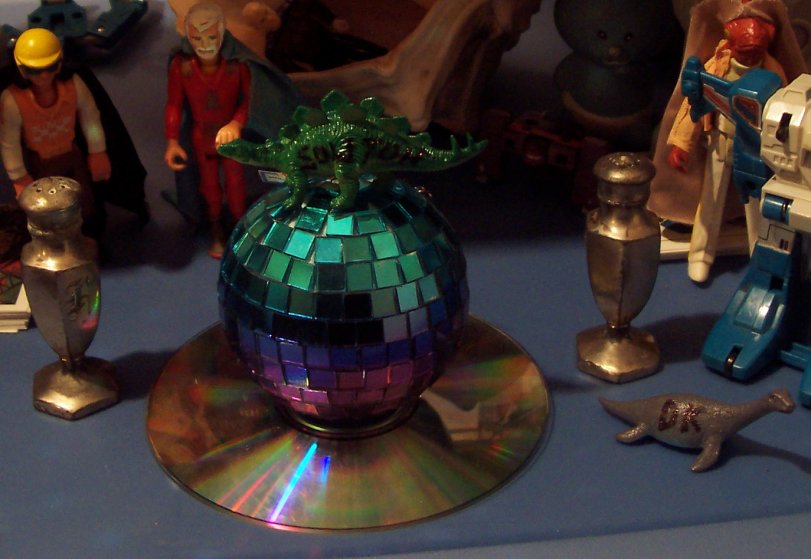 Wow I totally have that white and blue robot(from when I was a kid). I don't know where it is now though.
Sorry for the meaningless post
Top

I saw Bruce Lee, king of Karatee. (It had to rhyme.)
I'm what's left of Bluecrash!
Top

After a long series of battles known as the Tournament of Champions 3, the Champions of the Hall of Eternal Champions awaited their next comrade.

Important matters of Championism were debated.

The Champions knew that their next comrade would be either one known as "Ereksos," or another, well-known from previous Tournaments, known as Becephalus.

They waited. Some passed the time by matching wits or weapons with other Champions (this was nothing new, and was one of the more common activities of The Hall.). Others strained their eyes to catch a glimpse of the Champion that would, undoubtedly, soon begin the Long Walk of Honor into their presence.

A strange sound was heard. The room filled with mist and the walls seemed to bend. A blurred figure formed in the center of the Hall.

It was the one known as Ereksos! He had not walked into the Hall, as had all previous Champions, but had, by some mysterious force, been teleported onto the Discoball Dais of Supremacy. For a few brief moments, there was silence. Then there was a murmuring of voices from the gathering of Champions. Would they accept this strange new Champion into their presence? They looked upon him and could see that he was a strong ("And clever!" said Muggomambo, The Telepathic Pumpkin Prince.) Champion.

They gazed upon his thick armored hide, which was lined with sharp, protruding spines. "He must surely be a great defender...." they thought. The murmuring grew louder. Many champions began to cheer, while others stomped their feet, clicked their claws, fired lasers into the air or raised swords, pitchforks and flippers towards the heavens.

Hooray for the new member of the Hall of Eternal Champions! He will sip apple juice with the greatest heroes and villains of all time, now and forevermore.

But what, wondered many, became of the Hero known as Becephalus?

Perhaps they would never know.
I will not tell you my corner / where threads don't get locked because of mostly no reason /
because I don't want your hostile disease / to spread all over the world.
I prefer that corner to remain hidden /
without your noses. -Nosebane, Sorcerer Supreme
Top

The Hall of Eternal Champions would like to apologize for the delay. Shortly after the events of the Tournament of Champions 3, a great war broke out between the Immortals of the Hall and the Elder Gods of Cheshire-Estate (Cheshire-Estate being the dimension in which The Hall resides.). Though they were immortal, the Champions were no match for the Elder Gods, who sealed them inside of a great "storage container," and exiled them to the dark depths of the Underworld. Fortunately, the immortal known as Schmee-Lion had very powerful HAX, and was able to contact a Younger God, who, in turn, used his diplomacy to arrange a compromise with the Elder Gods. The immortals would be released and allowed to rebuild the Hall of Eternal Champions, albeit in a new location that did not interfere with the Grand Design of the Elder Gods. The immortal known as Ereksos was then charged with organizing the reconstruction, and suffice it to say, this took a very very very long time. At long last though, the Hall was reborn, and the Immortals were again able to bask in the glow of their own grandeur. They vowed to continue their search for powerful additions to the Hall, to expand their number in hopes that one day, they would become even more powerful than the Elder Gods.

Once again, the galaxy's greatest warriors have met in battle, and once again, a Champion has emerged!

(Besting all- and posing victoriously on top of the broken bodies of his rivals....)

Supremely victorious, Wintermute takes his place among the greatest Champions of all existence.

He ascended the Discoball Dias of Supremacy, and was bestowed the Mantle of Immortality.

A great cheer rose up from the crowd of assembled Immortals-

A toast to your victory, with the finest wine from Mokena!

Sorry Wintermute, I've poisoned your wine. It was for the good of the Kingdom!
My MP campaigns
Gobowars
The Altaz Mariners - with Bob the Mighty
Top

Congradulations Wintermute!
Join the N3T clan! (a clan opposed to the evils of games with 3 teams)

/me devours all who toast to him.

/me keels over from poisoned wine.
"I just started playing this game a few days ago, and I already see some balance issues."
Top
Post Reply
28 posts