Feedback for the mainline campaign Son of the Black Eye.

5. Splitting my forces to kill each leader without casualties was interesting.

6. 6. The defense part is fine, the leader hunting bit is a tad annoying.

7. Maybe have the leaders more frontloaded on gold with less income, or have less gold but more elves starting at the center. This should make the defense part longer and the fighting through constant elves in forests shorter.

8. Had a few restarts where the forces I sent to certain corners weren't enough. Ended up finishing on a run with a few vets lost but 2 warlords, a slurbow, a knight, and level 3 gruu.
Top

Can't say I feel like the changes (you moved the keep right?) improved this scenario. Starting at dawn next to an elvish keep is just mean. Whereas you had choices before, now you have to power through. Either at daytime or wait til dusk until you break through the elves. Likely it got harder (hard to tell for me since I play on lower difficult this time), but for what price?

The weird move order leads to a special gamey mechanism usually absent in Wesnoth and known more in alternating turn settings. It is almost always better for green to attack non-blue, since blue has already moved this turn and can be handled by red.
I am a Saurian Skirmisher: I'm a real pest, especially at night.
Top

(1) What difficulty level and version of Wesnoth have you played the scenario on?
Difficult 1.12

(3) How clear did you find the scenario objectives?
Clear, but it wasn't until the third or fourth attempt that I figured out that the Slayer could recruit units.

(4) How clear and interesting did you find the dialog and storyline of the scenario?
Alright, I don't really play for the dialog or story

(5) What were your major challenges in meeting the objectives of the scenario?
The time limit mostly.

(7) What, if any, are changes you would have made to the scenario to make it more fun?
The scenario seems a bit brutal, compared to the previous scenarios especially. I understand that maybe I should lower the difficulty, but I'm stubborn and like the odds stacked against me. My main issue is that you can't really intuit what you need to do to win from the start, and it's hard to estimate the exact pace you need to march your forces to stay within the time limit. You need to try and fail several times to learn how do to it, which is very time consuming given the multiple turns and large number of units. It's easy to lose at turn 8 even if it seems like you're winning, then play for another hour only to run out of time moving through the SW forest.

I have several recommendations, that hopefully would increase clarity, fun and flow without making it strictly easier.

a - Increase the number of spaces for recruitment at the start or reduce the gold for the NE leader to allow you to actually reinforce the city and push from there. Increase the gold of other leaders to compensate. It feels lame having to march your shamans out of the city because there's no way to reach it before its overrun.

b - Buff shamans a bit - a bit more health and slow? Regeneration or heal? It feels lame having to move 3 units that are completely useless in combat because they can't attack without risking death the next turn. You should still need to babysit them, but it would feel better if you could actually use them to pick off weak units, hold a gap in a line for a single turn or debuff enemies.

d - Consider redoing the SW part of the map. It takes so long to cross the water and forest surrounding the keep, that even if you get to the bridge with 5 turns left and minimal enemy forces left you still might not be able to make it to the leader.

e - Maybe just increase the number of turns slightly, like +2 or +3. Or start during the day or at dusk so you can break the initial wave a bit faster.

(8) Was there any event that caused you to lose the game and forced you to reload or restart the scenario?
To be honest, I haven't beat it yet. Trying it again later today with a new tactic. But for a few attempts, I didn't realize your allies could recruit units. For some of them, the shamans died. I made two excellent attempts only to run out of time. Then I made another two attempts where I split my forces and rushed and took out two leaders but ran out of time for the SW leader. Ended up quitting in frustration.

All in all, I look forward to finally beating this. Scenario is great in concept but it feels like its very vulnerable to luck and it's easy to lose but not know it early into the game. I can't play elves anymore thanks to the hatred of them this map has induced in me

(1) What difficulty level and version of Wesnoth have you played the scenario on?
Nightmare, 1.12.6, 209 starting gold

(3) How clear did you find the scenario objectives?
Clear

(4) How clear and interesting did you find the dialog and storyline of the scenario?
Interesting to learn that the orcs actually have ancient lore being guarded by shamans. I like the funny lines from Gruu.

(5) What were your major challenges in meeting the objectives of the scenario?
Everything. This scenario deserves the title of "nightmare" (6) How fun do you think the scenario is? (1-10)
I suppose it's 10 for me. After all I'm a guy who likes Dark Souls

(7) What, if any, are changes you would have made to the scenario to make it more fun?
I don't know what I would want to change.

(8) Was there any event that caused you to lose the game and forced you to reload or restart the scenario?
Oh yes. Just the event that I initially enter this scenario with not much gold meant I had to restart from the first scenario..
Bad luck with the initial siege and not successfully getting rid of all elves in the city quickly was the cause of some restarts. Mismanaging my units when they were already on the way to kill the last three leaders also caused restarts.

Here I am just enjoying the campaign so far and then this scenario comes along and slaps me in the face. I'm not sure I could have won this if I did not look at replays from this thread. Even having seen others win the scenario it still remains challenging. Anyway, I'm proud to say that I won this scenario without load-save and you should be proud too if you can win this.

(1) What difficulty level and version of Wesnoth have you played the scenario on?

- Very good, as we see elves being portrayed as the mercenaries for humans is a nice touch. Moreover, the introduction of Jetto is pretty amusing and welcome

- Making sure no important unit of mine gets killed

Somehow dealing with the overhelming number of elves while having so few units and turns. 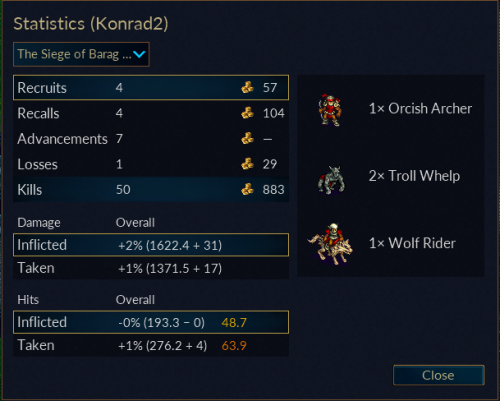 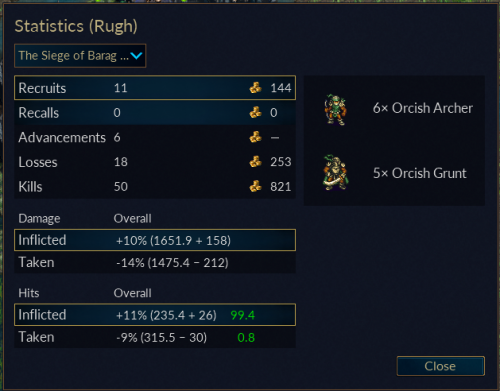 Return to “Son of the Black Eye”