Feedback for the mainline single-player campaign Legend of Wesmere.

Spoiler:
Meeting saurians on plain ice instead of forest ice is better.
You don't need defense protection since the AI spams soothsayers and oracles which will hit with 70% anyway but they cannot enter forest tiles so your devastating melee attacks are highly accurate. Even if you meet a skirmisher, the retaliatation you are giving is tremendous. Also patience really pays off, it took me just a morning and an afternoon on the ice to wipe 90% of the army. It is still a tough senario though.
(3) Objectives? Clear.
(4) Dialog? No problems.
(5) Challenges? Beating the clock.
(6) Fun? (1-10) 2, I hated it.
(7) Changes? None.
(8) Restarts? What do you think with 220 gold. I cheated once (lost 5 hits, needed just one) to take the southern enemy leader quickly when an opportunity presented itself so he cannot recruit more units.
Top

(1) What difficulty levels and what version of Wesnoth have you played the scenario on?
Hard, 1.12.5.

(3) How clear did you find the scenario objectives?
We could really use some more explicit indication about how to destroy villages, and which units will or will not destroy them (maybe add some explanatory text after the first dialogue dealing with the eggs and young).

(4) How clear and interesting did you find the dialog and storyline of the scenario?
That's the strongest point of this scenario. Landar's descent into darkness, Kalenz's doubts while sticking with his friend, and Cleodil's refusal to be part of such a mission - they're a major turning point in the campaign, and the scenario justifies them well. Moreover, Landar's line should you let him die is marvelous, and makes so much sense in retrospect.

(5) What were your major challenges in meeting the objectives of the scenario?
The obvious: no healing, little gold against many saurians, keeping my vital units alive. But a special mention has to go to the turn limit. It's very tight in my opinion, especially given that you have to destroy every single village on the map.

(6) How fun do you think the scenario is? (1-10)
3? It's very punishing, sometimes frustratingly hard. It also makes me mad at Landar (although that's part of the point).

(7) What, if any, are changes you would have made to the scenario to make it more fun?
Don't be afraid to add more turns. It's always frustrating to lose to time, but especially here. Why? The turn limit is generally used to force players to take risks and be agressive. But in this case, it's redundant, because with no healing and constant enemy recruitment, time's already playing against you. Alternatively, keep the turn limit as is, but make it so the enemy doesn't recruit after the initial massive attack. Surviving the initial onslaught is the most challenging and rewarding part of the scenario, but surviving it with units in bad shape that get gradually mopped up by the 2 saurians recruited each turn? That's demoralizing.

(8) Was there any event that caused you to lose the game and forced you to reload or restart the scenario?
Losing Kalenz and/or Landar. To be honest, I won by debug (kinda tired and impatient, I felt like I'd done the best I could and was already pretty proud of having wiped out the big saurian wave, so I didn't want to restart and lose again). It's a scenario where critical units are very vulnerable, since you're up against enemies that outnumber you, can skirmish and/or have access to magic.
I made my stand in the forest in the south, reasoning that I could thin out the southern saurian lines before the northern reinforcements arrived (it was half true). I met some success focusing on cutting down the mages and healthy units, and letting wounded enemy units kill off themselves in suicide attacks. I survived the assault, but came out too late, too few and with too few hitpoints to finish the scenario. it might have gone differently if I'd thought about the strategy Poison mentions, so maybe I just need to git gud. But that strategy is counterintuitive: honestly, when I'm outnumbered and have no healing, going to fight in the snow? Not my first option.
Top

(1) What difficulty level and version of Wesnoth have you played the scenario on?
1.14.5
Solider (Easy)
Starting Gold 966
(2) How difficult did you find the scenario? (1-10)
7. Despite lots of gold it has unique challenges.
(3) How clear did you find the scenario objectives?
Clear, yet unusual.
(4) How clear and interesting did you find the dialogue and storyline of the scenario?
Very good. A fine foreshadowing of the strife to come.
However as Maiklas3000 pointed out, Kalenz is unable to recall units of the Shaman line in any scenario, it may be pedantic but "Kalenz is not able to recruit or recall shamans or any of their advancements in this scenario." seems misleading.
(5) What were your major challenges in meeting the objectives of the scenario?
Inability to heal and the Saurians skirmishing ability.
(6) How fun do you think the scenario is? (1-10)
7+. Original and challenging.
(7) What, if any, are the changes you would have made to the scenario to make it more fun?
Make the Saurians more cautious. If they focused on protecting their villages it would force the player to take the initiative in accordance with the story. Maybe shrink the map or make the northern enemy easier to reach.
(8) Was there any event that caused you to lose the game and forced you to reload or restart the scenario?
At first I was over ambitious and lost key units.
(9) If you know a bit of the Wesnoth Markup Language - do you think that the WML of this scenario is clear and well commented? If not which part would you like to be documented better?
N/a

7, having no healing is harsh.

It made pretty clear that Elves are not necessarily nice.

Defeating the saurians before my units run out of health.

3, but I think this was designed to be punishing instead of fun. 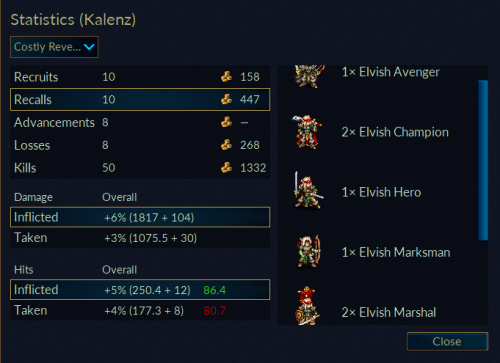 Good enough but only by fluke did I discover that not just Kalenz but one of his companions (the one who asked "are we to stoop that low" or something) too doesn't pillage villages. Another protested too, but he pillaged all the same.

At first I was like "oh another kill all enemy leaders" mission but man, was I wrong. No healing or healer units!

8. I loved this unexpected and original idea of a challenge. I focused on recruiting expendables units along with recalling just a Marshal and Captain to boost the lvl1s. No healing meant I made my loyal units attack ver so sparingly. Nights were scary, a lot of times I made many units not attack even fearing the Saurian's thrown spears removing precious HP, even retreated once or twice while taking the battle back to them. But yes, I prevailed. Losses being just all those expendables lvl1 units but few of them even got to lvl2. Any form of advancement was great due to the free healing. Kalenz and that one guy could heal from houses I noted, used that a little before burning everything to the ground.

Just maybe make it clear who pillages and who doesn't.

I did once the first time due to bad planning. I was so close to winning but ran out of turns. Also lost many veterans there. Didn't mind redoing once I got my pace and understood the seriousness of having no healing. Then went with the expendables/meat-shield plan.

9 in comparison with the rest of the campaign. Probably easier with better preparation.

The recall list meddling (no Cleodil troops) is rather unfair if not knowing beforehand. Its also (I think) improperly explained - Kalenz never was able to recruit Shamans anyway.
The village mechanics are not properly explained - I still dont understand why villages sometimes survive and sometimes not.

No healing other than 2/turn if not doing anything.

See above points - this is rather mean if coming unprepared.