Feedback for the mainline campaign The South Guard.

1. hard 1.1.1
2. 10, until I figured out a plan... then it became 1
3. pretty clear, very annoying
4. dialog was lacking I expected the marshal and my druid to talk, story was okay
5. uhh... winning properly proved difficult.
6. 9 when I was killing endless amounts of elves, 1 when I figured out how to actually win.
7. Wow, where to begin.
It started out interesting. Prevent the pillage of the city and towns.
From there it was all down hill.
I have to get my druid to a spot in the forest behind enemy lines...
If I kill any enemies, more spawn, pretty much DIRECTLY blocking the path to the parlay point after a SINGLE move on their part. That was frustrating as all hell because I could never kill anything.
If I killed a unit, more would spawn and block the parlay point. I had to kill them to move forward... thus spawning more and more.
I got frustrated and ending up just fighting to the death. I killed that marshal incredibly easily... which was odd because the story required him to talk to my druid.
My druid actually died... and I won for it! If she dies at any time, the player wins. What a terrible way to 'win'.

So what did a real 'win' of getting the druid to the parlay marker require? Me recalling my troops and using them as *expleted* punching bags.

They lured the enemy away from the parlay point and since I couldn't risk killing ANY elves, I had them sit there as the elves slaughtered them... yea that's a fun way to end the campaign, make my veterans stand there like punching bags and get systematically annihilated while my druid makes an end run for the parlay zone.

So what to change?
Elf marshal should not advance, he should be camped way in the back. Otherwise he gets killed very easy which ruins the story.
The elves can spawn infinite units... but for the luv of God make them spawn in an area that will NOT BLOCK THE PARLAY POINT AFTER THEY MAKE A SINGLE TURN'S MOVE!!!

I cannot stress that enough.

And what's with the billion towns all over the place, especially west and south of where the player starts? It's fine to make a few villages to keep a sort of 'realistic' feel for the map... but there's just so damn MANY.

Also, more dialogue between the marshal and my elf druid would be nice.

I made a real quick sketch of what I think would seriously improve the end of this campaign.

Map Legend:
A is the new location of the Elf Marshal, he should not move from this point. If the player is stupid and attacks him, spawn a dozen Elf Champions around him, like how in Ford of Abez a ton of Royal Guards spawn to protect the Princess. Make the only way to kill him is by cheating.

B would be the new parlay zone.

C and D represent guards so the player can't blitz to the parlay zone, he has to fight his way there at least a little.

omfgwtfbbqgg is the mass spawn zone, well AWAY from the parlay zone. I liked killing endless elves, that was really fun.


The point of this scenario should be to hold the elves off long enough for your druid to reach the parlay point with her escorts... a few units you send to make sure she gets past the guardians.
This allows the player to engage in a glorious final (if endless) battle, putting his hard earned veteran and elite units in a position where they are able to kill swarms of elves for fun.

While this gigantic(ly entertaining) battle is taking place, the real objective is to get the druid to stop the battle. This at least gives the player the option to fight back...
As the scenario is now... all my veterans did was sit there and get smacked around. What depressing waste... And I thought losing the trapped dragoon was bad. 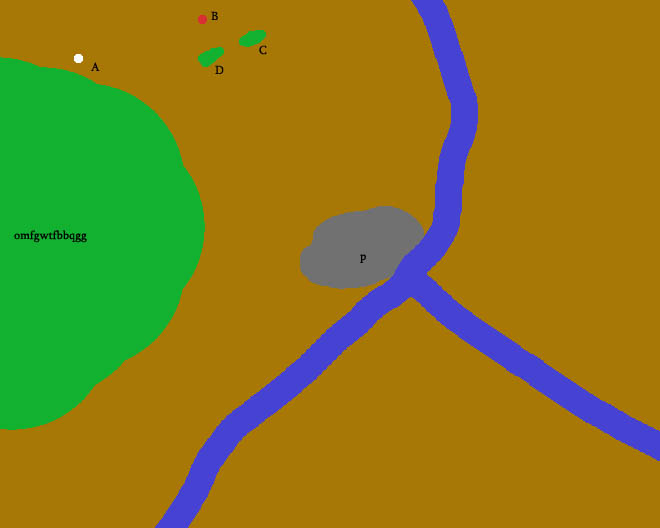 As Joe from Family Guy would say... 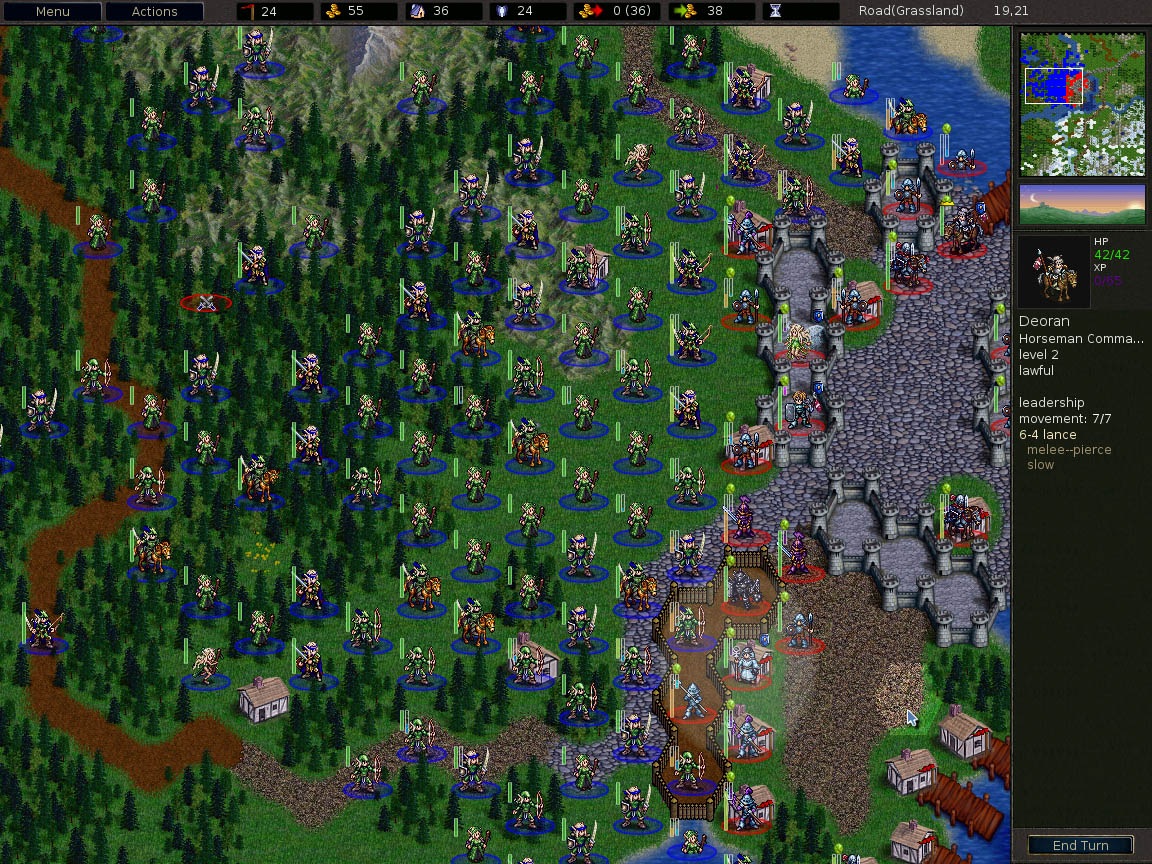 1. Hard 1.1.7
2. 8 - had to replay it twice, and didn't like it much at all.
3. objectives were clear, just not much fun to achieve.
4. dialog and storyline were awful. After clearing out the bandits and undead for the elves, the ungrateful brats try to genocide my town? Thanks a lot, you punks.
5. You have to minimize the number of elves that are killed, lest you get completely overwhelmed, while the stupid shyde sneaks around, flitting this way and that to evade her pursuers. I thought they wouldn't attack her?
6. -1. It sucked.
7. Where's my recall list of the other elves? I had a Druid and a Sorcereress, plus 4 Heroes, that could have been useful. And why do I have so little money? And given that Wesnoth controls Westin, why don't I have all the towns in the immediate vicinity already under my control?
Please redo this as a proper climatic battle, not a "sneak the ungrateful elf around while her evil companions kill my painstakingly nutured troops".
Top

Objectives: the "stop the elves" objective is pretty vague. "Get whatshername to the tree" is simple though.

Changes: I basically agree with Jags, although without the semi-rant tone.

Ah well, another campaign down.
Top

(1) What difficulty levels and game versions have you played the scenario on?
- normal, 1.1.8

(3) How clear did you find the scenario objectives?
- not so clear

(4) How clear and interesting did you find the dialog and storyline of the scenario?
- not so clear...the elve lady said the elves won't harm her...but they did. and when the elve lady died, i won??

(5) What were your major challenges in meeting the objectives of the scenario?
- to send the lady to that tree...you need some baits and just rush the lady to the tree. this without killing any enemy or else more enemies will spawn and block the elve lady. to win the scenario, you must do something that is not commonsense.

(7) What, if any, are changes you would have made to the scenario to make it more fun?
- the premise is very good. to escort the lady to destination while defending the city. i think you just need the destination to be somewhere else not where the main attack is coming from.
Top

Version=1.10
(1) What difficulty levels and game versions have you played the scenario on?
Easy, or whatever it is.
(2) How difficult did you find the scenario? (1-10)
I would have to say an 8 because of not knowing that they TRULY do not run out of reinforcements EVER.
(3) How clear did you find the scenario objectives?
Because I took all of my "special units" to protect excluding the leader, It never triggered the event until I had AT LEAST 50 level 1 elves, assorted spawned and attacking me. Then it was to late to get that little thing over there.
(4) How clear and interesting did you find the dialog and storyline of the scenario?
Eh, I killed the marshal on the first turn thinking that would finish it up by using a marshal of my own, an elvish hero, and some other assorted units. that kind of messed up the story.
(5) What were your major challenges in meeting the objectives of the scenario?
Keeping that many elves back.
(6) How fun do you think the scenario is? (1-10)
It's a blood bath, Kind of fun but it gets tiring after tat many elves being there.
(7) What, if any, are changes you would have made to the scenario to make it more fun?

(a)
You Might want to put some kind of unit cap on the enemy reinforcements because I actually had 200 level 1's attacking my 20 lvl3 units before the computer crashing on account of not having enough memory to store all of the unit's information in. I'm not kidding, I got an error message about it being out of memory or referencing something or something like that.

Of course my computer only has 256 mb ram so...
(b)
Give the elves some strategy other than swarming me, I just slaughtered them like crazy.
(c)
As said before, get that marshal to stay behind his own lines until I at least understand that he shouldn't be killed.

My strategy is killing everything, a strategy like that,? With high level units? On a map like this? = problems
Top

Version 1.2 - easy.
After that stroll in the dark, er 'Into the Depths' I was looking for a challenge. I suppose I could have killed off a few elves just to get them into a spawning frenzy but I found it easier just to recruit a few dumb villagers, have the elves chase them and quietly move Ethiliel to the meeting place, wait for one of my goonies to get killed and listen to the dialogue of having the meeting at the tree, view the new objective and then plunk Ethiliel on the x. Actually, I found out that it didn't make any difference whether Ethil made it to the tree or was just killed, the ending was the same. Those last two scenarios need some work, the rest of the campaign was fun.

Now I can try a more challenging campaign.
Top

Having taken a long break from Wesnoth, I downloaded 1.2 yesterday and played through South Guard on Easy, allying with the elves. I just want to state that I agree 100% with SmokenJags regarding most of his points (with the expection of 'too many villages' - I didn't notice this). In my opinion, this scenario is, in its current state, a terrible way to end an otherwise good campaign.
Top

(1) Hard "Soldier", Wesnoth 1.2.0
(2) I have never been able to move Etheliel to the Great Tree. However, having Etheliel die is apparently sufficient to "win" the scenario, and that is easy.
(3) The scenario objectives are not clear. At first I moved Etheliel next to the Elvish Marshal, instead of toward the Great Tree. Why would Etheliel go to the Great Tree if the Marshal was not there? Also, the use of blue shields is not consistent. Normally, a blue shield means that I lose the scenario if that character dies. However, in this scenario, if Etheliel dies I "win", if Deoran dies I "lose", but if Sir Gerrick dies, the scenario continues!
(4) I cannot believe that Mebrin had so many Disciples. Why did these Disciples not fight the bandits or try to recover Mebrin before? Why does Etheliel say that the elves would not attack her, even if I already had her attack the elves by that point? Also, if Etheliel is dead, how can she speak during the ending?
--Kernigh http://www.wesnoth.org/wiki/User:Kernigh
Top

(4) Interesting enough, funny.
(5) Finding WhatsHerName... she's not there!
(6) If she were there I guess this scenario would be pretty nice (change from the typical scenario)
(7) Appart from making WhatsHerName appear?

Maybe this should be done in a bugs thread?
Top

(1) Soldier - v. 1.2.2
(2) 10
(3) I was confused first until I realized that I encountered a bug. Without this bug I think I would have found them pretty clear.
(4) Was quite nice and interesting
(5) Ethiliel was missing so my objective was to bring Ithelden to the tree to interrogate with Ithelden which was impossible since he has a mind of his own ;)
(6) Right now I would call it frustrating
(7) Fix the bug, remove some villages and make it longer if this really is the last mission
Top

Return to “The South Guard”