Forum rules
Before reporting issues in this section, you must read the following topic:
Post Reply
3 posts • Page 1 of 1

I'm using the binary package of Wesnoth 1.11.0 on the english version of Windows 7 Ultimate and it is silently exiting when loading a replay of Delfador's Memories / Wasteland. Unfortunately, there is no relevant information in stderr.txt, I waited a few minutes after starting Wesnoth before I tried to load the save and checked the timestamp on the file and it isn't updated. There is also nothing in Windows event log.

This is from playing Delfador's Memories on Medium difficulty.

Whenever I try to load the attached replay of Wasteland, it gets until the point where it prints "Building terrain rules" and once the progress bar almost reached 100%, Wesnoth silently exits. I also tried with different screen resolutions - played the game full screen at 1600x900 -, didn't change anything.

The replay of Terror at the Ford loads without problem, but I'm getting an error while playing it, see attached screenshot. I clicked ignore all and continued with the replay, fast-forwarded till the end and realized that some units are displayed incorrectly on the last turn.

If you look at that screenshot, there's a Wraith near my keep, my Arch Mage, Chantal and one of my White Mages are next to it - then there's a lone level 1 Elvish Shaman in the enemy's keep facing the enemy commander and a wounded Deathblade while the rest of my army is about one turn's march away.

That's not how I played the game, I killed all the undead units before moving my army east, then Delfador was the first one who entered the enemy's keep and he immediately wounded the enemy commander very severely. Then I stalled a turn or two before killing him to allow my other units to get some xp.

Let me know if you need any more information to debug this. 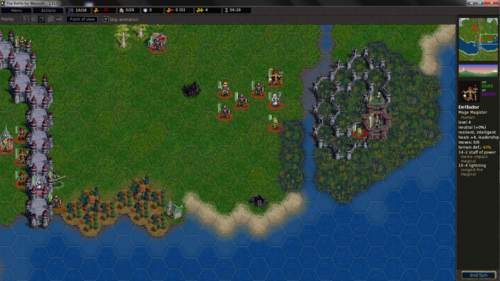 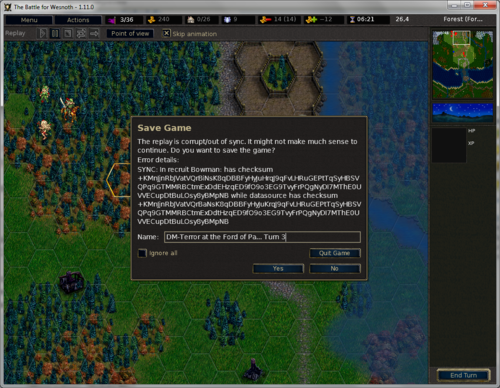 Just watched that replay of Terror at the Ford again and it already starts to get screwed up around turn 10. There's a Wraith right next to my castle walls, it doesn't attack and my units just ignore it. Well, it didn't exist when I played the game ...

Then, around turn 13, it looks like a bunch of my units leave a badly damaged enemy unit alive without attacking, including an injured unit right next to it that could have killed it. I neither withdraw that unit nor attack with it and it dies the next turn.

And finally, on turn 16, I seem to send my about to level Shaman alone into the enemy's keep while there's both the enemy commander and a Deathblade in there. That's where the replay ends. In game, the enemy commander was alone and I send Delfador using his 16x4 ranged @ 65 hp versus the commander's -50% arcane resistance, yielding 6x2 defense.

My unit list is also completely screwed up. There is no Elvish Sorceress, instead a few Shamans have something like 36/26 xp, there's a Bowman with 41/31.

Is it safe to play the next scenario or should I better restart with 1.10.4 ?
Top

roidanton wrote:Just watched that replay of Terror at the Ford again and it already starts to get screwed up around turn 10.

Err... according to the screenshot you provided, it already starts to get screwed up on turn 3. You might not notice a subtle change like different traits for the recruit, but there is a reason that message states "It might not make much sense to continue"...

roidanton wrote:Is it safe to play the next scenario or should I better restart with 1.10.4 ?

But I really doubt you'll have a problem in the next scenario. The replay is just a record of what happened (it is not used to start the next scenario), and an error in a record rarely causes a change in what was recorded. In fact, many people probably never bother to watch the replays of their own campaigns, so would not even notice this sort of thing. Play on.
Top
Post Reply
3 posts • Page 1 of 1