Forum rules
Before reporting issues in this section, you must read the following topic:
Post Reply
6 posts • Page 1 of 1

I'm playing wesnoth 1.10.1 (and 1.10.0) on my netbook (win7) with his standard resolution of 1024x600 (widescreen) (also standard resolution in many netbooks, and max in mine), the problem is that in the map selection screen the ok button overlaps the action bonus slider, so every time I press ok the action bonus slides and changes, in Wesnoth 1.8.6 with the same resolution (1024x600) the map selection screen looks ok (the button and the slider don't overlap).
Top

With "map selection" you mean some dialog when creating a multiplayer match? Can you please post a screenshot? Just to make more understandable what you mean and where you see this issue.
Top

Yes is the screen where you create the multiplayer game, the screen were you choose on which map to play and if for example you want to have fog of war or observers.
No right now I can't post a screenshot, because yesterday my internet connection expired, right now I'm writing from a library, as soon I can I will send a screenshot of the error.
Anyway this is the screen that I mean : http://taufanlubis.files.wordpress.com/ ... noth04.png

In the pic everything is fine, but when I apply the 1024x600 (widescreen) resolution, the "OK" button overlaps the "Action Bonus" slider.
Top

I’ve been aware of this for quite a while, but I’m unable to find a proper way to fix it with the current framework without running into new issues; not to mention that the issue is simply impossible to fix in 800x480 without introducing a child pop-up dialog to hold less commonly used options (say, time limit-related items) in favor of displaying the more frequently required ones better. 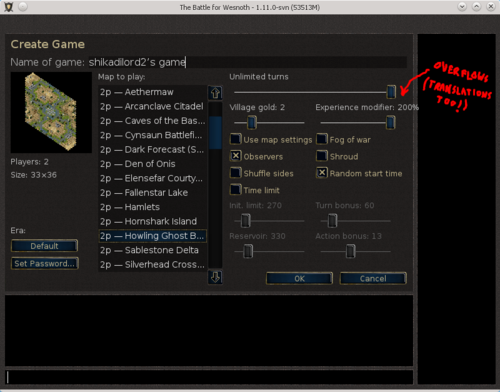 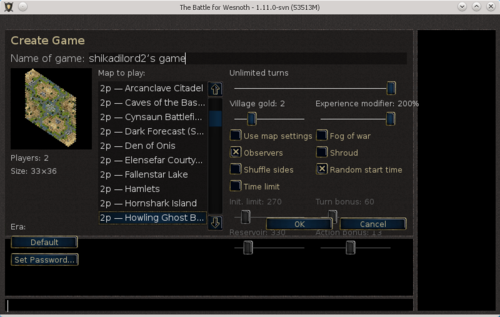 Yes, the second screen (800x480), show almost exactly what happens when I play Wesnoth on my netbook even if the resolution is (1024x600), odd that I don't have that problem in Wesnoth 1.8.6, ok at least its a minor problem, but still annoying.
Top

Yomar wrote:odd that I don't have that problem in Wesnoth 1.8.6

It’s quite simple, actually; 1.9/1.10 gained an additional game creation option (Shuffle sides) which resulted in an additional row of checkboxes moving the time limit options further below and closer to the OK and Cancel buttons.

Anyway, as you probably know reality is much worse than my screenshots, which were taken with a (not going to be committed) patch that makes the Village gold and Experience modifier sliders take up a single row together instead of one row each.
Author of the unofficial UtBS sequels Invasion from the Unknown and After the Storm.
Top
Post Reply
6 posts • Page 1 of 1