Forum rules
Before reporting issues in this section, you must read the following topic:
Post Reply
250 posts

I just installed 1.6.1, and it's quite a bit faster than 1.6.0 was. Thanks, devs!
And when he gets to heaven
To Saint Peter he will tell,
"One more Marine reporting sir,
I've served my time in hell."
Top

Re: Looping through windows locale registry

intellimouse wrote:it works like a dream without any performance issues.
I ran Process Monitor to see whether Wesnoth is still looping through Locale registry keys, and it is.

So, the fact that it loops through the registry keys doesn't help much. It's probably just an artifact due to the way Process Monitor works, unfortunately.
Top

I have problem with Wesnoth 1.6.1 becouse the CPU player is VERY slow!especially when the Pc recruit unit!

Northern Rebirth's final scenario is, of course, something of an unfair standard to hold the speed of the AI to, but I'm going to anyway. For the unaware, NR13, Showdown (I might suggest changing the h to a letter a bit later in the alphabet, but anyway), is a 4v5 map, with the player's side 1 being followed by five orcish AI sides, the player's side 7, an allied AI, and the player's side 9. The orcs do take a while to play their turn. In 1.6 it was over half an hour and I gave up quite rapidly. In 1.6.1 things have improved, but probably not by enough. 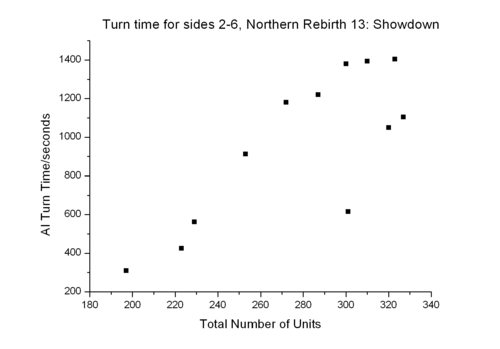 The three points below the S-curve represent turns 2, 3 and 4, whilst the AI was still recruiting and before the combat had got into full swing. There seems to be a region between 220 and 300 units in-game where Wesnoth is very sensitive to unit count and the AI pathfinding struggles to think quickly.

All turns played on a dual-core (though like others I note Wesnoth never goes above 50% CPU or much below 30%) 2.66GHz Intel system w/1Gb RAM, running Windows XP. I used the Windows 1.6.1 binary.
A wose by any other name would crush your feet
Top

There is some extremely weird issue on my computer:

Even 1.6.0 was slower than the 1.4.x branch. But I'm digging it. (AI extremely slow as most people are well aware)
Hosting is a huge problem, with it taking a very long time for it to save, and seems to cause my system to go into heavy stress mode.

I've tried upgrading to 1.6.1 and 1.6.2 with fresh installs on both occasions. Suddenly the game is slower than a grandmother with no arms or legs.

When I load into a multi-player game it stops on "Generating teams" or something. It takes forever!! Eventually I get in, but then the game is extremely sluggish, with it taking 5 seconds to spawn a piece, or move a couple of squares.

It's extremely annoying, I don't think anyone else is having these issues are they?
I want to help make BfW better...
Top

mastor3lf wrote:When I load into a multi-player game it stops on "Generating teams" or something. It takes forever!! Eventually I get in, but then the game is extremely sluggish, with it taking 5 seconds to spawn a piece, or move a couple of squares.

Okay, this sounds really unnormal, especially since you have a really fast CPU. My guess is that you have many addons installed and they are responsible for the problems you see. Yes, it is *NOT* wise to install all the addons available on the addon server. Several of the addons might be broken and in general every addon is responsible for some "extra time", at least when eg starting MP the first time with this version (the cache has to be built first!).

The (obvious) solution:
1) Remove all addons and try to go onto the mp server. If this works normally, either one of the addons was responsible or the huge amount of addons was the problem.
2) Install the addons you really want one by one and check if it still works after each newly installed addon. Once it breaks you know the offender and can post in the respective addons thread.

In general you should have a look into your stdout.txt (might also be named stderr.txt, not sure about this). On your box wesnoth should have no problem at all, at least on my Linux box with not this different specs everything works perfectly...
Top

ivanovic wrote: In general you should have a look into your stdout.txt (might also be named stderr.txt, not sure about this). On your box wesnoth should have no problem at all, at least on my Linux box with not this different specs everything works perfectly...

Verifying it is called stderr.txt
3P MP Scenario - Great Dwarves Escape
The best way to learn is to follow. In order to learn WML, you have to follow other's work, and check their codes.
Top

Hi, I'm a wesnoth user, who don't know much about computers. I'm going to try to explain my slow trouble. I'm using the 1.6.2 version and windows xp. My computer is quite powerful, but I've got some slow problems, in the second scenario, of Omega Tale campaign, in the war of terrador era. Why ? I hope that is not, too much incomplete.
Top

I just installed a clean copy of 1.6.2 with no addons and loaded a quick LAN multi-player 2 player map and the froze on 'Generating Teams' load-up screen.

This is the same exact issue I mentioned before. Some users blamed UMC's which is now proven to not the the case.

Installed 1.6.2 and now the game runs very slowly with alot of bugs. I can't load campaign saved games without the game freezing when either loading the game or ending the scenario. Cavalry units (horseman, gryphon riders, wolf riders, etc) dont have a movement animations they just flash from each hex to the next until they reach their destination. Any loading screens with a progress bar take about five minutes to finish depending on what it is doing. If at any time i click the mouse button while a loading progress bar is on screen the program will freeze and become unresponsive. Also any scripted camera movements in campaign are laggy and any scripted events that are triggered by a unit (like in DiD where you have to clear the goblin villages) are also laggy. These problems have only happened recently as of 1.6 but mostly in 1.6.2

DragonDragon wrote:Cavalry units (horseman, gryphon riders, wolf riders, etc) dont have a movement animations they just flash from each hex to the next until they reach their destination.

I share this problem. Had this on 1.6 and trying just now still have it on 1.7. I've uninstalled all previous versions of wesnoth and deleted the files, I'm not sure what's going wrong. I have Vista and a good enough laptop. This wasn't the case previously.
Top

Ok, here's a weird one. So today I boot up Wesnoth 1.6.4, it loads up fine, then I start the campaign Liberty, and then the lag hits. It takes a very long time to scroll through the map, lags between turns, and all round doesn't play well. So then I try different campaigns. Same thing. I try the multiplayer maps. Same thing.
The wierd thing is the computer I am running has:

The best weapon against an enemy is another enemy.
Friedrich Nietzsche
Top
Post Reply
250 posts