Thank you I will upgrade to the developer version.
Top

Just a bit of praise coming along.

(Hope the right forum, I just realized this board also exist alongside with the development board)

It is since a little while I played this, but all I can remember this was terribly good, especially the story. I frequently laughed out loud. I even always recalled those two dwarves just to see what they banter about. The battles as far as I remember were also quite interesting, along with some fun to play custom units, maybe the goblin pillager was the most peculiar, requiring some unconventional tactic to exploit well. I liked the map designs as well, the swamp was really a swamp, the sever was a sever, they had their atmosphere. The recurring locations, transformed as the story progressed were also quite nice.

So top quality all around! Even better than some mainline campaigns, I think, this is just absolutely really well designed!
Top

Well, maybe John Rawlins from New York (forum name Boru) will ever return here and enjoy reading your approval, but I am just the guy who got it working after being badly outdated. Any attempts to contact that guy failed.
I named your units.
Top

That's also a respectable feat, maintenance, the boring stuff, but without that it would be impossible to have this fine campaign today. So glad there are people around who keep these gems working proper as the game evolves!
Top

Just started to explore this wonderful campaign. I publish these 2 replays on Hard mostly because I need to send saves from one android device to another. The main tactical idea of the first scenario is just to defend and let horsemans to be killed by their own suicide charge attacks. But dialogs here are something.

I really need help with dire cave. I've killed the nightgaunt, got the spear and the troll, and I killed the zombie and bats. Nothing else seems to have any response? What do I do?
Top

@ Sirfurnace
So, you killed Lavinia, defeated the master of fire, Um Brok joined your team, and you got rid of the batcrafter in the southeast of the cave... What about that altar in the corridor which leads to the zombie chamber? Did you ignore it when exploring the cave? … It appears possible to walk past it without anything noteworthy happening, but curiosity should do the trick.

@ Aldarisvet
Have you already reached the Dire Cave? It took me a good while to figure out the operating principle of the Deadly Bones... I actually managed to get a circle of immobilized units around their keep, thus they became unbeatable – what might be a bug. I imagine that this has not just happened to me... Can you simulate/confirm this situation?
Top

Thanks for taking over and maintaining this campaign, Dugi, it's great!

I've found that the Swamp Savvy trait doesn't take on units that level. They still need 3 moves in swamp, and have 30% defense. The units which received Swamp Savvy on creation (like Misris or Eeep) need 2 moves and have 50% defense.

Here's a savegame showing the bug, check Eeep and Granak in the SE corner.

Okay, found and fixed, I'll upload it when there are more changes.
I named your units.
Top

Wow! Thanks for the quick turnaround. I've found some more minor issues in some scenarios:

Also, I just managed to earworm myself, by playing "Yakety Sax" during the chase sequence of "It Takes a Swampling".
Top

One more warning, in "Thunderstruck":

<Invalid WML found> The key 'target' is deprecated and support will be removed in version 1.13.0 (2)

I believe I saw that in some other scenarios, so it might be worth doing a search over all the scenario files.
Top

Okay, I have looked at it, seems I have fixed it all. Is that earworm bad? I might remove it. I really hate bad earworms, so I really don't want to infest anyone with any.
I named your units.
Top

Nah, Yakety Sax was entirely self-inflicted. But it fits the scenario beautifully (it's a staple of farcial chase scenes for a reason).
Top

I have been suggested to replace the assassin portrait with this one:
Spoiler: 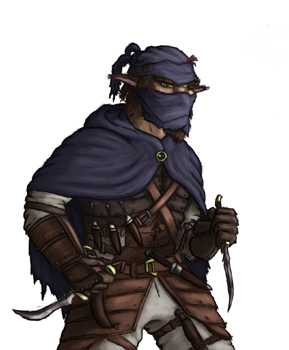 And the Eeep portrait with this one:
Spoiler:

I am neither the author of this add-on, neither I have any contacts with him, so I can only ask the community if they approve this.

Are there any objections against this change?
I named your units.
Top

Without dispute, the new portrait is better. Has it been specially designed for the hero? If it is not asking too much:
The knife blades a little wider? And would an assassin wear light colored trousers?
I personally would have liked the image even more, if Clammi kept the sly 'Rouser' glance...

Old Eeep's skinny build and sparse clothing says a lot about the life of a goblin, his tattoos or body paintings are fantastic...
still, such an appearance is probably too outlandish for the BfW-world. So, no objection.
Attention, by the script there is a day and a night version of the 'eeep-and-wolf.png'.
Top
Post Reply
66 posts