Thank you for Swampling. I enjoy it.
In Thunderstruck, I receive a message when I kill the last enemy. Most villages then return to neutral ownership.
All my units are then run together.
When I reach turn 30, I am told that I was defeated because all the enemy were not killed.
What am I missing?
Top

I also have the same problem with Thunderstruck
Top

commandeur wrote: ↑September 14th, 2019, 8:11 pm Thanks go Dugi for keeping this campaign alive. The humor and story are lots of fun.

I came here to report an image error that comes up at the start of Hammerheads and prevents the scenario from loading. "Image doesn't fit on canvas."
Condition 'as_int >=0' failed at /Users/vic/src/wesnoth/wesnoth/src/gui/core/canvas.cpp:1041 in function 'dimension_validation.' Extra development information: Image 'portraits/orcs/grunt-6.png', x = -73.

I'm playing version 1.2.0h of the Swamplings on an iPad.

That is a bug in the iOS port. The game shouldn't crash if a picture is too large. I have replaced that specific picture by one that is of the same size than the one not shown before it. You can update the add-on to get it fixed.

Araslav wrote: ↑October 31st, 2019, 11:06 pm Thank you for Swampling. I enjoy it.
In Thunderstruck, I receive a message when I kill the last enemy. Most villages then return to neutral ownership.
All my units are then run together.
When I reach turn 30, I am told that I was defeated because all the enemy were not killed.
What am I missing?

The scenario should be won unconditionally when you bring Zslap to 0 hitpoints. The only conceivable way you might not win is if the event execution crashes for some reasons (a change in wesnoth 1.14 has caused petty errors that could be ignored before to completely break scenarios in some cases). That would show an error message with semitransparent black background on the top left corner of the screen. Did something like that happen?
I named your units.
Top

I have the same problem in thunderstruck, here's the error message: 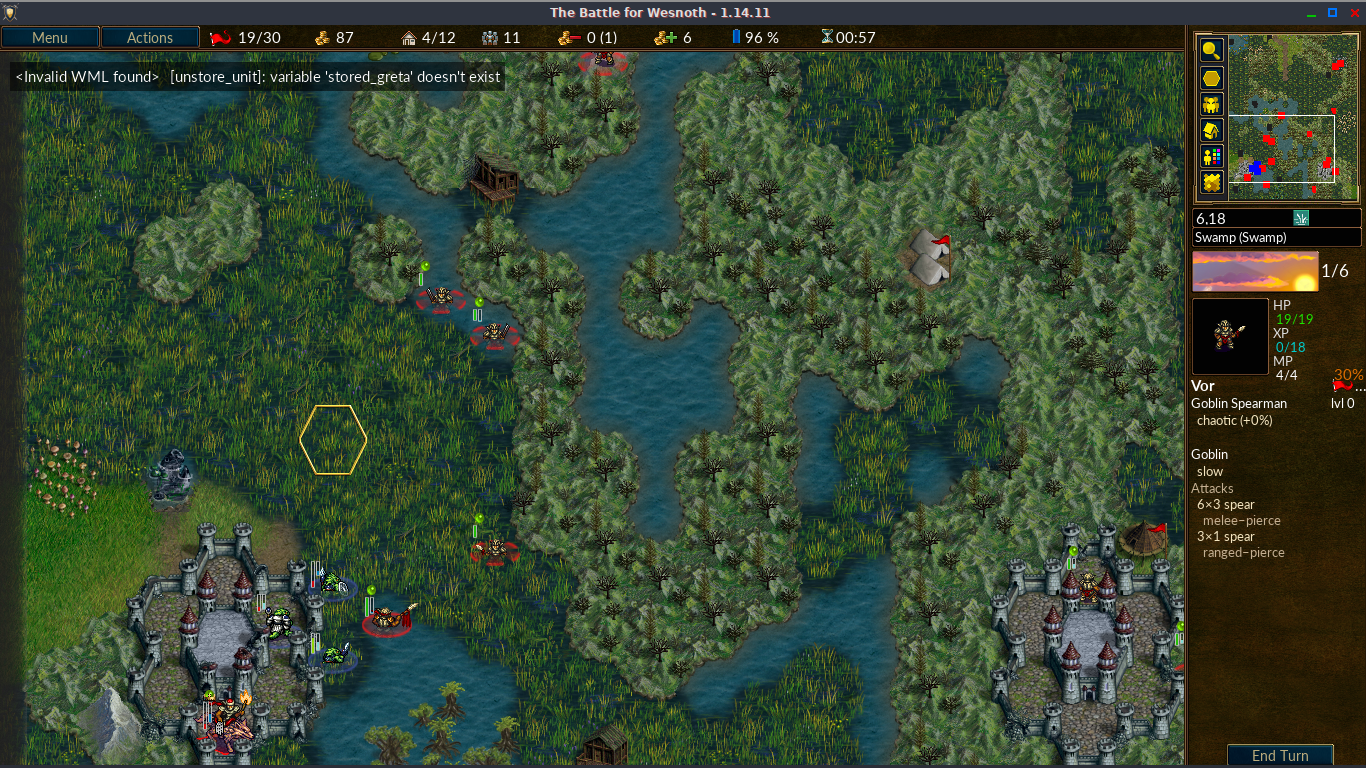 I thank you for maintaining this ucm campaing; this may very well be one of the oldest user-created addon for this game. I was an old user in this forum, from so long ago that I have forgotten my username so I created a new account.

GNA's bug server is long gone since I "disconnected" from this game due to RL events. But I came back, and have been replaying my replaysaves to reminisce good times. (In single player games due to time constrains I sometimes do cheat with : commands, but only changing HP values, very rarely "movement" values. And this campaing hit me hard when changing movement values for specific units due to some custom AMLA progression. "What witchcraft is this?!!" as some character would say. )


Dugi wrote: Please don't report bugs you found if you've copied save files from this campaign from wesnoth 1.10 and you've loaded them to play, it generates countless non-fatal bugs.

I really fear this! I hope some of you can help me with this issue I have with replaysaves.
System config is: win XP, game version 1.10.7 (last stable config supported before ALL my replaysaves go NUTS), 1.2 GB ram.
The replaysaves for this addon campaing were created in game version 1.10.3, some time before dev brach moved to 1.11.

Due to AMLA progression, replaysaves sometimes seem to not remember unit stats, so to facilitate replaysave "rescuing", I modify affected unit's .cfg files, just the variable which causes the problem (in my case, "moves" and/or "max_moves").

For this campaing, besides the aforementioned "trick", I would go as far as modifying events (as the 2nd cuttlefish "random" starting position in the episode vs. "Cat", bounty on "Kennison"), even deleting ones when modification seems way too hard for me (as the merman's surprise "this is merfolk land, begone!" attack which kills my (non-disposable!) unit & no way to prevent its death).

But I recently encounter this "bug" (not sure what it really is based on your statement), where WML complains on "illegal recall", when unit in question is in fact IN the "Replaylist" tag/tab/table. Two units afected. I compared the text for one of the affected units in the replaysave file with another part for a correctly-recalled unit (they are of the SAME unit type, to boot!), but I found NO difference, so I do not understand what is going on. I checked the counters in [statistics] tag/tab/table in the latter part of the files, but I did not found inconsistences that would led me to discover anything. So, I'm left stumped.

And thus, I ask some of you please review my replaysave files and give me assistance on what tag/lines change/remove so the replaysave can be "rescued". I'm sure that with removing/editing some lines this can be doable, but with >50000 lines of WML I would became old as a lich for when I finally figure what was the solution, so users with WML experience hopefully will find the problematic code faster.

The replaysave has issues with characters's HP, please ignore ONLY these (as I cheated only with units HP). The problematic issue starts in side=1, turn=21, with these lines:

I have attached 3 files: original .gz replaysave, modified uncompressed replaysave, and stderr log.
Please tell me if there are other needed files.
( "[d1]" stands for "decision path #1", renaming convention to manage my replaysaves. )

I see that there is no solution yet.
Is there a way to get more WML messages than stdout? For me this is not enough to get the picture on what the engine complains about. More specifically, how does the game arrange the WML statements from the replaysave? Why the game complains about missing text (because in fact it is there!)?
I really wish there was a graphical/GUI savefile editor, or at least a WML debugger.
Top
Post Reply
66 posts