Rebellion During the Dark Age

Rebellion During the Dark Age

3) What scenario did you think was the hardest?

4) Just so that i know what to eventually set the time limit to in scenario 7, Crossing the ford of abez, what difficulty level did you play on and how many turns did it take you to defeat the General(assuming you didn't wait to defeat him to gain gold)

5) Were any of the scenarios too easy?

6) Were there any scenarios you had difficulty with? If yes, on what difficulty level?

7) Do you have any suggestions for improving the balance?

9) If you ran into any issues(bugs) in any on the scenarios around what turn did you run into it?
current campaign version: 1.3.7
Last edited by Huston on June 18th, 2009, 1:22 pm, edited 5 times in total.
coded Rebellion During the Dark Age
Currently working on:
Era of the Future
Top

I want to play, it looks fun, but unfortunately I can't play.

I got this error message:

This happen when I am just starting on first campaign. 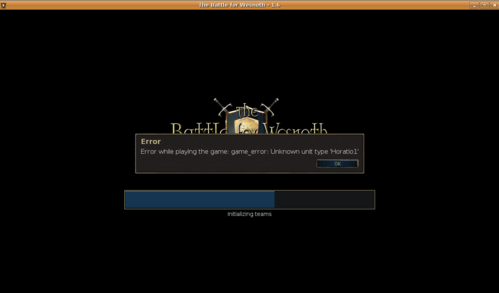 hmm. i haven't run into this it may have something to do with wesnoth on Ubuntu. because i have windows and Ubuntu computers and the Ubuntu wesnoth doesn't seem to run right, so i stuck to the windows version to develop and test it. I'll do my best to get it to work under Ubuntu's version of wesnoth, but try running the windows version of wesnoth via wine it seemed to work better than the wesnoth in Ubuntu's repos.


P.S. did you get wesnoth onto your system via synaptic package manager or by downloading it at getdeb.net and using gdebi package installer?

EDIT: i know for sure that the campaign works with windows wesnoth version 1.6.2

EDIT of the EDIT: Campaign version 1.2.1 uploaded. fixed something in the 5th scenario that would become an issue in the future and started balancing it on normal.
(still can't fix the problem wesnothplayer reported because he hasn't answered my question from my P.S.)
Last edited by Huston on May 27th, 2009, 9:20 pm, edited 1 time in total.
Top

campaign version 1.1.9 uploaded.
testing fix for the issue previously mentioned.
if you are in the middle of a scenario please restart that scenario so that the changes to that scenario will take effect. specifically scenarios 4&5.

Huston, I like the campaign. I played it through on easy and am now playing it through again on normal.

In the final two scenarios, Dan Tonk and the last one, I could not load saved games. I have not yet played that on normal so I can't say the problem is still there. The error message was something like " a saved player on the second recall list doesn't exist". When I hit it again I will give you the proper error message.

Quick question on the scenario where you are running beside the river - what is the purpose of this scenario? I am wondering if I am missing something. It is relatively easy to get Horatio to the signpost and I was just wondering what the result in the scenario is supposed to be.

I like the story and the music and have found the gameplay good. The ford of Abez scenario can be something of a pig.

thanks for your comments jim and i will see what i can do about speeding up the swamps of dread, but before i do that i need to find where i forgot a set of quotation marks in my ford of abez scenario file after i changed it slightly so that i can upload it with the change(meant to make the scenario take less time to get through.
as for the scenario where you are running by the water, i figured it might be a good chance to level up girith.(if you haven't already). I may change this scenario in the future though.
Top

Hi Huston, Just so you know, "The Search for Allies" is now locking up as well. In earlier versions it didn't. I can't get through a single turn without having to do a force quit.

I started playing this campaign and have also had Wesnoth freeze during this scenario. It happened twice and it ominously seems to happen just as the last few notes of a tune fade off. Might it have something to do with the music? (Btw, playing what I suppose is the penultimate version of the campaign on 1.6.1.)

Besides that glitch, the campaign started very nicely. A few typos here and there but nothing that careful polishing wouldn't fix. More importantly, the story was interesting enough to whet my appetite and I found the maps appealing (much more so than mine). But now, to give you more concrete feedback:

I found the first few scenarios a touch easy (playing on Normal), as recruiting and/or recalling a bunch of units and sending them along with the leader(s) usually resulted in an overpowering onslaught that resulted in a swift victory and extensive bonus for the next level. That, in turn, allowed for even better recalls and recruits in the following scenario and consequently even speedier victory.
Spoiler:
Actually, having recruited a whole bunch of Mages in Into the Swamps (I believe that's the scenario where you first get them) and having them reap the experience from the level 2 Saurians, I feared I may soon end up with a great bunch of grumpy old Mages of Light and Arch Mages.
In any event, I played on Normal since I don't consider myself an expert player, but this may all depend on what level of difficulty you aim this campaign for.

Also, as far as scenario 4 is concerned,
Spoiler:
the beautiful swamp map would not work well in terms of my mages' limited mobility, but fortunately both groups of Saurians (the left of its own motion, the right after some cajoling) bravely but stupidly charged at my units on the brink of solid ground so I could easily pick them off without suffering any casualties myself, and then still finish the scenario with lots of turns to spare. I guess this is an AI issue, but just thought I'd flag it anyway.
Oh, and finally this small detail:
Spoiler:
I went to check the code for scenario 5 to see if I can figure out what crashes the game and saw that one is supposed to get the hint not to kill all the Saurians at the beginning of the scenario. Just want to report that I didn't get this hint in-game (on Normal).
Overall, looks good, though, so congrats!
Top

Hi, I've just almost played this through on 'Easy' without recruiting any units. The difficulty-setting seems appropriate except for the last scenario (where I will have to recruit cannon-fodder, since I may only loose 4 units. I've already lost one assassin).

(Small bug: Allora doesn't have any images after leveling up)

I've enjoyed the campaign, it has unusually many scenarios that are not: kill the leader and quite varied maps to fight on.

About the don't kill all the saurians: I left two of them alive and so far I haven't received any benefit from it, maybe I should only have kept one alive? (Edit: looking through the code I see that I did get a nice benefit from it, maybe say something about it in the dialog too, so that you don't let people wondering).

hey guys thanks for the feedback.

and thanks to the fact i know now about when the game crashed i looked over the code again
and noticed that i forgot the .ogg part of the traveling minstrels music.

hopefully now that i fixed that little bit it will stop crashing.

I also fixed the hint not displaying in NORMAL difficulty.

i also gave scenario 6 a purpose. albeit a small one.

and I added a sorta hidden feature to scenario 7. be sure to read the dialog at the beginning of it.

as for Allora's picture not displaying after she advances, i haven't run into this yet. of course i also hadn't run into game crasher in scenario 5 so i may have missed it.

EDIT: Version 1.2.4 is has been uploaded to the server.
Top

the problem with scenario 5 has been rectified.

i hope version 1.2.4 allowed my campaign to be added to wescamp.


EDIT: My campaign runs on wesnoth 1.6a from the jaubty jackalope ubuntu release.

EDIT of the EDIT: version 1.3.2 has been uploaded to the server.
the campaign is 100% complete now that i have added journey and battle trackers.
it should also be pretty well balanced and have no bugs.
Top

I've played through until 'The Elvish Council Meets' and saw the beginning of 'Dan Tonk'. I then had to take a break and when I tried to load 'Dan Tonk' I got this message:

'The game could not be loaded: load_game_failed: Attempt to create a unit list for side 2, which does not have a recall list.'

I also noticed that Allora does not have an image.
Top

i was able to duplicate both of those. problem is i have no idea how to fix them.

coded Rebellion During the Dark Age
Currently working on:
Era of the Future
Top

Do you change sides & leaders between two scenarios? If so, you should kill the old side at the end of the first scenario. Or include it in the second and store the leader in prestart.
Top

no. the player's side doesn't change at all. it is set to side 1 throughout the entire campaign.

EDIT: from now on i'm only going to update this for the new releases of Wesnoth(for the most part.

EDIT of the EDIT: I have just uploaded version 1.3.5 of my campaign.(it just contains some story polishing fixes)
Top
Post Reply
86 posts