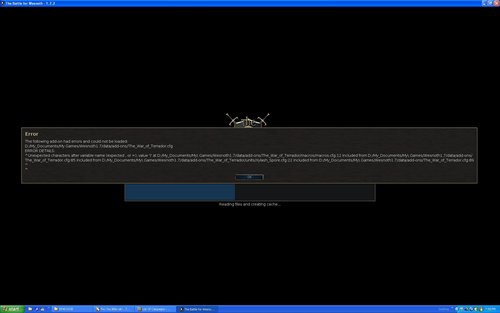 1) Did you enjoy playing the Campaign? What did you enjoy most?
i didn't finish the whole campaign yet. I enjoyed it very much since i found the space fights really really cool
2) Which scenario was the hardest for you, and on what level?
uh, there were a lot of hard levels. Since the units in this version nearly all have great weaknesses some main characters are very likely to die so i had to restart each scenario about 2-3 times
but i play it on hard

(terradors finest)
i'm actually stuck at "Stealth is the key" but not because it would be a too-hard level (although that 20-turn-limit might be tought) but because my computer is really slow.
I guess you know how many troops the enemy can get with each 1500 gold (2 enemies) and that draw-away didn't work properly when i just tried the scenario for the first time, one of the 2 enemies fully recruited and smashed my ally and the other one recruited just on castleful and then was blocked by the other so when i came along he still had 1200 gold and started recruiting (so only half of the units were at south). There was nothing i could do to ambush them and kill them silently so next time i will just try to do it the old-fashioned way.
Also i found some of the levels so far pretty weird. On level 3 the enemy recruited only 1-2 anti-tank-warrior, i had already 2 level 2 tanks to recall (one of them nearly leveled to level 3) so i just placed them there and the enemy kept suiciding. I won this level few turns after those reinforcements arrived (they never saw an enemy...). The AI is really lousy from time to time, they often attack my infantry with their anti-tank and my tank with their anti-infantry. (even if both had the chance to do otherwise)
and the only good unit i found against anti-tank was my spec-ops (doing 30-2 with sharpshooter ability or even better just smashes them)
so i'm now at "Stealth is the key" and would like to hear if my recall list is good enoug:
Level 3:
2x VC-79H Hyperion-Class Heavy Tank (they are strong but only 4 movement... they have become useless since the battlefield have become that big)
--------------------------------------
Level 2:
1x Flamethrower (strong+fast)
1x AR-02b Bomber
3x Spec-Ops (2 of them loyal, the third one nearly leveled up)
2x VC-79 Tank
1x Battlefield Medic (had more but they die pretty fast)
6x Heavy Weapons Specialist (2 of them are loyal)
--------------------------------------
Level 1:
3x Grenadier (1 nearly leveled and 1 with medium xp)
5x L67 Light Tank (some have medium xp; i recruited them in levels that were won but i had some gold left so i can recall them now for less than half of their usual price

i found the sniper pretty useless (they have too few hp and a weak ranged attack compared to a spec-ops) and i lost my main fleet (i had more bomber and those leveled flying scouts that get leadership ability)
Spoiler:
my Alderman is level 3 (and nearly AMLA), Ryter is lvl 2 and half way to lvl 3 (levels tend to be that big so he barely ever has a chance to reach an enemy), Newton is lvl 3 and has 2/3 of needed xp for lvl 4 and Flameslash isn't worth mentioning

3) Which person did you like best?
Alderman, although he's not strong (with 8 attacks strong is really useful) he's at least quick (and with 7 movement points my village grabber), he has +4 healing and that dwarf-defender ability
4) Do you have any suggestions?
some smaller maps would have been nice, also the units aren't that balanced i think
AI could use some improvement and it should recruit in a more balanced way
weaknesses and resistance are too huge, with ToD one unit can kill another with 1 strike easily (i don't think that's good since your troops die in the same manner...)
also please create a new name for recruits, call them recruits and don't use the recruit tag or whatever you did. Since in english recruit may mean both, a recruit (as a unit) and "to recruit" you used that "to recruit" i guess. Because in my german game they are named as the german word for "to recruit" (well more "recruiting" than "to recruit") which is really really weird.
5) What version do you have?
Wesnoth 1.6.3
TWoT - uhm don't know, i downloaded it 2 days ago

Im still alive, but Im now a Game Critic, so I have work. So dont expect any fixes or updates anytime soon. Sorry!

PS: If you want a cool game, try the one I am testing now: Runes of Magic. It's a free WoW! If you do get on, search out "Verinon" Bye!
Ehhhh... don't mind me, I'm just the annoying little modder who gets on peoples nerves. I'll just lurk till Someone says my name. :P

... If I brought this back, would anyone play it?
Ehhhh... don't mind me, I'm just the annoying little modder who gets on peoples nerves. I'll just lurk till Someone says my name. :P

yes dragon. i think a lot of people would. so if you are bringing it back hurry up and get it updated to 1.7.9's code.
coded Rebellion During the Dark Age
Currently working on:
Era of the Future
Top

I'm back, and ready to write some tracks

OK, its been quite a while. I am now in College, and have some free time. However, my files are gone, so if anyone still has them, could they please post them? Otherwise, I cannot continue this campaign. =/
Ehhhh... don't mind me, I'm just the annoying little modder who gets on peoples nerves. I'll just lurk till Someone says my name. :P

it's a good campaign
- Dipsey
Top

Working on updating to 1.8 now... Have no effing idea whats wrong though... my unit pics work, but i am having the same problem with the scenarios again.
Ehhhh... don't mind me, I'm just the annoying little modder who gets on peoples nerves. I'll just lurk till Someone says my name. :P

did you run wmllint to update the campaign?
coded Rebellion During the Dark Age
Currently working on:
Era of the Future
Top

We had better move our "chat" to the "Faction and Era" area, this thread is getting pretty cluttered. >_<
Ehhhh... don't mind me, I'm just the annoying little modder who gets on peoples nerves. I'll just lurk till Someone says my name. :P

I really enjoyed this campaign really because it is not just the only working sci-fi campaign it is really the only available sci-fi campaign (on 1.7-1.8 ). The only thing that irks me about this add-on is not the actual add-on but the fact that BfW is a 2D game and I prefer 3D with sci-fi games because 2D seems very unimpressive.

Aside from that, and the unavoidable bugs in the development process, I'm really looking forward to the next release.
Last edited by revenant on May 25th, 2010, 2:50 pm, edited 4 times in total.
Top

I'm wondering how you can look at the new drakes and say that...

But there is a revamp effort going on for the sprites in this campaign, so hopefully you'll be seeing some better visuals soon.

BTW, if you're more into 3D, this thread might interest you.

Just some hours before that the 1.7 server was shut down, I managed to archive a copy of the campaign. Now I found this backup and I'm uploading it here because I noticed that it has some different features than the one that you uploaded on 1.8 server. The changelog says:

I removed music, images and sounds folders due to maximum upload size (anyway, the music tracks are the same that you already have). I hope that this will be useful.