Forum rules
Before posting critique in this forum, you must read the following thread:
Post Reply
244 posts

battlesquid wrote:In spite of what I said before I would now like to receive comments, as it's apparent to me now that I need it. Sorry about my confusion, it's a totally new way of working for me... I hope you will not make a big deal about this. Let's move on to more constructive things

Well said Battlesquid. I am looking foreward to seeing the portriat.
Creater of the campaign, "Northern Rebirth"

Compleater of the campaign, "Son of the Black Eye"
Top

Here's Hamel holding his double headed war axe
I've drawn the arms without armor in order to get them right before armor is added. I think it will be easier to draw the armor knowing how the body is posing inside of it. I've also made some changes to his eyes in order to make him look a little more fierce.

I don't know, maybe his forearms are too small?

Anyways I'm adding things one at a time so it's easier to correct errors. 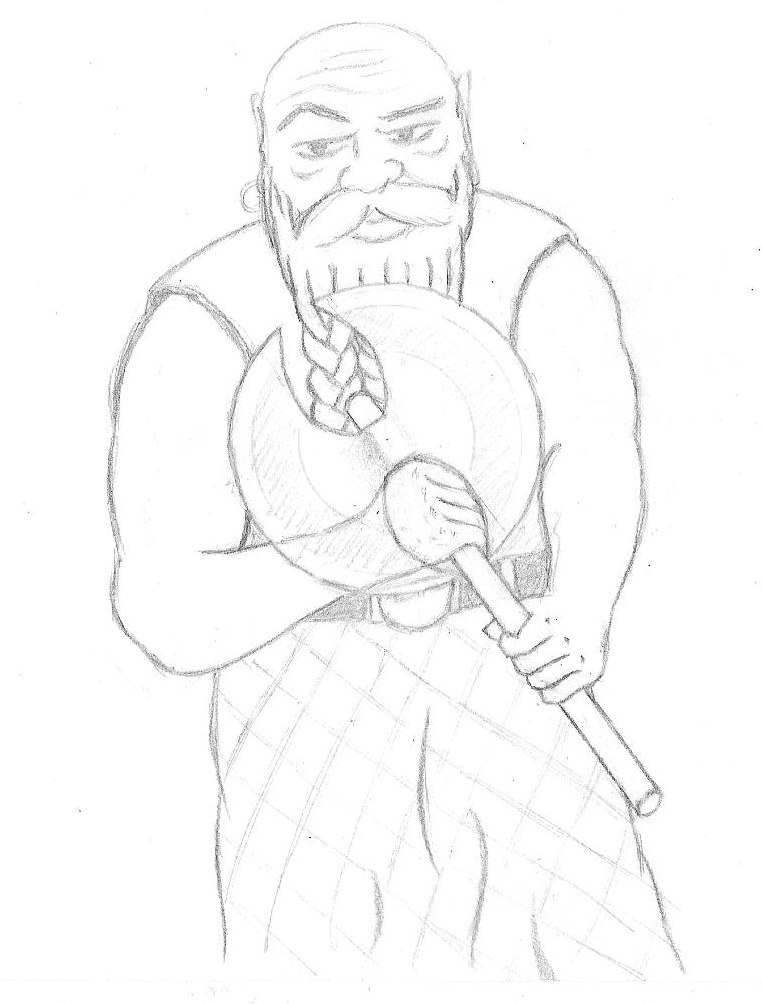 I'm the first one to admit that I'm not good at anatomy, but I can tell that his head is incredibly big compared to the rest of his body. The ears are too high up/far back on his head. His shoulders are too round and his lower arms, at least his right one, is too thin compared to the upper arm. Generally he has a very chubby and baby-like look. I'm also not too keen on the axe, it just looks like a disc with two oval cutouts.

That said I think this can turn out pretty good with some work. The face has character and I like his, uh, beard-do.

If I could give you one friendly piece of advice: look more closely at anatomy. Get reference images and study them, musculature an postures in particular.

I'm sorry if this is not the right place for commenting on this image.
mattiaswestlund.net • Facebook • Soundcloud • Bandcamp • Youtube
Top

It's comming along battlesquid. I think West has some good points that are worth looking into, but otherwise I like the way he is forming up. Keep up the good work.

Edit: And west, don't worry, this is the place to be commenting on this image.
Creater of the campaign, "Northern Rebirth"

Compleater of the campaign, "Son of the Black Eye"
Top

battlesquid wrote:Jetryl:
If you think my art sucks, then I'd like to know why. I will take your advice, although personally I don't think my art sucks. I was rather pleased with my sketch, as this is my first attempt to draw a dwarf, and the fact that it looks like a dwarf (at least to me it does) is mainly the reason why. This is still only a rough sketch to let me know whether the style/concept is what Taurus wants. That being said I would like your comments on proportions, stance, style etc in order for me to improve my draft and general drawing ability. Like you pointed out (very articulately) I need your advice to point out the mistakes I cannot see.

To be absolutely honest, your art does suck, however that is a relative term, mine sucked just as badly up untill about three months ago (although I wouldn't have said that three months ago), this is not a bad thing and it is much better than average (far better than I could do when I started doing any art last christmas).

I should forewarn you, Jetryl is very harsh with his comments, he doesn't do this out of spite, but because if he isn't then people don't seem to get the point (myself included) if he isn't because they assume that it isn't much of a problem and to give you an idea of how you are doing (harshness decreases as you get better). So do not be offended and do what he says (they are suggestions to improve your art, but they are also not optional if you want to improve your art)

The general shape of the head is good, however the ears should be lower, the eyebrow can't do that (well, not by that much), although the wrinkling above it is good, the rest of the face is ok for the most part, however it is at a face on angle, which isn't good, face on is much harder to get right and you are much better off doing it at a slight angle (similar to the attached image, its the closest example I could find of my practices, although the angle doesn't need to be so great).

The shoulders are too rounded, they can be at that angle, but making them straighter (not straight, slightly straighter) would improve it, also if that is leather (which I assume that it is) then when the shoulders come forwards (as they have) the leather wouldn't come quite so far forwards, so there would be more of the back visible and it would be slightly lifted off of his arms (if it isn't leather then it should be folded and hug his shoulders more).

EDIT: argh, forgot the attachment, and ignore any atonomy problems with it (I am aware of them) and the fact that it isn't complete, it is only there for demonstrational purposes 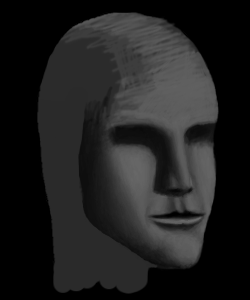 West:
Thanks for you comment. The head is as far as i can tell the right size, because this is a dwarf, and they are, as you say, "chubby" or "baby-like". The ears on the other hand are left overs really, just ignore them as they will no be visible under the helmet. I agree on the axe, it's too round (well that's not too strange as i used a pair of compasses to make sure it was round) so I'll try with two circles instead, like the scan below shows. I will also make his right forearm somewhat larger.

battlesquid wrote:West:
Thanks for you comment. The head is as far as i can tell the right size, because this is a dwarf, and they are, as you say, "chubby" or "baby-like".

I beg to differ. Dwarfs are short but they're not disproportionate. They're also stocky -- not chubby. Quite a bit of a difference there. On the other hand I've never met a real life dwarf so I might be wrong, but the're most often depicted having roughly the same proportions as humans except for wider shoulders and more stumpy arms and legs. Actually I laughed out loud when I read that, as I imagined what would happen if you called a dwarf chubby and baby-like to his face...

Anyway, if that is your interpretation of what a dwarf looks like then fine. It's your image

battlesquid wrote:The ears on the other hand are left overs really, just ignore them as they will no be visible under the helmet. I agree on the axe, it's too round (well that's not too strange as i used a pair of compasses to make sure it was round) so I'll try with two circles instead, like the scan below shows. I will also make his right forearm somewhat larger.

The new axe looks, much much better! I'm surprised you go to such lenghts drawing weapons; I usually just wing it. At most I use a ruler to make straight lines. Seeing that image I must say that you're better at drawing weapons than people. No offense or anything.
mattiaswestlund.net • Facebook • Soundcloud • Bandcamp • Youtube
Top

For what it is worth here is a link to a discussion on dwarvish proportions based on a study by sgt groovy. The images were clearly not intended for use in game, but as a reference for how Dwarvish body proportions are different than human proportions. It certainly should not be taken as canon either, but might be useful in terms of things to think about when drawing dwarves.

Medieval weapons are my forte. I can't draw people worth anything, but I can sketch up a few weapons and give you some more ideas as far as the axe is concerned, if you like. It'll have to be within the next few hours or so, since I need to use the library scanners and I'm going home for break tonight.

Maeglin Dubh:
My all means, but I plan to use the axe i posted. Naturally I have to redraw it anyway, so if I like your proposal more I'll use that.


Darth Fool_
The picture http://exong.net/wesnoth-attach/files/dwarf6_141.png shows a pretty well drawn dwarf body. I'll use that as a reference

Indeed my dwarf looks a bit fat, rather than muscled. Thanks.

I don't expect you to use anything of mine. But different perspectives can help sometimes, I've found.

Yes I agree. By using I mean to use as a reference - or if it's very good I'll try to draw it into the draft.
Top

Probably the biggest thing you can do is to break him "out of the block". In sculptors terms, a sculpture that is "in the block" shares its major planes with the block of stone/wood it was carved from.

For a drawing, this is the case when a subject is facing directly out of the page.

Jetryl:
I'll keep that in mind for later sketches. This one will not be skewed to an angle as I've put too much work into it by now to "start over". Breaking him out of the block seems impossible due to his compact shape (unless I change his angle, which I won't do at this point).

Here is Hamel with his mighty helmet

Notice the H (for Hamel) that is part of the helmet structure. The helmet was designed specially for him by his personal blacksmith. In the center is a "brilliant" shaped diamond. If nobody likes the H i will remove/reshape it.

For this sketch I only want comments on the head (the part that has changed since last sketch). I've also changed the eyebrows . I tried with hollow eyebrows, but that looked just silly. That's not my style anyways. Changing his left eyebrow made the left eye look weird so I have updated that as well as some forehead wrinkles. 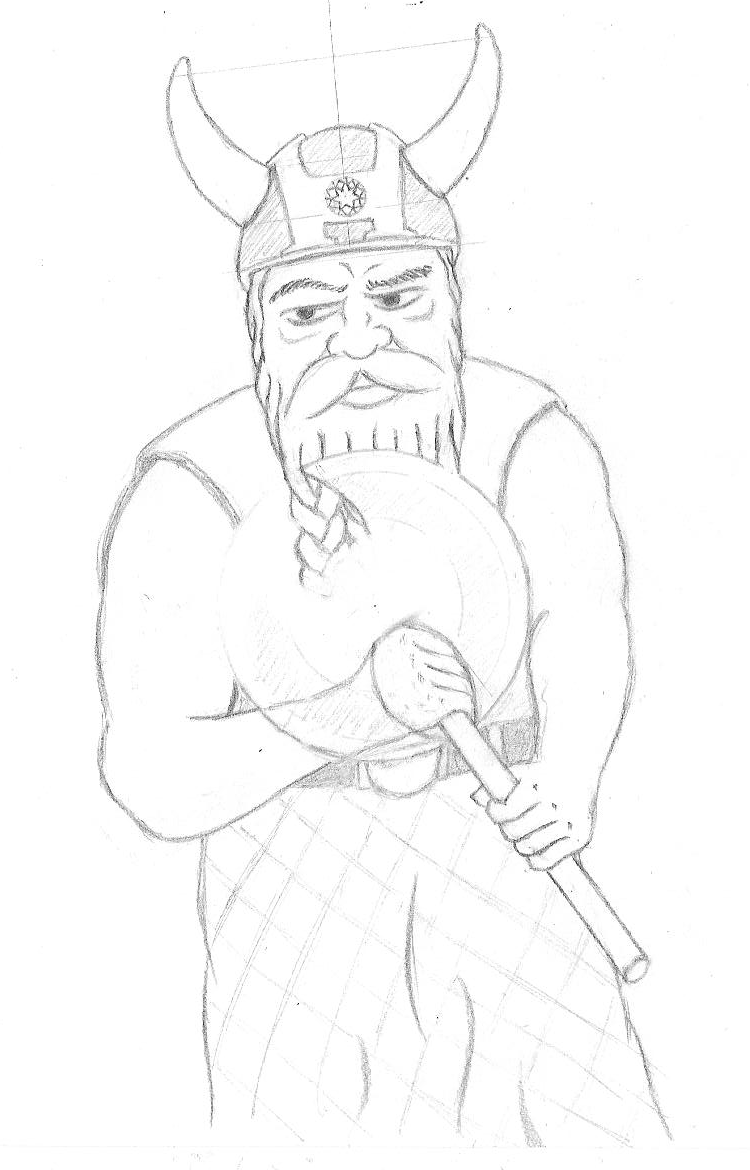 Double post. This isn't supposed to be here. My browser was being teh dumbzor.
Last edited by Maeglin Dubh on November 21st, 2006, 9:57 pm, edited 1 time in total.