Forum rules
Before posting critique in this forum, you must read the following thread:
Post Reply
113 posts

Maybe an WIP update? Worst thing what could happen is some feedback.
Top

That's not that simpe, remember?
Top 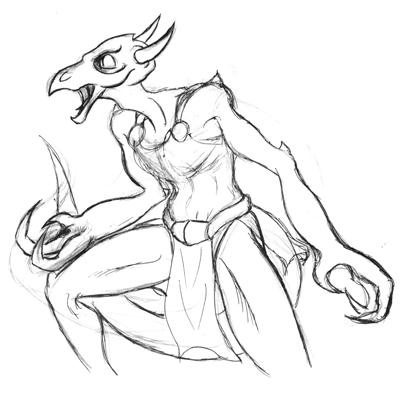 It looks reasonable, I don't really have too many comments other than that the eye area looks a little bit cartoony. I suppose once you shade it a little more, it should be fine.
My patreon
Top

Okay, here's the Fire Demoness lineart, and I'm pretty sure I can name quite a few problems with it.
I also made a rough drafts for the Shadow Demon and Incubbus. Not sure if I need something more defined or if I can work with these sketches. 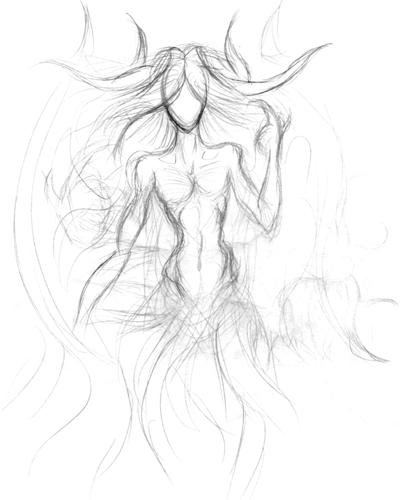 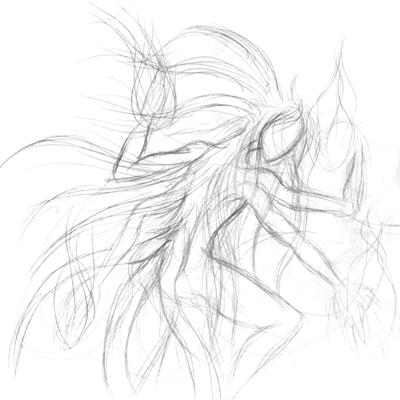 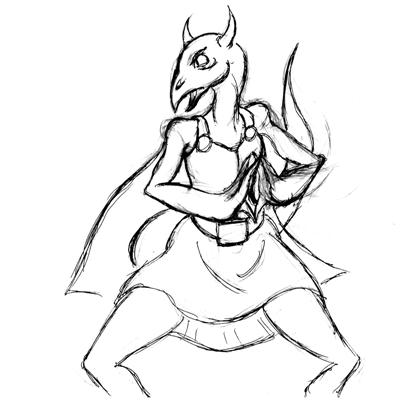 Update in two parts. These are the current portraits I made for the Fiend line. I'm honestly not sure if I got the lighting right, and it's obvious that this was also an experiment in drawing fire. 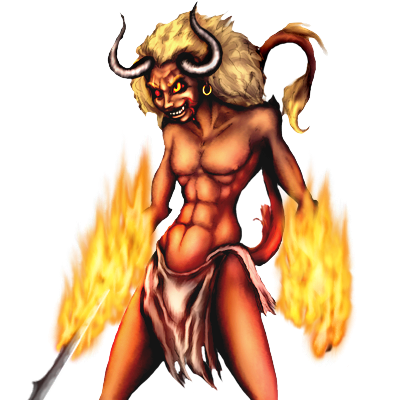 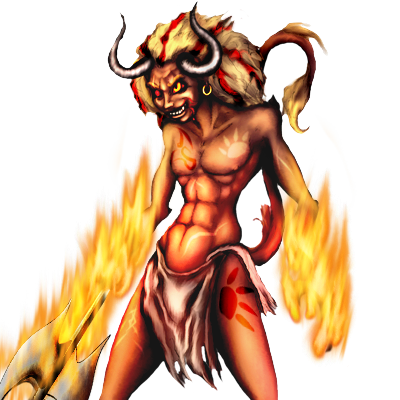 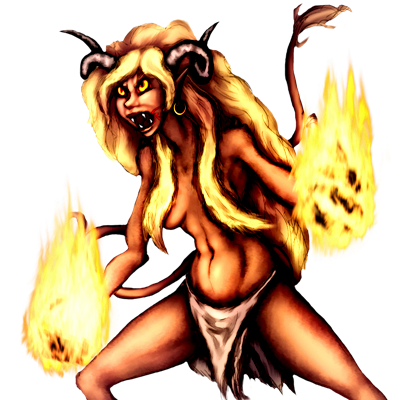 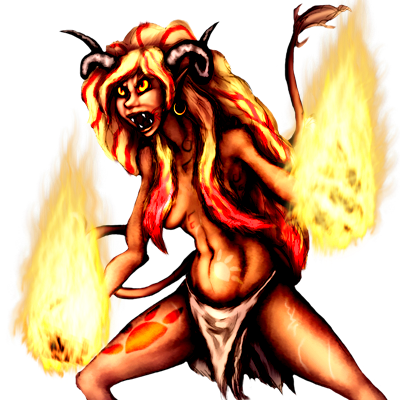 Back to the blue demons, these are the portraits I made for the Dreamwalker and Dreamweaver. Not sure if they look rushed of not. The swirls in the back should be a lot more transparent. Not sure how it will look like with an actual background. 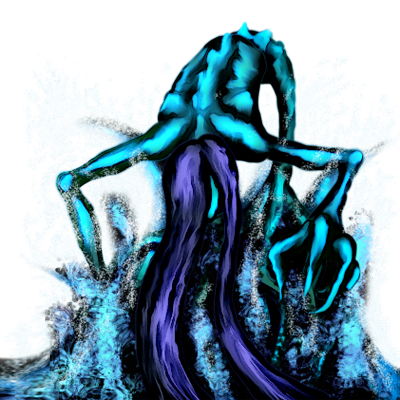 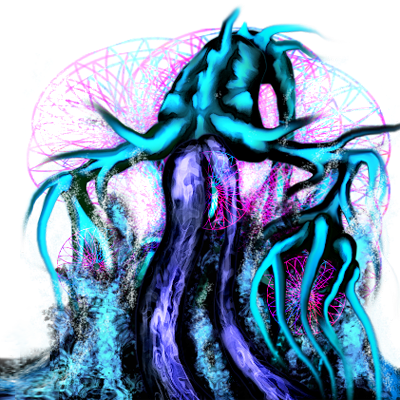 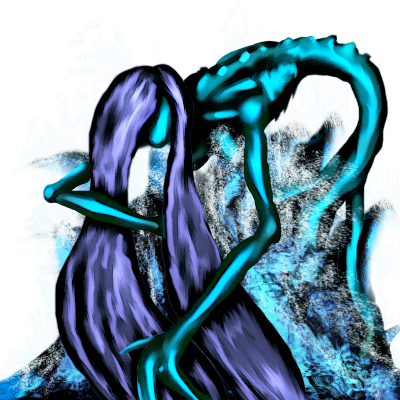 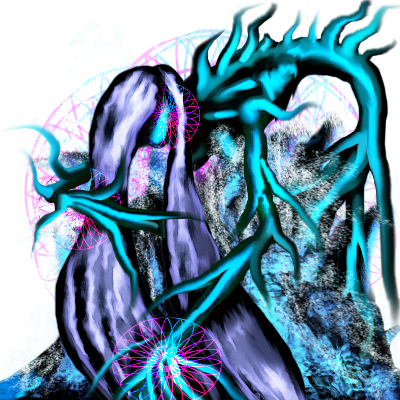 I'll use these as is. I agree that they aren't as good as your previous ones, so if you happen to return to them later, I wouldn't mind an updated version. Some comments:

Shape-wise, I actually think the Dreamweaver line is reasonable. The real problem is the coloration, which again has this really odd texture about it to me (especially on the hair and the 'mist'). The legs for the fiend line (both male and female) are a bit odd, but the eyes turned out better than I expected. The tattoos are also a nice touch.

The fire demoness's shape needs some work, the left arm and the legs are both rather odd. The shins are a little small and the left elbow looks too much like a mirror image of the right elbow. I suspect that a bit of shading here and there would also make it look less like the joints are bending at improbable angles. Rest of the shape looks pretty good.

(I've noticed that you seem to draw shapes pretty well, it's the coloration that throws it off a bit for me. Part of me wants to use the non-colored sketches as portraits, but I do wonder how well that would turn out...

The odd textures are due to a filter effect i sometimes apply when i feel like it makes sense. I didn't think it would look bad with the blue demons since if they're not that defined i could try all sorts of crazy things to make them look weird, but I definitely messed up with the female dreamweaver. I previously made the nightmare's hair look like it's some kind of portal to space, so i tried to create the impression that the Dreamweavers' hair morphs into an uneven reflective surface. This worked with the male version, but inbetween doing that and the female variant, i completely forgot how i did it, so it ended up looking like a silk bedsheet instead. Yeah, I'll have to redo that one eventually. Not entirely sure what you mean by mist as they're supposed to be emerging from the black water.

"Odd" is i believe a fitting way to describe the legs on the fiends, given how i can tell they don't look quite right, but not in what way. I'll look at some references and see if i can patch it up.

I have no real excuses for the fire demoness - i completely rushed the inking to get it done because i wasn't confident i can find the time to do it. I'll find a way to fix it somehow. If i can't, I'm gonna have to redraw the whole thing.
Top

So another thing, the circular structures behind the Dreamweaver sprites were supposed to be dream catchers. I think it looks okay the way you have them incorporated on the portraits, it's just the hair on the female portraits in particular that's a little weird looking.

Do you have any opinion on using black and white inked sketches in game?
My patreon
Top

That's a good question. I tend to correct a lot of mistakes digitally, and i think the black and white would stick out too much. If the problem is coloring, i could try flat colors, or different techniques. Maybe experiment with kitty's style.

How about this: When coloring the newest portraits, i will try and make multiple versions of the fire demon. I already figured id use a different style for the sword dancer to make it look more like the style of the original two portraits.

Edit: by the way. I was meaning to say this before, but the only reason why a lot of these protraits face right to left is because they're easier for me to draw, me being right handed and all that. Maybe it makes sense to mirror them. The portraits in the help menu could do with smaller sizes, so they don't push the text down this much.
Top

Good work on the facial expressions of the fiend, especially the male one looks really good

I finally got around to adding the portraits to Genesis. I also talked to one of my artist friends for suggestions on the coloration. They agreed with me that you draw pretty decent shapes for the portraits, so good job on that.

As for the coloration, there were three a couple that she suggested to focus on first. One is that for the dreamwalker and dreamweaver portraits, your outlines are really thick in some places, which makes the portrait look strange when put on a white background. The fiend and berserker portraits have better outlining. Second was the strange texture on the skin and hair, which might be resulting from the third problem, which is the color palette.

When choosing a color to draw like "blue", the actual representation of the color in the portrait or sprite isn't just a solid blue. It should be a gradient of colors going from blue to green or red, so that maybe the more shaded area is bluish-green, then gradually both lightens and turns more blue simultaneously. It looks like the shading here only uses brightness, not color contrast, which might be why it looks a little strange. (But in some areas, especially the edges of the flames, the coloration really does make it look quite nice).

Those are all my comments, I'll have to see how the other portraits end up turning out once colored. (:
My patreon
Top

As a matter of fact, I adjust the shadow layer for Hue and Saturation as well as Lightness, and color and shade each element separately, so that everything can be treated as a distinct entity. I tend to apply smudge with different brushes, to give it shape, then merge individual elements into single layers and shade it again to give it depth, then apply burn and dodge if necessary. The problem with the deamwalker and dreamweaver isn't the shading, it's the fact that I applied a watercolor filter to the blue layers, which sometimes looks good, but tends to really mess up the contrast. Thing is, I would not have kept it that way if I didn't think it looks like what I was going for.

The flames use a completly different technique, two separate ones in fact. The old one is more prominent for the male fiend, which is why those flames look more fake, while a newer, less complicated method is used for the female fiend, and especially the female berserker/helion. That said, neither of these techniques will work for anything else because they're meant specifically for flames and nothing else.

That said, I fixed up the hair on the female dreamweaver, and I think it looks better (although it would've been even better if I didn't mess it up in the first place - I might need to adjust it a bit more). The Incubus portrait is done, although I think I might have gone overboard with the whole corona discharge thing. I think the end result looks good, but we'll see it when I post it. Which will take a bit of time, If I'm going to make the alternate versions for the Fire Demons.
Top

SIGH. Okay. So apparently I didn't make much progress this week, but I did learn something very important. Namely that Kitty's method is way more complicated than my own, so it's not going to make my life any easier (but at least I know about the lock transparency option).

I'm still going to experiment with alternate styls and techniques on the fire demon, but it stopped being a priority. I'll do the fire demoness and post the next batch. Hopefully there will be no further delays.
Top
Post Reply
113 posts