Forum rules
Before posting critique in this forum, you must read the following thread:
Post Reply
113 posts

Okay, so I figured I'd try drawing a couple of portraits for units that don't seem to have any and see how they end up. Since I encountered the Rogue Mage unit line a few times (with two different sets of sprites), I thought it would be a good place to start. More to be added later, feedback is appreciated.

Looking good to me! There is no point in doing a lot perspective. I really do not think the red lines point out anything you need to consider.

A final cut would probably be placed above the highest knee anyway. I would suggest to still draw the boots and cut it later to a square at the knee and scale it to 400x400 as final step.
Top

Hm. I just noticed the cape looks weird at the bottom. Way too stiff and uneven.
Top

Coloring is going to be tricky due to technical difficulties, but until then, here's my Shadow Mage.
(image removed, see below for current version)
Last edited by BTIsaac on March 2nd, 2018, 8:44 am, edited 1 time in total.
Top

The sketches could be fine, it depepnds on what you are aiming for. These really don't look bad, and while th second guy's face needs work, there is plenty of time to work that out in the shading. Go for it.
(What techincal difficulties prevent coloring?)
BfW 1.12 supported, but active development only for BfW 1.13/1.14: Bad Moon Rising | Trinity | Archaic Era |
| Abandoned: Tales of the Setting Sun
GitHub link for these projects
Top

The fact that out of my three computers (and tablet), the only one that supports internet browsing is too slow for photoshop. I have bad experiences with flash drives, but im might need to use one to transfer stuff between them. Also, i have one keyboard/ monitor less. But I'll get around it eventually.
Top

Okay, Shadow Lord. You can tell I had Merlin in mind when drawing this.
(image removed, see below for current version)
Last edited by BTIsaac on March 2nd, 2018, 8:45 am, edited 1 time in total.
Top

It's nice to see more portraits in the game and I like your style. Here are some pointers. Hope I don't sound too harsh.

I think you could practice a bit with drawing the hip. With arm I usually aim that the elbow is about the same height as belly button and fingers are about the mid height of thighs.
segmentation fault
EBfW, GtR, Art, Old art
Top

Not sure what i can do about the rogue mage at this point. I'll see if i can still tweek it a bit.

The shadow mage is currently in progress. I'd like to point out that the pointy bit arount the left elbow isn't an elbow. I wanted to make the sleeve loose, so i put a few addittional lines there as an experiment to see which looks better. Those have since been erased and i moved the elbow slightly up so hopefully it's not that long anymore. Regarding the sword, by it being "too light", I'm guessing you mean his grip on the hilt is not firm enough. That along with the sword's angle isn't all that hard to fix, and I'm just about to do something about it.

If the sword arm is the only problem with the shadow lord, then that too is an easy fix, hopefully. Anyway, thanks for the feedback.
Top

I'm impressed, you have definitely a very good style!

I look forward to seeing more of your work!
Creator of: The Reign of The Lords Era,The Gnats Franken Dungeon
Co-designer of the (not-wesnoth) space combat video game Planet Bounce.
Top

These are sketches of blue and red demons I promised Nemaara yesterday in this thread:
https://forums.wesnoth.org/viewtopic.ph ... 15#p623932 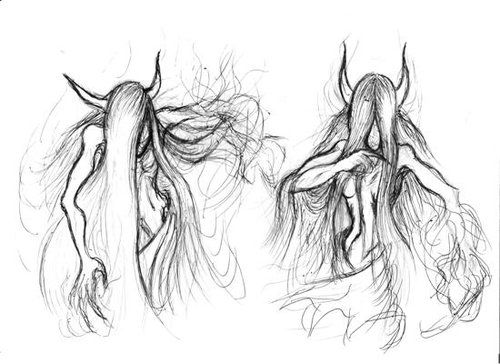 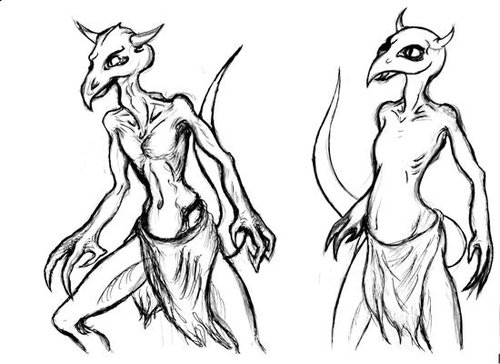 Allright, the Rogue mage line is ready. I tried to base these on both the older and newer sprites - the sword-cane is due to the Shadow Lord using a staff with a gem in the old sprite but a sword in the new one. The cloak design in particular comes from the old sprite, which I like better, as the new ones stand out a bit, what with them looking like they're made from 3d models, but I found myself liking the swirly effect on their sword which I kept for these guys.
The triangular hat on the rogue mage is due to his design being loosely inspired by 18th century european peregrine students, who incidentally were believed to be learning magic by superstitious country folk. Granted the only power they had was the ability to give accurate weather predictions, but that alone was enough to warrant a god-like status in a farming community. 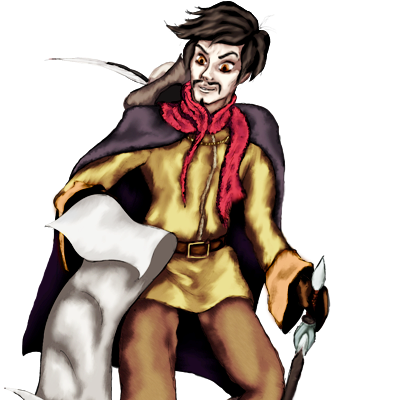 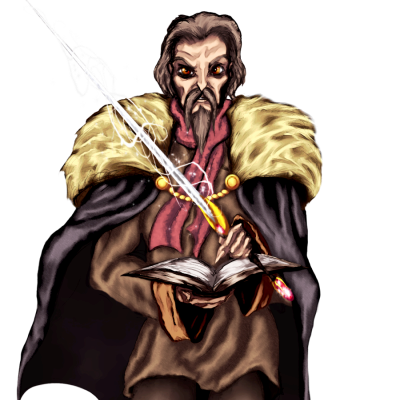 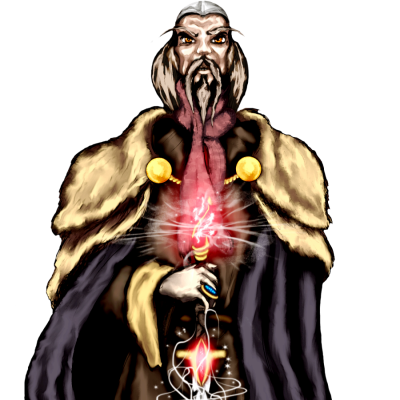 Have you seen kitty's portrait tutorial? It might help a bit if you haven't. viewtopic.php?f=9&t=21138

These are pretty good, but one thing I'm noticing is that it's very hard to tell where the light sources are coming from. To me, it ends up making the portraits look a little flat (almost, but not quite having that 3D feel). The other is that the texturing is a little bit off to me - it seems like everything is made of leather or some sort of woolen material, even the hair and skin. So, while the cloaks look quite good for the most part, it ends up making the rest look a bit weird, since it feels like I'm looking at people made of wool!

Otherwise, I think these are quite decent. There are a couple weird portions, but as a whole, everything is shaped well and clearly you have an idea of how to shade things. I also quite like that you can see how the the mage's personality changes as he ages and grows more powerful. Good job!

less hue, less contrast, slightly darker would be my guess. If you have flat colors in a separat layer, I would suggest to manipulate these. And I would keep some lines.

Open at your own risk:
Spoiler:
Yumi dressing up as Shadow Mage for Halloween! 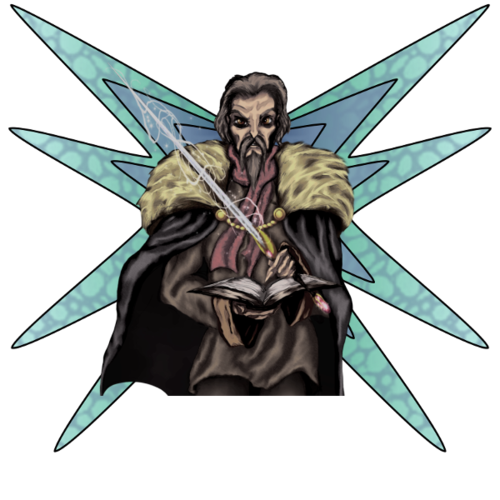 Hm. I had a feeling the lighting is going to be an issue, especially with the first one (not quite 3d nothing, that left arm is pretty much dislocated). I have this habit of not keeping layers after I'm done working with them, in order to keep working size down to a minimum, and i tend to merge everything once i consider it finished. That being said, i did nothing but photomanipulations last year (didn't have anything else to work with), so i can adjust things even if they're a single layer.
@Wussel: i think you've given me a great idea how to do that.

I figured i went overboard with the texture. I don't exactly have an eye for this sort of stuff, but i can't see it with the skin and hair, although i get that the rest does look a bit odd.

Okay, i did ... something. Not sure what. I think they look less like bas reliefs and more like people now, but I don't know by how much (also slightly less saturated). Unfortunately, i won't be able to upload them until i do the next transfer in a week or two when i post the first four demons. I mean i could take a picture of the monitor, but that would be silly.
Last edited by BTIsaac on March 2nd, 2018, 7:27 pm, edited 2 times in total.
Top
Post Reply
113 posts