Forum rules
Before posting critique in this forum, you must read the following thread:
Post Reply
144 posts

hmm, there is one thing my narrow minded view still has trouble with.
in the mainline campaigns of wesnoth, athenwood and kerlath are the borders to an unknown forest and wasteland that is too dense for exploration. in the west, orcs abound in a continent across the sea. to the north is a frigid and mountainous northland inhabited by trolls and gryphons. but in the map of son of the black eye: the northlands don't seem to be that uncomfortable at all. there is deserts and marshes, and thoria all the ice and snow seem to be simply due to currents. was that really the climate and not the global tilt? did I forget something, but how does anyone know that the northlands are directly above wesnoth? would if they are actually to the north east, and the land is curves to mean wesnoth is something of a peninsula?
Guys I never thought I'd come back to this forum after 8 years this is wild
Top

I suspect that the Northlands' deserts are temperate (cold) deserts, and I know marshes can occur even at permafrost latitudes (in fact, they're quite common there). Best guess: the Northlands are at about the same latitude as the southern part of the North-West Territories here in Canada, with a sub-arctic climate which allows for forested taiga-type terrain in areas that are well-enough watered. It would still be extremely cold in winter, with a short growing season. Areas like that are livable, but calling them "comfortable" is a stretch—that's why 3/4 of the population of Canada huddles against our southern border. ;P

(For what it's worth, I think I pulled a map linking the original and SotBE/Northlands map from a UMC campaign somewhere and used it in creating the übermap. Anyway, there's no canonical reason that I'm aware of to believe that the Northlands aren't directly north of Wesnoth. ::Shrug::)
Top

And here we have (::drumroll::) the amended Southlands map. The major differences include: much larger northern zone with the edge matching up with the southern border of the new übermap, sparse additional wooded patches connecting the two eastern forest zones, and the area around Meridius has been completely redone in accordance with thespaceinvader's guidelines (or at least as close as I could come—I wasn't able to get Barossus and Orienus on the same river, but they are rivermouth ports now, and Meridius is perched right at the base of a nice big mountain). I also tossed in a couple of maybe-Khalifate settlements on the edge of the desert, just for the heck of it. (And yes, the desert itself looks a bit scruffy—sorry about that.)

(Usual warnings apply—very large PNG file, some details may have been lost in RGB -> indexed conversion.)

Also, in case anyone wants to play with them, the layered GIMP .xcf files for both maps can be downloaded from http://hotfile.com/dl/130795860/d115354 ... ps.7z.html (The Southlands map may contain a junk layer called "New Layer"—just merge it down.)

Tomorrow, I may take a peek at the Green Isle map from tRoW to see if it could benefit from a little advanced cartographic surgery.
Top

Noy has probably contacted you with some requests regarding the Khalifa by now.

Some requests of my own (and espreon):
-The "minotaur lake" is named "Lake Aoir"
-The unname lake on the eastern edge of the map (east of Triththa), is at a fairly high elevation (it feeds in to the Great River, which crosses half the continent). If you ever expand the map eastwards, I'd like the lake to become even bigger, or feed into a lake/sea on that side. (reason: the eventide live close to it, and have a large number of sailors and a navy is fairly useless without a place to put it)
Wesnoth UMC Dev
Stories of Tarlyn (on hold) - Era of Strife - The Dark Hordes
Top

No one's contacted me with any requests about the Khalifa yet, but I'll be glad to tweak the map if there's something that needs to be done in that regard.

I'll relabel that lake for you as soon as this migraine goes away (this is a very bad time of year for me, headachewise). As for the big lake/inland sea, I admit I didn't work out the geophysics involved with it very carefully—I just needed somewhere for the Great River to come from. The current setup does allow for it to be extended eastward, but having it drain into another ocean doesn't make geological sense. Hmm . . . Would a honking big inland sea, possibly connected to the ocean via one or more canals, suit? $DEITY knows, there was enough naval warfare in the premodern Mediterranean, and it's a lot smaller than an ocean . . .
Top

As for noy's request, I believe he wants the sandy wastes to extend all the way to the dulatus hills. (so crossing from the estmarks to kerlath means crossing a desert)
Wesnoth UMC Dev
Stories of Tarlyn (on hold) - Era of Strife - The Dark Hordes
Top

Okay, sorry it took me so long (I had a freaky problem with a new version of the GIMP refusing to antialias text, possibly because of my system settings—guess it's my own fault for using a beta). Here is the amended übermap with "Aoir Lake" in the place of "Minotaur Lake", and an arm of the Sandy Wastes extending to the south-east corner of the Dulatus Hills. I'm not going to tackle the eastern extension at this time, since I'm not yet sure what to put north of the inland sea.
Top

Without any notion of anyone else's version of the eastlands, I've been developing a massive project around them. In my project, I've developed a map of the eastlands,
which is specific to the campaign(s). The map I've made is included with the LOTE Unit Release (on the 1.10.0 add-ons list); and there's been some discussion of the map and campaigns at http://forums.wesnoth.org/viewtopic.php?f=19&t=36213. I'm seeing one of three things happening here:

1. I rewrite my campaign to use this version of the Eastlands. I don't really like to do that because I've got a good thing going here.

2. The two are compatible; I just say my Eastlands are even further east than I intended originally. I developed them to be just across the mountains from Wesnoth, but I might be able to change that.

3. My map is incorporated into your map. I do not say this with any idea that this is going to happen; nor do I consider my map to be superior to yours.

If someone could take a look at the map and tell me what the most viable option is, I would be most grateful. Thanks.

P.S.: I can't figure out how the 'img' tag works, so I can't post the map directly here. To see it, you'd have to get the LOTE Unit Release; and the map image file is in the folder with everything else.

Let me start by saying that it would significantly help the discussion if you actually posted the map here. (or even in the thread you linked to)

That said, I've looked at the map, and I think it can be incorporated as the eastern edge of the continent. The great river mentioned in the map can't be the same one as the wesnothian one though.

There are essentially two ways we can make this work hydrologically:
1. Classic drainage divide
-East of the big unnamed lake we place a (small) mountainrange. Either an extra one or the mountains of gorn mentioned here. (if the second, the great river can't come *through* it)
-The eastern great river drains from this mountain range and from the dead mountains.

2. Bifurcation lake (turns out these actually exist)
-We say that the "silver lands" (current area east of wesnoth) are plateau one or more kilometers up.
-The big unnamed lake is now the source of *both* great rivers.
-The mountains of gorn are somewhere east of the big lake.
-I wouldn't put it past the eventide to partially dam either exit of the lake to keep the waterlevel of the other river up, thereby ensuring their access in both directions. (and ensuring the lake's drainage stays bifurcated, if artificially so)
Wesnoth UMC Dev
Stories of Tarlyn (on hold) - Era of Strife - The Dark Hordes
Top

AI wrote:Let me start by saying that it would significantly help the discussion if you actually posted the map here. (or even in the thread you linked to)

It certainly would be very helpful if I could do both. However,


Efinari wrote:I can't figure out how the 'img' tag works


I'm afraid I'm not very good at geographical reconciliation, or whether things like I have on the map would happen naturally at all. It would be sooo helpful if someone would be prevailed upon to clean up the map--make it more professional-looking, like the original Wesnoth map; and make it work geographically.

I'm not actually looking for it, but it would be really nice of someone.

I'm still not sure of how this might work. I'll need to rework my concepts so that the land is further east than I originally intended. I'd need to know, are the eastlands depicted on this map explored/settled? That would be really helpful to my project.
Kallin Efinari
---Creator of "LOTE Unit Release", "7p - Afterwards", and "Chain Lightning"
(Working on 1.12 port of "7p - Afterwards")
Managing compatibility between 4000K people's ideas of what happens? Forget it!
Top

They are. I can even link you to a wiki page describing the area.

, but you don't actually need it. You can attach images to your post in everything but the quick-reply form.
Wesnoth UMC Dev
Stories of Tarlyn (on hold) - Era of Strife - The Dark Hordes
Top

Still can't work that stupid img tag. How does it work to point to a file on your system?

Anyway, I can attach the map. 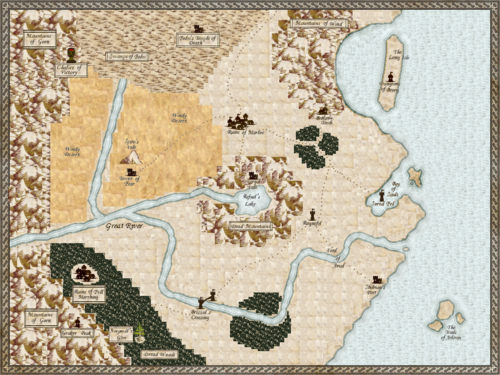 Efinari wrote:Still can't work that stupid img tag. How does it work to point to a file on your system?

It doesn't, unless the "your system" in question is a web server. Get an image hosting account.
Top

I did some Minutes ago decide to examine what Reconciliation could mean. Now I feel any .. disappointed and will try to close my Thread below.. btw: fine that this Thread exist as well as it Work gets done.

- regards, pale MetalKing
"Sir! We are surrounded by our enemies!" - "Excellent ! We can attack in every direction!"
"Make everything as simple as possible, but not simpler." -- Albert Einstein
No Source - No Binary - No Trust!
Map Wesnoth Springs - The great War [200x120],Player=9
Top
Post Reply
144 posts