So, here's something new, finally.

This is in daylight.
I could increase the contrast a bit more, but it tends to produce pitch black greens at night if there is too much contrast.
I think this seems to be a good compromise.
campaign ruthless in your nearest 1.11 add-on server
some wesnoth-related drawings
Top

I like this one more, I think because 1) I like the roof texture a lot better, and 2) because the supports in the walls look like they're made of or wrapped in the same material as the walls are made of.
Top

Although it would make sense construction wise I am bit afraid of putting the wall silk outside the supports of the wall, because it would create a large undivided surface which tends to break pictures.
And now it seems I can finally have a feather roof which is recognizable as feather roof (I hope this is what you meant with roof texture).

Grew dissatisfied with the tree, and I think the redraw is considerable improvement.
But something still seems to be off.
I suspect that the problem might be with the almost non-existent shading of the silk walls (because they are glowing because of the light inside).
The speculars on the roofs are not exactly aligned with the highlights of the walls.
My current best guess is that any kind of white light would desaturate, reflected or not.
So, if I am attempting non-specular highlight on the walls then it confuses the eye by same color highlight not being aligned on roof and wall, maybe (the red highlight at the right side of the roof is supposed to be reflection from the small house on the right, and that doesn't count here imho)?
Or maybe I should draw the highlights with different color somehow?
campaign ruthless in your nearest 1.11 add-on server
some wesnoth-related drawings
Top

For the record, I didn't know that it was feather.
Top

The willow house with the orange flag could perhaps be the final version as far as I can tell right now.
The one with the white flag is the old willow house for comparison. 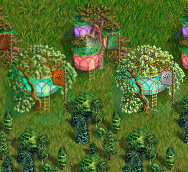 Brought the house a bit lower and the end of ladder even more lower in the picture, and I hope the tree looks a bit less unbalanced now.
And, the contrast of the greens is lower than previously, but perhaps it actually fits the terrain better?
Could not produce good results with higher saturation (more green) unless the contrast was even lower (me puzzled).
And somehow the picture appears about 10% larger and with even less contrast in the forum post preview here (me puzzled again).

melinath wrote:For the record, I didn't know that it was feather.

You like unidentifiable roof materials?
Afaik, in games any bright yellow thing on top of a house is easily identified as straw roof (although, afaik, real straw roofs are brownish gray).
Feather roof would need to somehow look like feather, and I thought I solved it by attempting peacock feather pattern.
But I didn't want the pattern to hit people in the face too hard, so I made it almost invisible.
Maybe too much invisible?
campaign ruthless in your nearest 1.11 add-on server
some wesnoth-related drawings
Top

I like the roof texture because it's interesting and clearly not straw. I think though that if you make it any more recognizable it might look strange, since the feathers would be gigantic. As it is, the feathers are pretty large.
Top

I don't know, the one with the orange flag looks really blurry and the stepladder has a strange angle.

The old one with the white flag looks, like, tons better. Or did you worry that high contrast and sharpness will make the village stand out too much?

I was thinking that if I extracted the part of image that depended on the color of the tree house then maybe the colors of the lantern houses could be randomized on the map.
They said in WML Workshop that this should be possible as long as the colors are not completely random but chosen from a predefined list.
In order to try this out, I first tried adding some color shifted images on top of white colored lantern houses.
The two villages next to the golden hex are the original images, and the others have color shifted lights added on top of them.
There are some slight changes to quality because of adding color shifted images, and some of those changes do not seem to be for the better.
It might be possible to try to alleviate the quality issues, but I am starting to doubt if this color randomization is a good idea at all.
Both versions are for C&C. 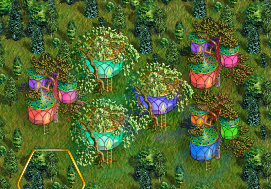 I think the change in color only emphasizes the fact that the shape of the houses and trees that support it are the same.

Just wondering, have you considered using the colored lights as the flag? In other words, when the village is captured by side one, it has a red glow, then if captured by side 2 it changes to blue glow, etc.

Strictly from an aesthetic viewpoint, I think the blue/teal glow houses look best, and I prefer the gray willow trees over the greeny green trees. Some of the other color choices may be too garish for elves. Overall, I think the designs are very well thought out, although the gray willow is definitely a cut above the others.
“It is written in my life-blood, such as that is, thick or thin; and I can no other.” - J.R.R. Tolkien

I dont think thats possible. The flag is actually a separate image that appears on top of the village sprite.
My spritework can be seen here.

@ em3
To put it more bluntly, I was indeed asking if the color changes had some kind of lameness factor and frankie feeling about them.
I was much more excited about randomizing the colors of the tree houses before, until I tried them out.
I would like to concentrate on drawing rather than policies right now, and I really don't know.

@ boru
Many of the team colors are not exactly what you might expect from a lantern, or have different brightness, and it is kind of hard to imagine gray colored light (in the case of black, and white, and also brown).
Actually, it is also not correct that yellow light is shining from the doorway, but the lantern base is white with transparent color painted over it.
And I think blue lanterns should be impossible with yellow light glowing from inside.
But I also appreciate some naivism in drawings that is the current case.
Maybe I will try more correct lighting if I do not get really bored.

(edit: removed detailed functionality analysis for reduced sarcasm) There are such garish red colors for the pine because lighter colors do not look good with the dark roofs anyway. So it turned out as a tree of red lanterns, and I see this cultural reference as an additional bonus.

I might need to tweak the greens of both of them more, but I am afraid of making them look too cheesy like like the previous version of the pine.

@ Frogger
Probably possible with WML by adding some images at event=capture if you allow flags in addition to team coloring of the lanterns.
I can imagine orcs attacking elves and capturing their villages, and the elves welcoming the orcs by changing their tent colors to the team colors of the orcs.

Anyway, here is something to look at, to get a better idea of what it would feel like.

Last edited by homunculus on June 21st, 2011, 10:14 am, edited 2 times in total.
campaign ruthless in your nearest 1.11 add-on server
some wesnoth-related drawings
Top

homunculus wrote:And I think blue lanterns should be impossible with yellow light glowing from inside.
But I also appreciate some naivism in drawings that is the current case.
Maybe I will try more correct lighting if I do not get really bored.

For humans, blue glow from yellow light is not possible, but elves advance into sylphs and shydes and fly over mountains, so if a blue glow appeals to you, I wouldn't get hung up in the technical details. When I look at the animated gif you provided, I'm not certain about it myself, I just thought I'd pitch the idea at you to see if you found it useful. Perhaps a small glowing lantern outside the house could change colors when captured.

I didn't want to go so far as to say the peacock-roofed treehouses looked like a, yeah, one of those places you mention, but indeed that is what they looked like to me. So if that was your aim you were on track, I just didn't want to offend you by saying that. I must say it's hard to imagine such a thing would be accepted in mainline though.

The previous version of the pine did not look all that bad, I just prefer the muted color of the willow. It seems more elven to me.
“It is written in my life-blood, such as that is, thick or thin; and I can no other.” - J.R.R. Tolkien

@ boru
Well, I do not think that it would need a description like the detailed explanation in my previous post, and afaik seeing an adult bar or casino from outside while walking along the street is not considered mature rated in any way.
Just a tree with red lanterns, no nudity or anything, but the kind of wording you use seems to indicate that you are very serious about it?
Although, maybe this type of mild humor was the reason why my campaign has been a total feedback failure.
Who knows, maybe my understanding of mild humor (really very mild in this case) somehow makes people sad.

And, red and colors close to red are typical to paper lanterns, and I would certainly like to hint paper lanterns more, because, honestly, they are really awesome.
Like one of the references: http://blog.koyalwholesale.com/wp-conte ... 578603.jpg
campaign ruthless in your nearest 1.11 add-on server
some wesnoth-related drawings
Top

I really don't know why some projects catch on and others don't, it's a great mystery to me. Here's one of my favorite lantern paintings Maybe a bit too sentimental for some (okay, almost everyone), but I like it.

Yes, I was serious about the red houses but I'm just a gadfly here with no idea what the criteria for mainline might actually be. So don't take me too seriously. But it seems like the elves in Wesnoth are a rather serious bunch and tend toward a rather restricted color palette in their garments -- usually greens and browns. Maybe that's why the willow treehouse struck me as the most elven. But hey, there's no reason they couldn't take their hair down and party on occasion.
“It is written in my life-blood, such as that is, thick or thin; and I can no other.” - J.R.R. Tolkien

My campaign: Swamplings - Four centuries before the founding of Wesnoth, the first wolf rider emerges from a tribe of lowly swamp goblins.
Top
Post Reply
120 posts