Forum rules
Before posting critique in this forum, you must read the following thread:
Post Reply
183 posts

Ahh...I see. So @bera made the transparent version already. @bera, if you have time could you help me make a non-transparent one? haha thanks!!!
Top

It's easy to make a transparent and non-transparent one, just add or take away a background color.

And like I said, a non-transparent version isn't really necessary, only used for unit descriptions.
But if you really want one, you can make one yourself, pretty easily.

But a problem is, if you look at my last post, the transparent one and the opaque one are two different sizes. So you'd have to resize it if you wanted a non-transparent one.
F:tGJ, Saurian Campaign
The Southern Chains, a fanfic
“The difference between winners and champions is that champions are more consistent."
~Sierra
Top

Telaron would you like me to fix the spear?
- Dipsey
Top

I'd appreciate it at the moment.

I'm tied up with studies.
Check out the FOSS game Sumwars
Wish I had more time for composing music...
Top

Pillager: Yes, as Hulavuta pointed out, and to my knowledge, transparent ones are used for
dialogues. All portraits I post here are transparent - I'll pm you a non transparent version (with a black
background I presume?). Also, I'm following the mainline standards, so these images come 400x400 pixels but
if you want a different size for the non-transparent ones (with same aspect ratio however) let me know.

As I have pointed out earlier, the only thing that really troubles me about the wolf rider portrait is the way he's
sitting. I fail to see any specific problem with the size of wolf's head or mane - besides I don't think there's a
precise standard for those, and I am guessing wolfs could easily have varying proportions as do humans or any
other creature. That said, I'll continue with the goblin archer, flats of which is:

note: not very sure about the legs, didn't sketch them properly so.. I may revise them as I start shading. 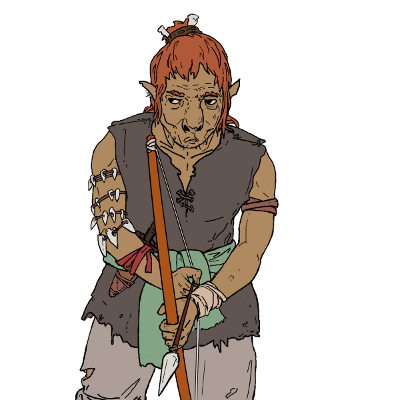 Goblin archer shaded. I found out a good test to determine the quality of shading on portraits. That's, zooming out - my earlier portraits always used to look blurry (to my eyes at least) viewed at reduced size. This one doesn't look as blurry, but I have some certain difficulty reading his face when zoomed out. If you suffer from the same problem I may give a retouch to it. 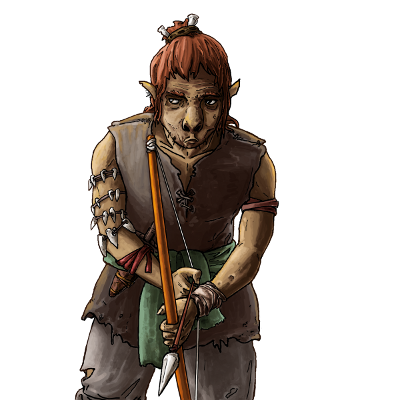 I think his hands are either too low placed or the bow doesn't have the right direction (placing the bow aimed more downwards or the hands a bit higher should make the pose looking right)...anyway the stance with the bow just doesn't seem right.
But since I am not an artist it's more of my personal feeling than a suggestion...
You are an Orcish Grunt: cheap, powerful, but effective.
Top

No, the bow isn't right, in fact, that doesn't actually look physically possible.

You could:
Put his right hand a bit higher, and adjust the angle of the arrow to it.
Move the left hand lower until the arrow appears to be resting on it.
Or, you could flip the perspective of the bow, and adjust the hands and arrow to that.

I recommend ether the first one, or the last one.


Also, that arrow looks a little too shiny and polished to be orcish.
Apart from that, great work

Frogger5 wrote:Also, that arrow looks a little too shiny and polished to be orcish.
Apart from that, great work

Ya Ithink too. It would need a texture and to be darkened. I do not speak of the light but the base color. Before applying the shading, the color is too bright, I think.
Top

Over all, great work on this portrait bera!

About the bow... I'd like to see his right hand's thumb behind the bow-string. If you study how a bow is fired (or have fired one) you will know that the thumb has nothing to do with the actual drawing back of the bow. The bow string is pulled back with the pointer finger and the middle finger. Of course, you might already know all this, in which case, I'd be giving useless advice.

Just as an after thought, the arrow shaft could be closer to the bow staff, but that's being picky on my part. (I occasionally draw a bow from time to time.)
Check out the FOSS game Sumwars
Wish I had more time for composing music...
Top

This is looking great! I don't know how to critique 'cause I'm no artist, but I kind of agree with the other posts here; the arms do seem a little awkward, but I don't know. Keep up the good work!
Top

In addition to Telaron's comments, I'd like to add that it would be hard to hold the arrow like that using just your fingers. Perhaps you could make it rest against the side of the bow, as though it was ready to be fired in an instant?
"I'm never wrong. One time I thought I was wrong, but I was mistaken."
Top

Thanks for all the critics. However, I really can't see the impossibility fore mentioned with his arms. To my eyes, it's a legitimate pose. I agree about the shineniness of his bow and arrow, which I'll revise.

Something I'd like to add: None of these portraits (mainline/UMC) should be read as images from technical books. I mean, my point with that portrait is not to teach folks how to shoot arrows. I never used a bow, and very likely won't have the pleasure either and what I did was mostly from my imagination. And if you ask my opinion, I quite like the way he holds his arrow, especially even more so after the crits, keeping in mind that he's a goblin but not a master archer

. Also I have intended him not to be in a shoot ready pose but something in between, and you could well imagine he could get into a shooting stance, etc. I'm not saying I don't value your crits, to the contrary they're really useful as I can now confidently envision someone's (bow) shooting pose, but again, effecting those changes would be a day's work for me, and wouldn't worth the effort, as such changes don't go easy once shading is put into the portraits.

elvish_sovereign: should I start working on the war hammer wielding guy? Based on A-Red's sprite I'm thinking
something based on Teutonic knights. Though I could use some details on his character a bit.
Last edited by bera on April 20th, 2010, 9:52 am, edited 1 time in total.
comics, comics
Top

bera wrote: I quite like the way he holds his arrow, especially even more so after the crits, keeping in mind that he's a goblin but not a master archer . Also I have intended him not to be in a shoot ready pose but something in between, and you could well imagine he could get into a shooting stance, etc.

Fair enough. He's your portrait and you can do whatever you want with it.

bera wrote:but again, effecting those changes would be a day's work for me, and wouldn't worth the effort, as such changes don't go easy once shading is put into the portraits.