Forum rules
Before posting critique in this forum, you must read the following thread:
Post Reply
1137 posts

Diaper Man, Diaper Man,
Does whatever a Diaper Man does,
Does he have powers?
No he doesn't,
Because he,
Just has a diaper,
Look out!
There goes the Diaper Man!
A lyrical adaptation done by yours truly. Needless to say, your welcome. I expect to see this on t-shirts by early December, just in time for the holidays.
Top

Re: artisticdude's Art, Sketches and WIP's: Christmas Is Com

The challenge was to draw something using the given outline of either France or Sweden, using one of two pre-defined palettes depending on the country you chose. I opted to go for France.

I think you could use some brighter highlights on the robes.I tried to demonstrate it in a part of the image,hope you don't mind.

My sprites,My Minitroops
Philip II of Macedon:"If I win this war, you will be slaves forever."
The Spartan ephors:"If."
Subsequently, both Philip and Alexander would avoid Sparta entirely.
Top

@artisticdude, you said there was a predefined color pallete? exactly how small is it? Oh and the ortrait seems to remind me of sprites from Double Dungeon.
- Dipsey
Top

dipseydoodle wrote:@artisticdude, you said there was a predefined color pallete?

It was 16 colors (not including transparency). I'd suggest checking out how some of the better artists handled the palette over at PJ, it's really amazing how many ways a skillful pixel artist can mesh colors. And it's also amazing how some lesser-skilled artists can not mesh colors to save them.

Anyways, I did a little more on the zombie/skeleton I posted earlier. Some palette changes, a few more frames, and a few random sketches for bosses.

They are cool and cute, obviously...
It's just these "bosses" evoke feeling more of "elite mooks", dual wielding skeleton could pass as miniboss...
They're just a bit generic and not intimidating enough.
Top

Shinobody wrote:They are cool and cute, obviously...
It's just these "bosses" evoke feeling more of "elite mooks", dual wielding skeleton could pass as miniboss...
They're just a bit generic and not intimidating enough.

I'll attempt some more original and intimidating bosses next.

Is this for a game?
Top

Originally, yes, it was for a mmorpg game, but I haven't heard from the developer in some weeks now and the project's website still says the project is closed for development, so...

I'll probably just upload the sprites to OpenGameArt when I finish 'em.
"I'm never wrong. One time I thought I was wrong, but I was mistaken."
Top

Random unfinished frogotto-esque tileset (approximately 16x16p scale). It's made using an award-winning palette (16 colors, IIRC) that was created by PJ member 'Dennis'. The palette is being used for the current underwater-themed iso colab over on PJ, so I though it'd be fun to try creating an underwater platformer mockup.

And I thought animating Wesnoth run cycles was challenging.

The angle of Wesnoth sprites is the hardest part of animating run cycles for Wesnoth units, but here the character is so low-res that the placement every single pixel matters, which means it can be really difficult to get it right. Unfortunately it seems I can't have him bob at all during the animation, otherwise it looks too jerky.

Some more stuff. This is an edit on Reepurr's original work. I really dislike how the legs turned out; I'm going to go back and redo them I think. Too skinny relative to the rest of the sprite, and I can't shake the impresion that they seem to be floating just under his torso rather than actually being connected to him.

It's been too long since I did this sprite stuff last, I'm afraid I've gotten a bit rusty, especially with Wesnoth sprite proportions.

The palette is a play off of the loy's standard armor palette, although I tried to integrate more hue shifting (threw some green and pink in there with the default blue).

...Oh, and for the record, I don't think the guys over at Pixel Joint are ever going to understand the concept of the TC palette.

And then a tiny bit more work on the above tileset. 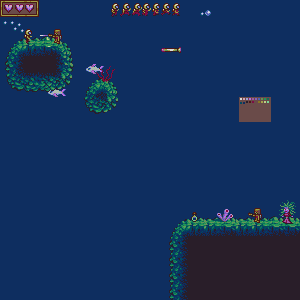 The edit on my original work looks good, if I say so myself

I'm not even going to pretend I'm an expert on this colour shifting thing, but would yellow be better for the highlights than pink?

@ frogatto-esque tileset: The fish look slightly flat, but that's the only critique I think I can come up with here. Awesome.
"What do you mean, "a dwarvish dragonguard with marksman is overpowered"?"