Forum rules
Before posting critique in this forum, you must read the following thread:
Post Reply
315 posts

I suspect that's a bit too dynamic for a portrait, but it looks sweet. I just love the mongol-y feel. Regardless of it's used, art is its own reward, etc.
"we alone truly exist, ... the shadows we traverse are but projections of our own desires..." 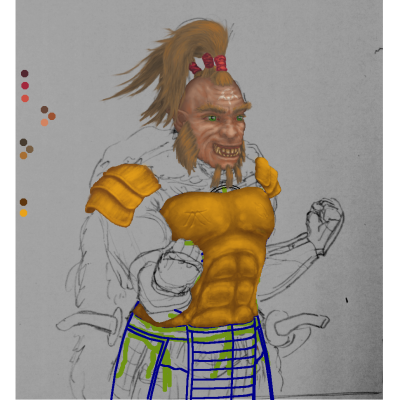 Hmm, I know this is still a work in progress, but you seem as if you have progressed far on the face, and I have to say that his expression seems a bit too friendly. He looks overly happy for an orc warlord, and not quite as stern and forbidding as I would have expected. Not that they cannot have the full range of emotions, but, well, it seems almost childlike exuberance.
Mainline Maintainer: AOI, DM, NR, TB and THoT.
UMC Maintainer: Forward They Cried, A Few Logs, A Few More Logs, Start of the War, and Battle Against Time
Top

The upright pose with the shoulders back makes him look like he's all happy and excited about something. Like if he'd be bowling and managed to get all the pins down, for example. Not like he's trying to tell someone he's gonna rip them to pieces.
Top 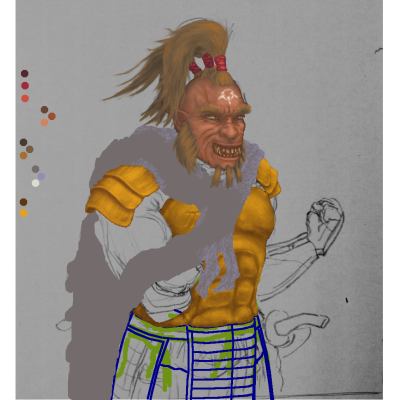 Looks much better. I'd maybe turn down the corner of his mouth a little, too.

How he just looks like a happy Arnold Schwarzeneggar...

TSI's right about the mouth that is.
Top

Haha, he looks maniacal now. I'm gonna say ditto to what everyone else said, try changing his smile. If you give him a more neutral mouth, it might look more like he's grinding his teeth or grimacing.
Top 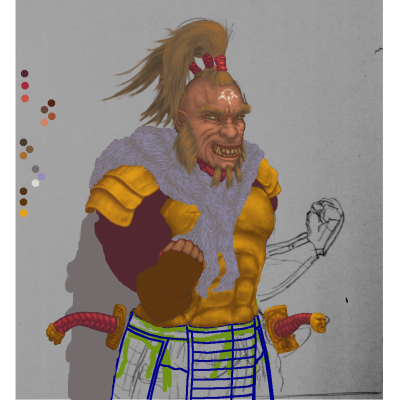 regarding the fencer - its not that i don't like the way the wrist bends. i just interpreted it a bit differently. if you think your posture was more natural, that's fine with me. mainly the hand is too big and the folds at the ellbow are strange.

but on to your new project - i really like the samurai elemts you use here! they add a interesting flavour i haven't seen often used for orcs.
his expression/pose still look awkward to me - did you change his mouth at all? make him angry not happy! and give him some skin colour variations, cheeks have different colours than foreheads etc. as i said last time; take care that your shading turns out consistent. the method of shading one detail after the other will make that difficult, because it is hard to think of the overall picture if one shades a little hilt and the rest doesn't exist yet.
i guess you plan to add the linework later?
Top

I will return to fencer later. Maybe he has too big hand. I'll also try to improve shading.

About warlord yes, my work is somewhat chaotic. But now it begins to look how I intended it to look. I will add the linework later.
About the grimace - I have changed the mouth. As you still don't like it I will have to redraw the face.

Thanks for comments.
Top

Mefisto wrote:About the grimace - I have changed the mouth. As you still don't like it I will have to redraw the face.

ok, this is how I think that it's gone wrong:

First, look at the lines where the skin has folded because of his facial expression, gently sloping lines radiating from the mouth, those kind of lines are caused by a big grins. Do the biggest grin that you can, and you'll see that the lines that form have the same shape as the ones you've drawn, a gentle slope, they probably won't be in the same place, but they will be that shape now do the most angry face you can manage and look in a mirror, the lines you want are sharper, steeper, more vertical and there would be a few much closer to the nose (although you may not be aiming for that extreme, generally sharper more vertical lines will make the face look more angry).

also his mouth shape. firstly there is too much of a smile in it. Secondly, although it is possible to make your mouth that wide when you are growling/snarling/looking angry, it is slightly unnatural, the mouth, again, will tend to be more vertical (as in wider top to bottom than left to right), and this will seem more angry to someone looking at the painting. Also, do the expression angry expression again, notice that because the skin on either side of your nose it being lifted up, the part of your lips half way between the top centre and the side is lifted up to, this happens in pretty much every angry expression you can do, and, generally, the greater the angle change caused by this, the more angry you look.

, I feel vaguely like I actually know what I'm talking about here... Mostly because I spent along time trying to work out how to get Reth's expression to be vaguely, and only vaguely snarly, but still, it's odd

Orc in progress: the grimace. The rest will come later, I've got problems with correct shading of metallic surfaces.