killing_experience is indeed not the correct name, I linked game_config documentation before.

Hiding bar might not be possible, but having large offset is good enough solution.

(1) I checked again and I had typo. it worked after fixing the spelling.


(2) I haven spent enough time reading/learning about lua (2day was my first day) to make sense of what you sent me regarding the offset. For now, I will play around with the .png size to recreate the offset of the bar as I did with the AE_Fallen_Dragonriders in case you remember. If I am not satisfied with it, I will come back to your link and do some further research on it. thanks for it anyway.

(3) yes your right. but i actually gave that ability to the attacker, not the gate. so when the attacker killed the a unit, it would loose the xp, just like the dimensional gate. however, there are the two bugs which I mentioned earlier which prevent it to work as intendetn

ghype wrote: ↑
October 19th, 2018, 2:28 pm
(1) it only happens once. when I kill another unit (e.g. the lv3 gate) this ability stops working. no more xp reducing even if first_time_only=no is checked everywhere
(2)currently it happens only when you end turn. It would be much more immersive if it happens right after the kill before the battle ends. The events however are are clearly defined for attack_end and die.

(4) upon further thinking about (1) and the things I read in documentation about lua functions and tried to expand it.
this is what I ended up with:


my goal was to set a condition for the wesnoth.game_config.kill_experience. As condition I would use an invisible dummy ability on the attack which get activated only when he attacks the gate - if it makes sense. This is the most reasonable idea I came up with.
(5) I'd like to know if this is technically possible and if there is a more convenient resolution for this matter?
(6) I am not sure if the syntax is right for function and the if - condition. I am also not sure if wesnoth.unit_ability() works only with return as it it shown in the documentation. also I dont know what the "(u)" stand for and come from.
(7) where does it come from and what does it mean?


I hope these questions are not too much for you and I thank you all for the help sofar.

3) I guess the other units types do not have this event/do not match its filter.

4) Game config is global - it affects everything. You can change it for the duration of certain attacks, but it is not designed to support any kind of conditions. Minor syntax issue there too - function needs closing "end".

5) It might be possible by changing wesnoth.game_config.kill_experience before each attack to 0 or original value depending on who fight.

6) "u" is function parameter, its value would be provided by whoever calls this function.

7) I think you found documentation for modifying user interface, but not sure what exactly that is about.
Justice is what happens when someone with a sword kills someone without a sword.

ghype wrote: ↑
October 19th, 2018, 12:34 pm
if you refer this post, the yes it was discussed and you eventually found a solution on hiding the xp bar. but those approaches do not indicate that it is possible with the hp as well.

yeah indeed that doesnt mean u can hide hp the same way.. not sure that it's the post i talked about, my memory is crap..


well, since everyone given you 100 of ideas, I will give you mine as well, alternatively you could use image overlay instead of gate unit until the moment some unit enter hex near the gate (or moveto near the gate, event name=enter_hex or name=moveto).
Once unit comes near the gate, the gate image overlay is removed and [unit] gate appears with 1hp or whatever you like... you kill it, it reappears again.. but inside unit array (unit.variables.times_reappeared=4) you keep increasing the number with every death, you wanted to kill it 4 times, so when that variable is equal 4 then it stops reappearing (event name=die [unit] gate...)

This way you dont see any xp/hp bar until the moment the unit enters the hex near the gate.. then when unit is adjacent u see that the gate need to die as hp bar shows..

if you feel like this way would work for you then let me know, I could write code in details. Otherwise I hope you find suitable solution

(2) ravana, you are a wizard. look at these beautiful gates now - no hp bar. thank you.
image: 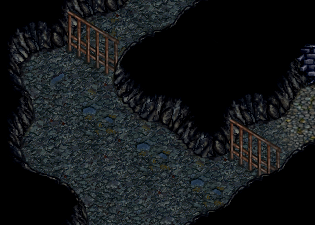 I am sorry I couldn test this before you give your answer, ravanas last suggestion was exactly what I needed, but I still appreciate your engagement.

ok so in order to decide if I follow the soul-catcher approach or the wesnoth.game_config.kill_experience approach, I want to make sure that I fully understood the soul-catcher ability. It has 4 events. Please correct me at any of those 4 events, if my statement is wrong.
(3.1):

this basically ensures that the dimensional gate has an empty xp bar at the first time the unit is created for that specific scenario.
It seems pointless at first, since every unit start with 0 xp, but considering some other abilities , like battle_tutor or garka's teaching, it could give xp to the dimensional gate without fighting or killing.

I only do not understand why and what unit gets unstored. And I don't know how relevant it is to my problem.

(3.3):
so now it gets fuzzy for me. we now have [filter_second], which references secondary units in the documentation. But this term is not further elaborated. I dont know the difference between a primary unit and a secondary unit and how this relates to filtering the same soulcatcher ability as before?

(3.4):
same trouble with [filter_second].
Also why are we talking about second_unit if the d.gate is the unit which should be affected?

I get that here is defined for what level how much lv is reduced, but again, why do we talk about second_unit? correct me if there is more to it
switch:

This event is also unknown to me. I cannot tell what happens here.

(3.5)/summary:
now that I think of (3.1) - (3.3) are events to describe a d.gates special nature, that is not able to gain xp like a normal unit. Technically for my purpose , where I only need xp to be reduced of the same amount as the killed unit and only then, maybe the (3.4) would be enough.

But i am not sure... thats why i make this post afterall. I really appreciate every help get. thanks.

3.2 primary unit is unstored - gate. It is needed to set new xp for unit on map.

3.4 for custom events, [primary_unit] is exactly what defines, what "unit" means in that event. When you need gate not gaining xp, you can set it to 0 after each attack. More events are needed only if you want fighting gate give no xp.
Justice is what happens when someone with a sword kills someone without a sword.

Ok I think I understood the soulcatcher ability now.

I tried to strip it down and to think of what it is what I really need.

so I thought this was possible to be done with 2 events - one that removes fighting reward and another that removes killing reward from the attackers.

But ofc my code doesn't work. what is missing?

You modify second_unit, but unstore unit.
Justice is what happens when someone with a sword kills someone without a sword.

Ravana means it should be:

EDIT: "no error message"
thanks for elaborating, but its still nothing happen and I also get NO error messages. So i don't know where to start.

here are the events isolated and with the last suggestion fixed. neither event1 nor event2 does something.

Have you tried just decreasing $unit.experience by 8*enemy.level before the combat? Even if that makes it negative that doesn't seem to break anything. Then after the combat add 8*enemy.level XP points back.
Top

for now i would suggest to try put {VARIABLE second_unit.name testname} and just test your event works at all.. see if the name will change..
if it change then we can think further.. i just woke up sorry I'm not very helpful..

Ravana wrote: ↑
October 21st, 2018, 4:35 pm
Note that units get experience based on what they fight/kill, not based on what level they themselves are.

thanks for noticing, I changed it accordingly but still not working (code 1).

well that sounds sweet. If we don't find a solution for this trouble, I could simply wait. Hope it won't be released too late though.

josteph wrote: ↑
October 21st, 2018, 4:48 pm
Have you tried just decreasing $unit.experience by 8*enemy.level before the combat? Even if that makes it negative that doesn't seem to break anything. Then after the combat add 8*enemy.level XP points back.

Yes I just tried it but still no results (code 1). also i am confused. can you use enemy.level instead of second_units.level? is there any specific difference between those two?

enclave wrote: ↑
October 22nd, 2018, 4:34 pm
for now i would suggest to try put {VARIABLE second_unit.name testname} and just test your event works at all.. see if the name will change.

It is part of code 1 but even that did not worked...


also i just noticed something very odd. with all the trial and error with all the combinations sofar, i remarked that even if the attacker never actually lost any xp after attack or kill, the gate never received any xp (at least for the 2day).
thats exactly what I wanted for the attacker, not the gate. Here comes the odd thing:
They still don't get any xp when no ability is activated on either the attacker or the gate.
How can the xp be affected if all my abilites are commented out with an #?
stuff I worked on: Dunefolk Rework - ghype's Daily Art
Top

Your abilities do not influence these events. All units and all attacks are affected currently. Missing filters.

For testing if code is reached, I would use wesnoth.message, [chat] or [message].
Justice is what happens when someone with a sword kills someone without a sword.