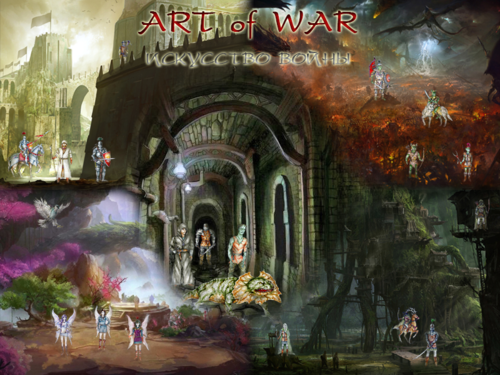 The project has been tested on «The Battle for Wesnoth» of version 1.12.6
The main purpose is a realization of our own style of a fantasy turn-based strategy game where each faction has not only unique graphics but also unique tactics. At the same time there should be an accurate logic and an appropriate art design.

Additional purposes:
- extension of damage classes for a more realistic combat: elemental (flame, frost, electricity, acid), mystical (divine, void), mental;
- modelling of a real combat, as an example adding new different unit classes such as infantry and cavalry;
- adding real ranged attacks because a catapult attacking only adjacent units is not so nice as an example;
- removing unique level-ups of every unit in case of reducing role-playing part of the game and improving strategy part; a light horseman is always a light horseman and a mounted knight remains a mounted knight, both of them can make a level-up but that will improve their characteristics only (AMLA);
- creating a long and various unit stack for each faction to use different strategic and tactical patterns in a battle;
- saving unique level-ups for some units as officers and mages who do not still change classes but rise in characteristics and skills;
- using only home-made (without frankensteining) art for units and their portraits.

Game style - the add-on is focused PvP. RPG-campaign using is possible (we have, for example, a set of hero-units, unhappily not for all factions), but the main question still is - how to teach AI using long range arracks.

Our team:
Oleg Nikitin aka Fiben – leader, idea man, designer, programmer, map editor, tester, writer.
«In memory of childhood hobby as playing with soldiers made of paper and with a great respect to computer potential.»
Aleksey Blagoveshchensky aka Barbos – artist, idea man, critic, writer.
«Devoted to still going on childhood and to my friends.»
Victor Tereshchenko aka VAT – art editor, sound editor, map developer, material finder, tester.
«Helping my friends with this game was a pleasure to take part in interesting project and a good test of my skills.»

SPECIAL THANKS
The whole «The Battle for Wesnoth» community and all creators of: «Era of Magic», «Ranged Era», «The Golden Age», «War of the Gods»
Dybinkin - for new maps 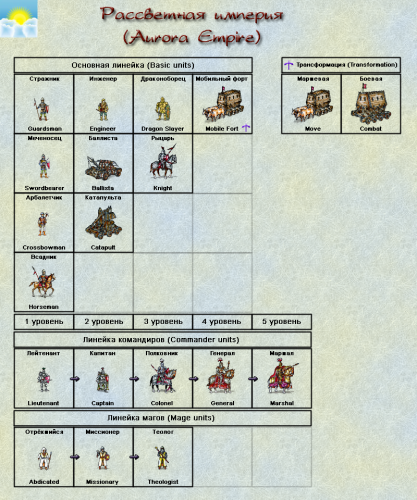 The first one as an axis of equilibrium and baseline.
“Everything is balanced.”
Humans are totally average.
There are a traditional combat style, mixed tactics, average unit prices, a lack of really strong units and availability of artillery.
There are the strongest officers.
There are the poorest mages. Mages can heal, cure poisons and protect.
The Horde 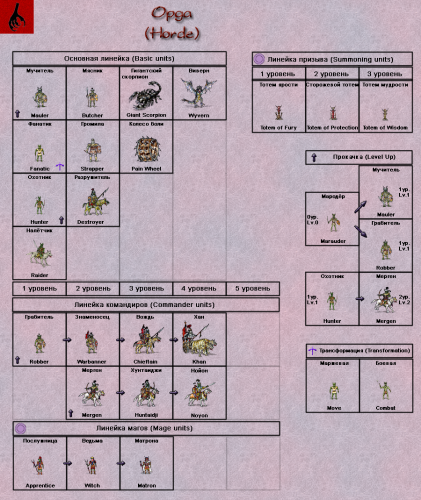 It has been created at a second turn as an opposite to the Aurora Empire.
“Strength is in numbers!”
Goblins – are weaker physically and mentally than humans plus swamp goblins are stronger physically than forest goblins and weaker mentally and vice versa.
Focusing on melee fight, attacking tactics, low unit prices, tendency to use poisons.
There are strong officers which cannot be recruited but appear after level-ups of some ordinary units.
There are decent mages who can summon totems which support other units.
The Dark Brotherhood 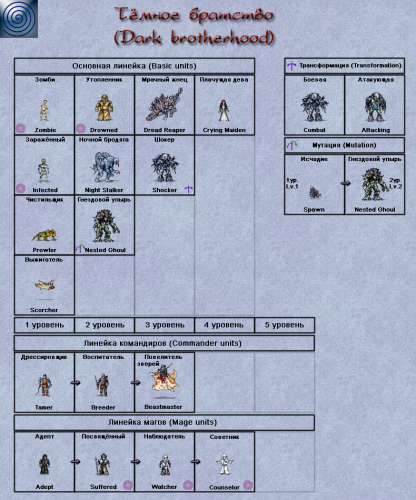 At first it was created as “The Main Dark Force and Enemy of the Universe” but as time passed it had been remade as just the third original faction.
“Each attack will be a counter-attacked.”
It has an unusual structure. Dark masters are weaker physically than ordinary humans but they are really stronger mentally. The Tamers are quite the same as ordinary humans. The Undead are immune to morale, healthy, well-protected and not very expensive but can not level-up. The Lemuts are quite various, from those weak to very strong ones and from those cheap to expensive ones. They require an accurate usage based on their weaknesses and strengths.
Focusing on immobilizing of an enemy with cannon-fodder Undead and on eliminating them with unusual Lemut features after that.
There are defending tactics, variety, different unit prices.
There are weak officers who can lead only Lemuts.
There are strong mages who can summon and “heal” Undead.
The Sylvan Enclave 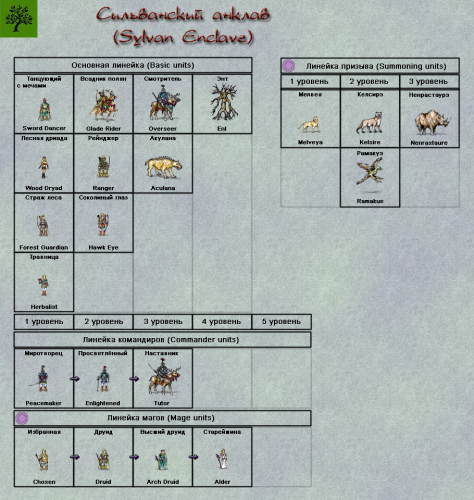 It has been created the forth because of love to nature in general and forests in particular.
“Strike from afar!”
Wood elves are a bit weaker physically than humans but they are quite stronger mentally.
Focusing on a ranged combat, guerilla tactics, tendency to have forest landscapes and high unit prices.
There are average officers.
There are strong mages. Mages can summon animal allies.
The Sky Kingdom 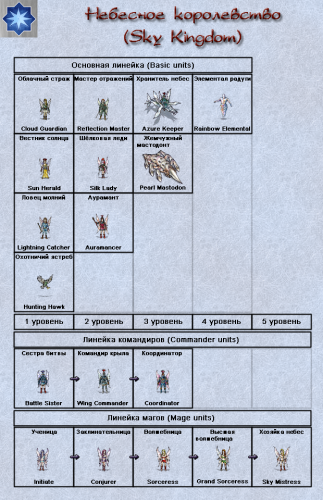 The last one for aesthetic reasons.
“A high quality is stronger than numbers.”
Fairies are quite weaker physically than humans and really stronger mentally.
Focusing on elemental attacks, hit-and-run tactics and very high unit prices. Almost all units can fly or levitate.
There are average officers.
There are the strongest mages. Mages can heal but can not cure poisons.
Last edited by Fiben on March 11th, 2020, 8:22 am, edited 7 times in total.
Top

As for now the project needs

Everyone who want to help us please mail to lockly@inbox.ru or post suggestions here
Last edited by Fiben on September 6th, 2018, 9:13 pm, edited 2 times in total.
Top

I just tried it out. It's very interesting, and it seems you've put a lot of work into it. I noticed the adept is not able to use his long range attack after capturing a village, is that intentional? Also, the description says it has to be at a range greater than 1, but I was able to use it on an adjacent enemy.
http://www.wesnoth.org/wiki/User:Sapient... "Looks like your skills saved us again. Uh, well at least, they saved Soarin's apple pie."
Top

No, it is not. I'll check it out soon.
Thanks for your assistance

Hello, I have just installed your era and I like it. The idea is nice and especially some constructs look great. Unfortunately as a surv/rpg/campaign player I am not that fond of non-leveling units, but I can certainly understand it can work well in PvP.
Top

Yes, we were focused on PvP

I am impressed by the scale and quality of this project, and want to congratulate you on this unique and very interesting era!

7) Maps: there are ideas (sketches) for many new maps but in fact we have only one for now. So we need men able to create maps based on our sketches.

Post sketches somewhere online like imgur, link me in a pm. I will see if something interests me. I wont do extra large maps however, anyways.
Remember, "Nothing flies like a Filburd!"
Top

Hi I've taken an interest in this era and I think it is quite promising and interesting. The sheer variety of abilities compared to default is quite a draw, ofcourse the avowed pvp focus means that faction balance would be very important in this era. I am thus expecting that this era will be going through many revisions / versions before the final product.

I am willing to help in the balancing process when I can. In fact I've already downloaded the era and did some quick test games

[*]a list of the various custom abilities / traits would be facilitate learning.
[*]a guide on how to use ranged attacks similar to the summoning guide for those unfamiliar with the mechanism
[*]some clarity on how the economy is supposed to work.

I talk about the economy here at more depth, something that will be very important to balance, and hence pvp. The normal default starting values are obviously not going to be compatible with the era. For one thing, it is closer to age of heroes in terms of recruit profile with higher level units recruitable from turn 1 (indeed level 3-5 units are recruitable).

Ofcourse this means that higher level units (indeed even level 1 units) are going to be very expensive. Hence in my test games I've opted to go with +3 g / vil with a 175 or 200 starting gold to make village grabbing timely and desirable, and to allow recruitment of the higher level units reasonable.
Now this could be a temporary measure, once we balance the unit costs lower (perhaps to allow for a nearer congruence with the economy of other eras, including default)

as a side note, the lack of level ups mean that games do not allow that avenue of table turning. Indeed as games go longer. the high cost of the higher level units means that they are mostly recruitable for the faction that is already winning (with the caveat that due to the balance work that remains to be done, recruiting higher level units aren't always the best option) .

There are also units with weird stats, such as the Sky Kingdom initiate with 99% terrain defence (on all terrain) which means vs say, the aurora faction which only have divine type magic (an attack type the unit has 100% resist), the sky kingdom only has to spam initiates for guaranteed win.

I'm sure we will find more of these balancing issues as we play through the era, but let me again reiterate that it looks quite fun and I congratulate you right from the get go for this initiative.

Here are the couple of replays. I tried to play them fair, but I made lots of mistakes due to unfamiliarity with the factions, but I think I have some fair grasp with the mechanics now.

I've added all these things in a description of the add-on.
Top

Thanks to a fast reaction of the Community I've started making the next version of "Art of War" - 0.9.0.6
It'll include:
- the guide for a long ranged attacks:
- summons for mages of the Sylvan Enclave;
- heroes;
- new unit portraits;
- new unit descriptions;
- new sounds, missiles and hit/miss animations;
- new maps;
- balance fixes;
- bug fixes.
Last edited by Fiben on August 30th, 2018, 9:26 pm, edited 1 time in total.
Top

1) All mages of the Sky Kingdom had wrong defenses (it was found here).

2) The Ranger of the Sylvan Enclave couldn't use his long ranged attacks (it was found on Russian "The Battle for Wesnoth" forum).

It's great to see a new addon, especially an ambitious one. I've only played a little bit and I'll definitely play it some more.

I have two minor complains: I'm not a fan of slow (4 and 3 movement) units, they don't work well in wesnoth, they make the slow game even slower and it can get tiresome. The other complain is that many units have attacks like 10-1 or 30-1, it makes the game heavy luck-dependant. I would add some additional attacks. Not every player likes risk.

This era is very promising and please keep up the good work, will you? Don't be discouraged by the lack of feedback.
Eastern Europe at War Co-Creator viewtopic.php?f=19&t=34418
"Neptune has finally wed Venus - even Gods can't screw around forever." L-F Céline
Top
Post Reply
51 posts