FaeLord wrote:Just a quick note to let you all know I'm working on the text correction. I'm thinking it'll be ready in about 7 days.

FaeLord, thx for your help! We hope the add-on will be friendly for native speakers with you

Between, we have some new work from z5x1. It's 1-st lvl sailor from pirates line for robbers. He is the best damager in Blackwater Syndicate, but this unit will have less defense because he is drunk. The sailor like rum and hassles.. Very much.

Happy New Year, guys!
Рубака is celebrating with his family, but i have top-secret picture with drafts of z5x1, main artist of this project. There are sprites of upcoming faction - blackwater syndicate, which is largest criminal organization of western wesnoth - so there is caravan robbers, mercenaries, smugglers and even pirates. Enjoy your holidays with that) 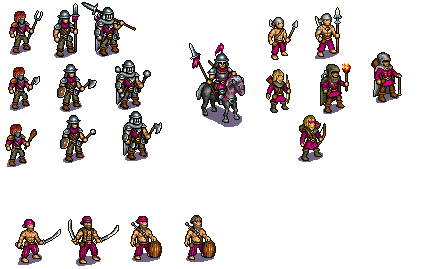 рубака is still boozing with his girlfriend, but ZeXa is working actively (possibly because he hasn't girlfriend...), so there is some of his new works: sprites of convicts unit line for the Syndicate faction. These units pretended to be poorly armored and equipped, but they are high skilled scouts and dexterous fighters.

Just a quick note to advise I am having some computer issues at the moment. Text work will be delayed until I get this fixed. On another note, I'll be interested to see more of these pirates.
Wesnoth stole my summer . . . again.
Top

There is still no new sprites of them by ZeXa, but we know something about their concepts as units (from what DV had posted before in russian topics):
pirates is unit-line which begins with sailor for 15 gold coins. It's neutral unit, who represents sailor, who went ashore in the Blackwater Port and visited some taverns (and probably other places of entertainment), and how he is drunk and may be very dangerous for good citizens and, even more - for other drunk sailors. He is maybe not even a pirate, so he has neutral alignment but still has vile trait (which allows him to take gold from killing units) and also fearless trait (why neutral unit needs fearless trait, you say? because in the era that trait provides you invulnerability to undeads terror abilities). Third trait is random trait from usual set (strong, quick, etc.). Movement costs and terrain defenses of sailor is equal to heavy infantrymen's (with some bonuses in sand and shallow water - he has 30% defense there - as much as he has in flat) but he has'nt any armor - so it's very vulnerable unit. His 6-4 melee damage may be not outstanding for the royal army (as 3 loyalist units has total equal damage), but it's very high for much weaker in terms of damage robbers faction. Moreover, sailor has two unique abilities - bottle of rum which allows him to heal himself of poison, slowing and any other negative effect in beginning of every his turn - he just taking a sip and now he is healthy! (but this ability doesn't restore HP). Second ability is even more amazing - it's marine brotherhood which binds all the seamen with brotherhood ties. When unit with this ability stands near his ally with same ability, blade, pierce, impact and arcane resistance of both units increases by 10% - and this bonus will be higher for every additional sailor! (upto incredible 60% bonus for sailor who is in contact with six ally sailors - but that position also means there isn't any chance he can attack or be attacked as there isn't free hexes around him).
It's very hard for drunk sailor to learn something, so it's whole 40 points of XP until he can upgrade. His 2nd levels are boatswain, marine and cook.
Unlike sailor, who is maybe just drunk man on vacation, boatswain is surely pirate (so he has chaotic alignment). Moreover, he is ship's officer who frightens enemy units as well as his own subordinates. His damage is increased to amazing 7-5, but sailor's main problem with mobility and agility is still with him. He still has both bottle of rum and marine brotherhood but also third magnificent ability - sailors authority which increases damage of adjacent ally sailors (not only 1st level but any unit of this unit line excluding other boatswain and skipper) by 20% and decreases damage of adjacent enemy sailors by 20% too. Back side of such ''leadership'' is sailors can't use their rum bottles when boatswain beside them (it's called discipline) - only other boatswain and skippers can.
Marines are soildiers of the Royal Navy, so there is no rum and no weak legs - they have mobility and defenses of usual infantry unit with bonuses for sand and water. Thougn they aren't as strong as boatswain and have 7-4 damage only, they still have marine brotherhood ability to increase their resistance and they also have unique initiative ability, which provides them 1 additional MP every time they kill enemy unit in offense. So, marine is able to kill unit in the village or other advantageous position and take the position in same turn.
Cook is ship's... cook. And yes, it's he who makes all these rum for other sailors. so his main ability is barrel of grog (when you have seen the sprite you thought it's gunpowder inside, don't you? HAHAHAHAHA!) which works like bottle of rum for him, but also provides same healing effect for all adjacent ally units (grog is less storng than rum, so your allies wouldn't become drunk and wobbly). Cook is also has marine brotherhood and even a cutlass, but he is moslty supporting unit... oh, yes and he can breathes fire inflicting 18-1 fire ranged damage (power in wine, you know).
There is also 3rd level skipper and marines colonel but there is still no sprites and no much known about them. Possibly they are just stronger versions of boatswain and marine,
Top

new works from ZeXa. unit lines of robbers and poachers are finished (no new pirates, though) 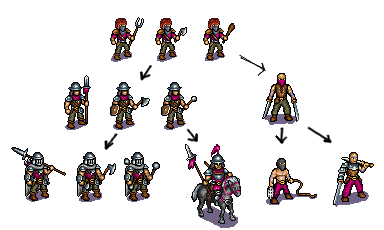 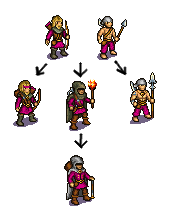 Btw, we will start our "fast" tournament tommorow and we're still have 2 empty slots for all gamers. So, if you wanna join us, you should sent me a PM and come in to the server at 9:00 CEST. All battles will be played in one day

Hi, guys! Today we have short post about baronet from Blackwater Syndicate. It's a criminal who's bought the nobility title. The unit will have 4-rd lvl and he will stay to be the best support unit from syndicate. The main ability the "cost of life" (draft label). You should kill all other robbers around baronet before you can do any damage to him.

All of these sprites created by z5x1 P.S. The tournament is done. Here you can download replays to see have the era work in multiplayer game.
The Silver Age Project
Wanna help? Contact us!
Top

I think it may be funny for somebody, there is a "cups" for the winners of "Silver Age #Fast" tournament. I will sent these prizes to the finalists from different cities of Russia.

And thanks to z5x1 for the art 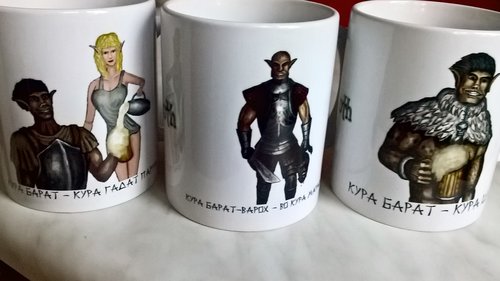 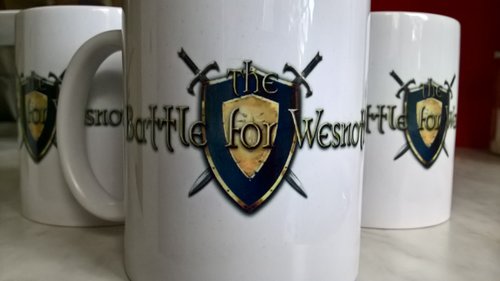 Just a little announce! Tomorrow I ll translate some information about thieves. The eras creator DV should posting something new tonight

And as i say early, today we have talk about role of thieves in the syndicate.

Thieves is a citizens of Wesnoth, who have chosen dark side outlaw life. So they are just bad guys and they will be chaotic units, according to normal Wesnoth rules. Male and female version of 1-st LVL unit will be different, the women will have less damage with 1 extra strike. And the female can take trait "beauty" (like a royals mages). Male and female unit can't take trait "strong", but all of them can take trait "weak" (1 less damage). Approaching to the protective skills, we'll see bad defense at the rugged terrains and will see realy bad resistances of the thief. But the unit will have nice damage (5-4 for male unit and 4-5 for female unit, both of them have backstab) and the thief will have small cost (13 golds). So, it's a nice damage dealer unit.

Tree of upgrades have 2 lines with 3 lvl units as a final. Let's speak about slayers (work label) first. The slayers is a professional.. khm.. killers

. When life gives you a lemon, you can agrees take any job, what city can give you. But the slayers is a mostly unmoral citizens, who earning their golds for a bloody deals. It the era they will have 5-5 blade attack (for both genders) with backstab and poison. Crosscantrys defense will be better then the 1-st lvl have.

Next up of the slayer is an assassin (work label). They're the best killers, who's often takes the Crowns tasks. The attack what they will have is a nice for the 3-rd lvl units (6-5 melee with backstab and poison, leaving aside his ranged 6-3 damage with poison).

2-nd line of thieves is a spy line. So, here the thief can take scout (work label) at the lvlUP. The unit is a smart scout, who's searching for the enemy secrets. They will be much dexterous then the slayers was. So, the basic defense for the rugged terrains will be good and the unit will ignoring enemy ZOC. The unit have 2 attack, melee attack have 5-4 (4-5 for female units) blade damage, ranged attack have 10-2 impact damage with inaccurate trait (accuracy is never more than 50%).

And last unit of review is a spy (work label). The spy is a real master of his work. His ranged attack now have marksman trait, so, accuracy of the unit never less than 60%. The spy can disappear for the enemy eyes in the villages. When the enemy finds the spy, he losts all his movement and attack points (sic!).. As you can see that at the picture, the spies have several sprites. When the unit enters village, it masks him - or herself as random citizen. The melee attack of male units variations will have 8-3 impact damage by slungshot with backstab. And the melee attack for female units variations will have 5-5 piercing damage by stiletto with backstab. Both of variations have ranged 10-2 damage with marksman trait, as I said it early. Hi all! In several days I'll add a preview for the sprites in bottom

Yes, we have new work from z5x1 For the black sorceress/sorcerer (lvl 3) you could add a "kiss of darkness" spell that corrupts people into phantom slaves.
Top
Post Reply
74 posts