lots of updates happened since v0.8.9

"VIlkai + Default" v0.8.16 is up in Wesnoth 1.12.16 and 1.13.7.
Just a little update, a few sprite changes and a new Attack for the herbalist line.
Developer of Project Haldric
Add-ons: Millennium Era, Vision of a Shaman, A New Home
Art: Bitron's Art Thread
Tools: WML Syntax Highlighter for VS Code
Top

Hope you like it!
Developer of Project Haldric
Add-ons: Millennium Era, Vision of a Shaman, A New Home
Art: Bitron's Art Thread
Tools: WML Syntax Highlighter for VS Code
Top

Version 0.9 is out and comes along with some major changes to the faction.
The Vilkai are a folk of hunters. This is why the Hunter line should be one of the main units in that faction and in order to emphasize this, I redesigned the Hunter to be a strong, but less special unit. This should make them fit better for regular battlefield situations. Since they are hunting folks and strongly attached to nature, the sword is not as common as for e.g. the loyalists or elves. The most of the fighters would use a bow or a spear rather than a sword, so I tried to make those the common weapons among the Vilkai. Deer Riders now carry bows instead of swords and Warriors will fight with spears. In Addition, the Deer Rider line now is suggested as scout, since the bird is gone (will follow...).
Another thing I thought about was the Ghost Warrior. He is a very unique type of unit and because of that, I wanted him to be more accessable. Also, I alsways had an issue with the way the healer is represented. The Herbalist is kind a elvish shaman clone. To prevent that, I changed the unit lines. Ghost Warriors now have an own unit line and healers are part of the Shaman line.
Last but not least, water control. I never really liked the flying units. Instead of having some kind of bird we take usage of the alliance between vilkai folks and orcs. Now, nagas are now allied units and can be recruited.

Here is the full changelog:

here's the changelog plus v0.9.2, seems that I forgot to post it here..

Any comments and/or feedback is appreciated like always.
Have fun!

EDIT:
Just another quick update after a few rounds in multiplayer.
Here's version 0.9.4

I don't know, but the game tells me that Feral advances from Lv1 to Lv3 directly if the game is showing me that rightly.

Actually they can't recruit Herbalists, meaning that you will have no healer if you don't pick Druid (Lv3!!) as leader...

Lv1 Hunter looks (maybe) overpriced. Elvish archers are 5-2 mele and 5-4 ranged for 17g, also no 60% def at hills. Also compared to dwarvish thunderer, Hunter is weaker too. Maybe making archers costs 16g or giving them a stronger bow atack could fix this.

Vilakai can start with Chieftain, Wolf Fanatic, Druid ... as leaders... Lv3 units. That would give a massive adventage for vilakai over other factions.

Their Nagas in game, they show me that they cannot advance to Lv2.
The game also tells Spearmen (can be picked as leader) have no Lv1 from where they come from. Meaning Lv1 Warrior (spear) doesn't even exist in their recruit list too.

Adiotionally, https://units.wesnoth.org/1.12/Vilkai_E ... tml#Vilkai doesn't coinside at all with the details of the faction while running wesnoth ... shamans at the link shows pierce atack and not their corresponding cold/arcane atacks.

Well, actually, there are 7 recruitable units as you said, but Warrior (with spear) and Herbalists are missing... don't know if you removed them in their recruit list or not, but there are residues of previous work if that is the case.

I was trying something with that addon earlier today (uploading without e-mail filled in in server.pbl), maybe something got broken. Wait a sec...


So, I had a look into my original files and everything seems as it should be. Deleted my folder on 1.12 and downloaded the addon like everyone would.
Druid is L2, Feral advances into L2 Folf Fanatic.

True thing is that I removed the herbalist line entirely. In v0.9.4, the Shaman is the one who can heal a little, but that will change with the next comming update.


Vilakai can start with Chieftain, Wolf Fanatic, Druid ... as leaders... Lv3 units. That would give a massive adventage for vilakai over other factions. 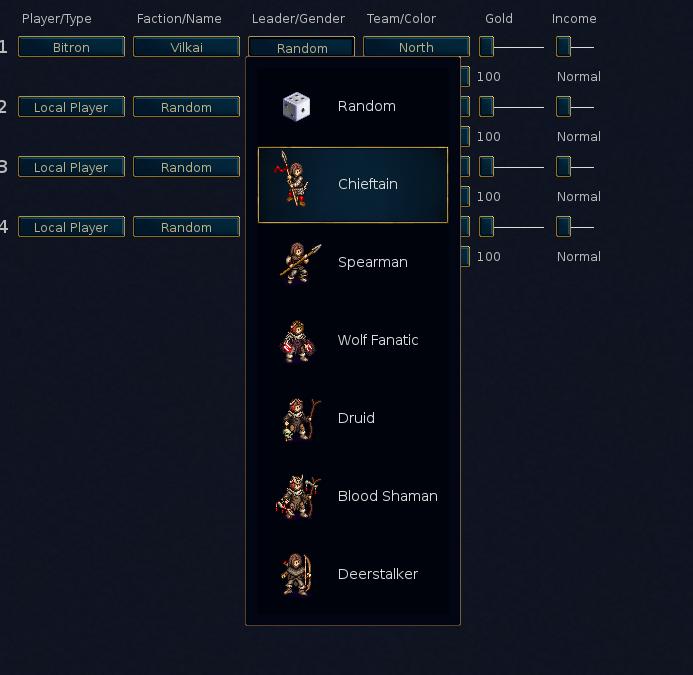 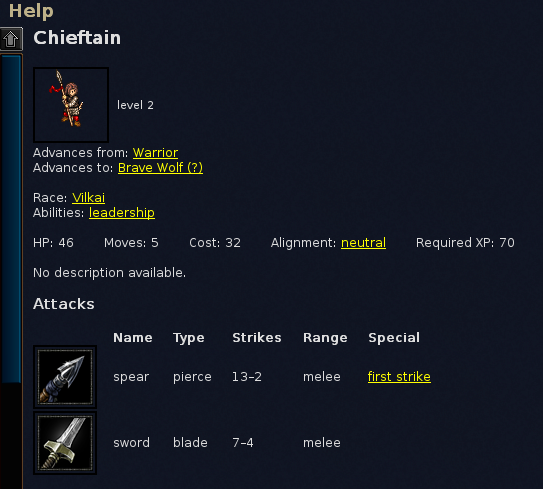 I don't know, but in my 1.12 version, the leaders are definitely lvl 2 units. Same goes with Wolf Fanatic and Druid.

I could upload 0.9.4+dev with the new spirit unit line and some minor changes. Maybe that fixes what ever there is broken, if so.
Developer of Project Haldric
Add-ons: Millennium Era, Vision of a Shaman, A New Home
Art: Bitron's Art Thread
Tools: WML Syntax Highlighter for VS Code
Top

I've downloaded vilakai today some few hours ago, just like an hour ago, several minutes earlier than doing my post. So anyone downloading the add-on after I did will have the same version than me. Would be nice to verify if everything is ok.
Creator of: Deathmatch new in 1.12 server.
Developer of: Empires in 1.12 server.
Try My winning Orocia Guide
Top

Another thing, you mentioned the hunter is too expensive and i should set it maybe to 16, which is weird because he's at 14 g in 1.12 atm.
Also, the warrior is available. This is how it should look like (from the downloaded version in 1.12)
Spoiler: 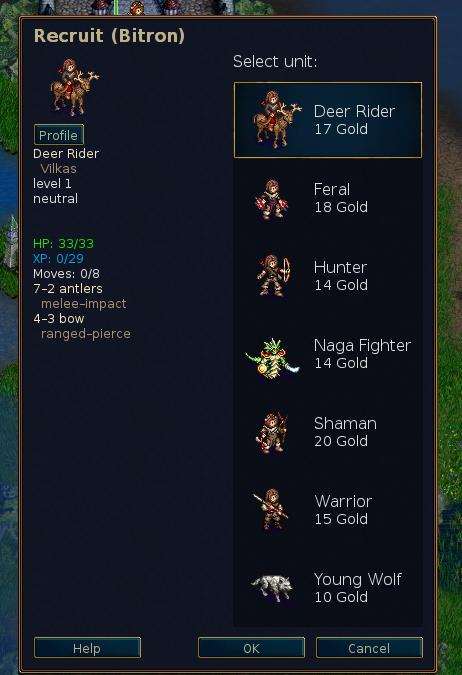 I'd say you have some previously version installed but it's kinda impossible if you downloaded it today. I will upload 0.9.5 as it is and give you a hint when its done. Maybe that helps with your addons version.
Developer of Project Haldric
Add-ons: Millennium Era, Vision of a Shaman, A New Home
Art: Bitron's Art Thread
Tools: WML Syntax Highlighter for VS Code
Top

In case, addons are just updated and not reinstalled when "updating" an addon, it might help to remove the old version before installing the new one.

EDIT: ForestDragon made me attentive to some issues, I made a quick hotfix.
Changelog:

Okey, I don't know why I'm seing something completely diferent if I have even removed and reinstalled the add-on , but this is what I'm seing:

It's obviously diferent than the one you're seing in your version. I see that hunters costs 18g while they should cost 14g.
Also I have downloaded the add-on less than 15 min ago.

Oh my, I have an idea. Do you have ForestDragons TGA installed? This might be why you have some old sprites and stats mixed up with the new ones. I'll ask him to mark the TGA Vilkai with unique IDs, if that's what cause this problem.

EDIT: the files of the corrupted era you have posted seem to be fine.
Developer of Project Haldric
Add-ons: Millennium Era, Vision of a Shaman, A New Home
Art: Bitron's Art Thread
Tools: WML Syntax Highlighter for VS Code
Top

Yup, I have the Golden Age Era installed. That could be the reasson of the glitch.
Creator of: Deathmatch new in 1.12 server.
Developer of: Empires in 1.12 server.
Try My winning Orocia Guide
Top

Yes, TGA uses the same IDs I do in my addon. I'll ask him to change it.
Developer of Project Haldric
Add-ons: Millennium Era, Vision of a Shaman, A New Home
Art: Bitron's Art Thread
Tools: WML Syntax Highlighter for VS Code
Top
Post Reply
71 posts