A long time ago, my brother and I started a new era. You can still find the original post including descriptions of the peoples here. After a long time of inactivity, we now restart this project. We decided to start a new thread because the old one is filled with very old questions and we don't want to be thread necromancers. It is still a work in progress, still a lot of work has to be done, especially lots of sprites have to be painted because some are missing, some are terrible and some are Frankensteined and hence have to be exchanged in the long run, but at least we started again. It can be downloaded from the official campaign server.

he description goes as follows:
A multiplayer era which is situated on an
island far away from the Wesnoth mainland. The human nation
of Artonia has to defend themselves against the attacking
black army while their villages are pillaged by pirates which
live in a big forest. They have support by their friends, the
mountain mages, but they are somewhat unreliable and live on the
other side of the dangerous forest in the high mountains,
searching for magical items in the caves where the earthmen live.
Meanwhile, the lizard alliance consisting of dragons, lizards in
the desert and Uralians in the big Swamp have agreements to help
each other to defend their realm against human researchers, pirates,
the undead armies of the witch apprentices in the large swamp and
the armies of an old high culture which rise again as skeletons.

I also had a campaign somewhere, but I don't find it right now, but I will upload it as soon as I found it and fixed the obsolete WML.
If you have any feedback you are welcome to tell us. 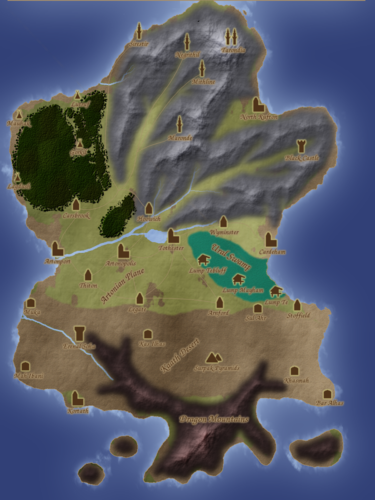 Some strange formating:
-Some attack names start with__.
-Some unit names are written in small letters, and some units of the swamp_undead have _ instead of spaces.
-The Crossbow attack of the Dark/Heavy Crossbowman is still "__Armbrust" (checked in English)
I think "Tank Mage" does not make sense, try Armored Mage.
Some units in the Swamp Undead faction have no images (I of course hope you will get better graphics eventually...)

But I like your era, especially the setting (and the "Wizard Lizard"

)
After far too long an absence, I have returned.
According to the quiz 100% Silver Mage (85% Archmage, 75% Shyde, 67% Flameheart and Ancient Wose,58% Assassin, Troll Warrior and Berserker). And my top score is exactly how I see myself.
Top

Thanks a lot for your feedback.

Yes, the attack names starting with _ floating around is a problem we know about, we once automatically inserted those _ in order to make it translatable, but we didn't notice that this sucks for strings without "" and now we just continuously correct it if we see one of them. We just corrected a big load of them today, but I guess I should just write a 5 line script to do that instead of searching for them for half a year. -.-

Ok, that sucks if some of them are written in small letters and I didn't notice the _ instead of the spaces, but we will have a look at that. I guess I could also easily detect that with a small script.

I fixed the heavy crossbowman. "Armbrust" just the German word, we started our era in German and at some point, we translated everything, but maybe we forgot a few things. It is harder to write a script for this, I guess.^^ So we will just fix them as soon as we find them.

Ok, thanks for the tank mage.

Yes, some of the higher level units of the swamp undead still need images, we are working on that. We are trying to improve all the images, but it is much more work than we thought at first. The problem is, that we just sucked at painting when we started and it was still so much work to create so many images. Now we are finally getting slightly better, but we usually take even more time for a single sprite, so it will probably take some time until we get decent images for everything. I mean, we are still not very good artists and our images will never look as good as the mainline images. Every time I see them, I think it is amazing how they just look so awful at a high zoom level, the colors seem to be completely random and mixed up, but if you look at 1:1 scale, they just look amazingly good! But I dare to say that it is getting better, our latest images look much better than the first ones:
My latest ones:

My brothers latest ones:

So that is about the level of quality for the art one can expect in the long run.

But maybe we should try to get more of the story into the era. We really have a picture in mind, we know how the map and the island looks like, but not all the stories we have in mind are really present in the era, so we should probably try to enhance the atmosphere by writing better descriptions and somehow get our map into the era etc, some of our units even lack decent names. Hahaha, some people told us that "wizard lizard" sounds ridiculous and that we should change that, but we decided that we wanted to keep it because it sounds funny, so I am glad you think the same. xD

Thanks a lot for your feedback, we will soon upload updates.

edit: Ok, all the things you mentioned are fixed.
Working on the Era of Ilthan
Top

I think Fighter of the Magic is not good English- it would better be Fighter of Magic (Same applies to the Ural of the Death), ut you might also consider something like War Mage.

The Royal Bowman uses a swort-human-short as melee weapon- you probably used the image name instead of the actual weapon name.

PS: The Mage of the High Council has magic_missile instead of magic missile.
After far too long an absence, I have returned.
According to the quiz 100% Silver Mage (85% Archmage, 75% Shyde, 67% Flameheart and Ancient Wose,58% Assassin, Troll Warrior and Berserker). And my top score is exactly how I see myself.
Top

Thanks, I fixed all of them and lots of other minor things/balancing issues. I also uploaded a campaign I created for our era. It is only a very short (7 scenario) campaign and I just played it through in 3 hours, but I think it helps to get to know the era a little. (see here for the campaign thread http://forum.wesnoth.org/viewtopic.php?f=8&t=36705)
Working on the Era of Ilthan
Top

I created a map in the last few days, that really took me a very long time. Does anybody have an idea how I could use that map except for journeys in campaigns?
Working on the Era of Ilthan
Top

I created a map in the last few days, that really took me a very long time. Does anybody have an idea how I could use that map except for journeys in campaigns?

Mybe that map could be shown at beginning of each game using the era? But that would become annoying after a while...
Some weird things I've noticed:
My first campaign:
Inky's Quest - the Cuttlefish Campaign
Top

I'm the other one who works at this era.
Thank you for telling us these bugs.
I fixed it.
Top
Post Reply
8 posts • Page 1 of 1