Which map are you referring to, the most recent one? You'll see that the northern forest is fed water by both firecloud/silver drake mountain and lake vrug.

If you're trying to say something about the aesthetics, you're probably right, but that's completely irrelevant, as it's just a sketch.

The edge I drew around it may not be right either, the forest is said to be huge. As for the ice, legend has it that the elves block the cold from the forest through magic.
Wesnoth UMC Dev
Stories of Tarlyn (on hold) - Era of Strife - The Dark Hordes
Top

Here is some history and other info I compiled for the Silver Drakes:

The Council of Silver is a council of six drakes which governs Silver Drake society.

How council members are chosen:

The very first council members were chosen out of the most powerful drakes. These drakes would fight to the death for a position on the council. For instance all of the most powerful Armageddon Drakes would fight to the death and the remaining Armageddon Drake would get a position on the council. Afterwards becoming a council member becomes a birthright. If a council member’s bloodline dies and if no preference for an heir is specified in a will and such, a fight-to-the-death contest will be held once more.

The Council of Silver is always composed of an Armageddon Drake, a Hurricane Drake, a Drake Warden, a Drake Enforcer, a Drake Blademaster and a Drake Flameheart.

The Council of Silver meets in a large chamber within the Fire Palace (where the Fire Monarch resides).

The last Council of Silver was never truly vanquished. During the siege of Firecloud Peak, the Saurians could not vanquish the Council of Silver and some of their elite cronies due to recently unlocked immense power. The Saurians’ greatest sage confronted the council by creating/summoning a Chimera and a few cockatrices and controlling them. The sage had the chimera and the cockatrices turn the Council of Silver and their cronies to stone. The Council of Silver and their cronies are technically still alive, but they just need to be unstoned. (Plot note, they are only to be unstoned and/or destroyed in TSL) The sage knew since he was old, that he would die after the job was done, since creating/summoning Cockatrices and/or Chimeras take an immense amount magic and energy, so he bound the cockatrices and the chimera to his life so they would die upon his death. He did this since they would not be able to be controlled after he dies... and having roaming Cockatrices/Chimeras is a very bad thing. The sage's spirit now wanders the Fire Palace to make sure that nobody tries to unstone the Council of Silver for malicious purposes.

Here's a ᛏᚱᛁᚦᚦᚨ-centric (as in, supposedly made by dwarves living there) map of the region. Mostly hand-drawn, with a bit of GIMP after-processing. Files used for this can also be found in the resources branch. 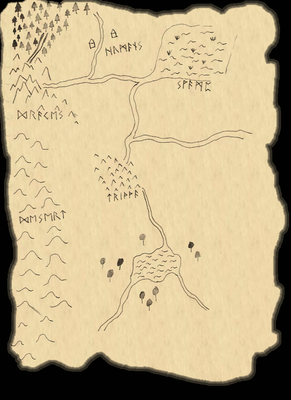 Okay, this time if you guys can give me a better model to work with, I could remake the map for you all in the Wesnoth style.

It doesn't have to be good, just something that can clearly show me where everything is supposed to be.

Would you guys want me to remake it?

The only problem with my last map was I had hardly any guidance as to what went where.
Mica says one who cheats, cheats himself.

Espreon already gave you a link to a huge map, luckily you only need a (small) part of that. This map (unfortunately based on an older version) shows which part of the previous one corresponds to what, the Silver Lands is the part we need.

I tried to draw a map of that area myself, but the attempt seems to be rather unclear. (it's obvious to *me* what everything is, but I made it)

The Era of Strife version 0.20 is now (actually, it has been for almost a day) on both the 1.4 and 1.5 addon server, it can also be downloaded from sourceforge.

Full changelog can be found here, the main changes are:
-An almost entirely new set of sprites for the minotaur faction, along with several new units.
-The free saurians have some new/updated sprites.
-Numerous balancing changes (see the full changelog)

0.20 will be the last release for the 1.4 branch, barring bugfix releases.
Wesnoth UMC Dev
Stories of Tarlyn (on hold) - Era of Strife - The Dark Hordes
Top

If you really want it translated, textdomain must be wesnoth-Era_of_Strife, nothing else allowed...
wesnoth-directory_name is a rule, not a convention.
WesCamp-i18n - Translations for User Campaigns:
http://www.wesnoth.org/wiki/WesCamp

Translation fix release 0.20a is out. It's on the addon server and a tarball is ready on sourceforge.

It looks like the automated scripts haven't been run/finished running yet though.

Please note that this release is for 1.5/1.6 ONLY and is completely compatible with 0.20.

UPDATE: The tarball is now on sourceforge.
Wesnoth UMC Dev
Stories of Tarlyn (on hold) - Era of Strife - The Dark Hordes
Top

Era of Strife version 0.21 has been released. It has been uploaded to the add-on server and to sourceforge

The main changes are balancing for the free saurian faction and usage of the new mainline portraits in 1.5.9. A full changelog can be found here.

I removed the background of Jormungandr's portrait, but I'd like to get an ok/«what I still have to do» before I commit it: 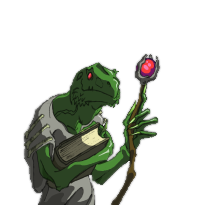 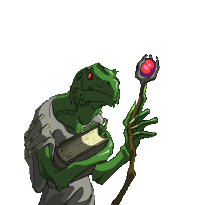 color2alpha
doubled the layer
made one black&opaque
some manual erasing

Well, basically the outlines are too thin and blurring them doesn't make it better. If you follow Kitty's instructions it turns out better and takes about 30 seconds.

Era of Strife version 0.22 is now on the add-on server and on sourceforge.

The only real changes are reef rebalancing and portrait transparentization, the main point of the release is pushing it out onto the 1.6 add-on server.
Wesnoth UMC Dev
Stories of Tarlyn (on hold) - Era of Strife - The Dark Hordes
Top

Hmm ive been meaning to start work on some of the Triththian units. Ive had a bit more free time on my hands lately so a bit of sprite work should do me some good

Hey, I was randomly looking through the EoS abilities.cfg and found a note that you had a problem with [resistance] ability in ABILITY_DISRUPTS. I had a problem like that recently, and it was because [resistance] needs max_value to function properly. I made a note of it in the wiki: http://www.wesnoth.org/wiki/AbilitiesWM ... 5D_ability

That helps, though the ability currently isn't in use.