Weeksy wrote:Try moving a knight through another one, or just getting two or three in general. It has caused some of my units to dissapear on occasion.

I think that could fairly easily be fixed. I'll post a vaguely altered version that shouldn't have that problem (version 0.1c) (although the multiple attacks problem won't be so easy to fix, and won't be fixed in 0.1c).

I am, however, starting to wonder if fearsome as it is now is really worth its coding. The ability to safely charge lower-level units is very cool, but is it sufficiently cool to warrant long codes, gameplay lags and possible bugs?

An alternative would be to simply change fearsome into a reverse leadership which applies only to ennemies. That would be done easily and bug-lessly.

I'll wait for some feedback before I do such a drastic change though.
Top

Sorry for the leave of absence. Courses have started and... well it's been a hectic week.

But it did give me a good idea, and I'd like to advertise it.

Personally, I like the gameplay of the Darklands, but I find the faction a tad... strange, at least among the standard MP factions. I wondered if a more proper background is needed. And I've had an idea...

"Dark Lords", such as those mentionned, have no place in a land of peace, prosperity and stability. They would, however, thrive in a land fallen into anarchy...

Let us transplant the faction from the regular era into a new one which would take place in some fantasy realm, during an interregnum. For years, the land would have harbored an apparent stability hiding internal conflicts between various powers. With one of the kings dying heirless, powerful lords vied for the crown with none rising above the rest. In the end, powerful lords shut themselves up whithin mini-kingdoms of their own and turn their weapons against former allies.

...are noble lords or political leaders of major cities who, despite the rising anarchy in the land, remained faithful to the traditions and structures of the old kingdom. Either supporters of a more legitimate claimant, or mere isolationists determined to preserve some peace and stability whithin their lands, they represent a civilized, stabilizing force.

The units of the Loyalists would be very similar to mainline loyalists, except I would remove the mage and replace him with a catapult line.

...are noblemen and adventurers who, far from opposing the rise of chaos in the land, seek to profit from it. Whether hiring themselves as mercenaries or wrongfully pretending to the throne themselves, they are brutal tyrants and ruthless warlords, willing to use butchery and atrocity, fighting for their own ends using any means at their disposal.

They eschew rigorous training, preferring large numbers of ill-trained conscripts with cheap weapons. When that isn't enough, they hire petty thugs and brutes as infantry. Around them gather a variety of roguish, or outright evil, knights and minor barons, and some of them have picked up some dark magic from village witches.

It is murmured among the villagers that the highest nobles and their knights have made pacts with dark forces in return for power.

This is, of course, the faction that has been in development up till now...

...are barbaric populations that were pushed away into the cold forests and swamps of the north. Powerless against the kingdom when it was united, but still capable to defend their lands, they had an old treaty of peace with the crown... but the crown is no more, and the swamp tribes are drawing their swords again, ready for plunder...

They have limited resilience and attack power, but make excellent use of wooded or swampy terrain, and are very fast. I based them around a celtic-like collections of factions I once made. Current unit list would be:

I have images for them. They're bad edits from marauders, but they'll do in a pinch. They'd need a fifth line, but I can't think of a good one...

What the description says. A foreign power, probably an empire of some sort, which may have had a hand in causing the downfall of the old kingdom and seeks to occupy strategic positions. They're not fully defined yet, but I'd like to see them have a more "mechanised" military.

That's more than enough for now! I don't, alas, have images for the imperial units yet, but as promised, here are some for the swamp tribes: 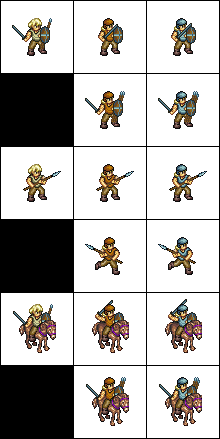 two things: A lot of pierce damage, perhaps too much?
You're missing graphics for the sage line.
If enough people bang their heads against a brick wall, The brick wall will fall down
Top

So, has this turned into the development of an entirely new Era? It seems like, at the very least, it has evolved into a thread for more than just the darklands MP... maybe you should change the name to signify this.
I like your factions, especially the swamp people, but it does seem like they have a lot of pointy things. maybe add something that hits with impact?
If you have to ask.......
Top
Post Reply
34 posts