I personally thought it needed a small buff, but I'm not a real expert on MP balancing.

About the error, I'll look into it.
Creator of the Era of Chaos and maintainer of The Aragwaithi and the Era of Myths.
Wesnoth-UMC-dev, a nice place for add-on creators.
Top

I am working also in proposals for new images for level 2 and 3 falcons. I am not very good at art, but I think it needs it.

I will post them in the Therian faction thread, which I think is the correct place.
Top

There's an EoM art thread as well. Perhaps that's a better place.
Creator of the Era of Chaos and maintainer of The Aragwaithi and the Era of Myths.
Wesnoth-UMC-dev, a nice place for add-on creators.
Top

Ok, I posted the graphics there.
Top

I'm not sure who is maintaining EoM right now but when you get around to posting it on the 1.12 server let me know and I'll post Count Kromire there.
"There are two kinds of old men in the world. The kind who didn't go to war and who say that they should have lived fast died young and left a handsome corpse and the old men who did go to war and who say that there is no such thing as a handsome corpse."
Top

I just linted and reuploaded the Era to the 1.12 server. If one of the original authors wants the pbl file, drop me a line.
Walk in the Shadows
Top

I am re-uploading Count Kromire however as a note: There are a number of bugs on the Era of Myths side of things. Depreciated description code and some kind of bug on the devling sneaks and blood born among others. I'd appreciate if whomever is currently maintaining this project fix these things up for the sake of my campaign.

EDIT: I suspect that the issue with missing images is a result of the elipse for level 0 creatures. It shouldn't be hard to fix messing around with those.
"There are two kinds of old men in the world. The kind who didn't go to war and who say that they should have lived fast died young and left a handsome corpse and the old men who did go to war and who say that there is no such thing as a handsome corpse."
Top

I fixed the invalid WML found things. (wasn't that hard).
About the other Bug I know nothing... hope you find it

Can you tell me how I can update the translations?

EDIT:
The other Bug is fixed too, it was this ellipse thing.
If you downloaded the file which I posted here, please redownload it form the add-on server.
I updated the German translation based on the .mo file (with msgunfmt file.mo > file.po). However, there are some places where the translation doesn't appear, I guess because the strings did change.
Back in August.
Top

Re: The Era of Myths

Could do list:
Some units lack a description:
- the advanced versions of the windsongs scribe
- the elementals living furnace (fire spirit) and undine (water spirit)
maybe somebody feels creative enough to write them?


Velensk wrote:I decided I'd take a look at how the EoM has been doing since I stopped working on it. When I downloaded it and tried to start a multiplayer match it sent be back to the main menu saying "unknown unit type random". I was on an 8 player map with one side per faction and a random one.

I checked through the code, but I can't resolve it. Also, I'm not very good with WML.

Balance:
Which things could need balance improvements?
(Keep in mind that changes affect as well the count Kromire campaign)

And I'm not so sure if the wolf or the troll sounds are better for the Warg...

I know many Wesnoth players are not familiar with this era, however I will be monitoring this thread. Having no prior obligations to any World Conquest games, I will be hosting and joining scenarios with Ageless Era. This week I will be testing Era of Myths and Era of Magic.
I'm tired.
Top

More animations for the Elementals, real shifting for the Therian Panther, two more sprites for the Windsong, more attack icons, and many little things... 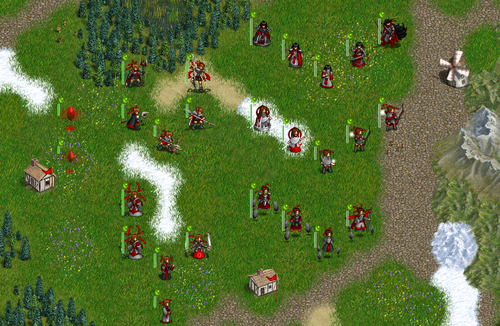 No problem, and you are welcome. I've been planning out a Windsong campaign recently, so maybe I'll get around to producing a new sprite to replace either the Arbiter or Librarian too. I'm not sure which tbh, if you or any one else have a preference for a weaker looking Arbiter or a stronger looking Librarian.
Top

Well, it took 3 ½ years to get the sprite in ... I think the Librarian looks pretty good for being the top mistress. Can't think of how to make here look even more stronger, and she still looks decent, like a librarian and not like a warrior mage. But, let's see what your intuition tells you.
A new Campaign would be pretty cool. Do you know about The War of the Dragon? It's a Windsong campaign as well. Although I didn't played it yet. (Just telling for the case you didn't hear about it yet, not to discourage you)
Back in August.
Top

I want to say I knew it was Era of Myths but not Windsong, but I seem to recall a campaign were you as Windsong do/can team up with devilings during part of it and I though that was kind of silly. I assume it's War of the Dragon because there probably isn't a lot of Windsong campaigns out there. I think I'll replay it before finishing out my planning stage just to make sure I can diversify the encounters between them as much as is storyline reasonable.

Not looking forward to the scythe either way on the spriting side of things. I've done scythes before, with mixed success, but none even half as good as the current Arbiter's/Librarian's.
Top

I read through the old posts and...
In fact there are just two Campaigns, both written by Velensk, the one mentioned above and Count Kromire, a vampire campaign, where as well Windsong appear. Didn't finish playing that campaign yet, but one of the windsongs appears in both stories. But I think it won't affect your campaign.
There was as well once a devlings campaign, without windsongs I think.
What maybe might help you - Velensk Ideas about a seperate World map.

About the spriting, maybe you can just keep the old scythe?
Back in August.
Top
Post Reply
1291 posts