It'd probably feel more powerful if it had one or two frames less, making the strike seem faster and thus more powerful.

It's funny how animations work, sometimes too many frames just slow a piece down too much.

Neoriceisgood wrote:It'd probably feel more powerful if it had one or two frames less, making the strike seem faster and thus more powerful.

Probably, and he could also turn the blade at the end of the slash to the same direction where his arm is pointing.
For the dark gods!
Top

New cavalryman. I think I need to dull down his helm a bit, and I'm also unsure about the peytral. 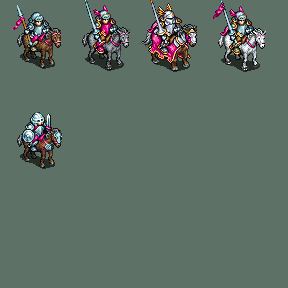 That's a lot of metal.* The helmet looks a bit odd to me, and not because you haven't toned it down. Is it somesort of a nordic helmet, or did you just make it up? Not that it looks bad, but something makes me want to add just a very slight bit of height to it.

Y -> E
A good choice, mate.
Perhaps I should counter this by changing my nick to Yternal.

In any case, I'd say the cavalryman helmet is a bit confusing with the first look. After that I noticed what it was and what was making it looking so funky. I'll try to do an edit today.
I wish I had more time in my hands.
Top

thespaceinvader wrote:I think the cav helm is intended to be similar in design to the swordsman's, but I think its eye slits have gotten a little bit large, perhaps.

Yeah, I'm trying to redo that helmet design, and would probably backport it to the other units that use it.

Yeah, I've been using this long enough on IRC (the last 6 months) that I when I realized I could change it here as an admin, I did. The Y was just silly art faggotry.
Play Frogatto & Friends - a finished, open-source adventure game!
Top

Only changed a few pixels in the cavalryman helmet. I think it looks a bit nordic, but that's a plus as far as I'm concerned.

And what struck my eye while doing the cavalryman helm, was the horseman helms' awful, pre-renewal look. I changed that as well. Hopefully for the better. 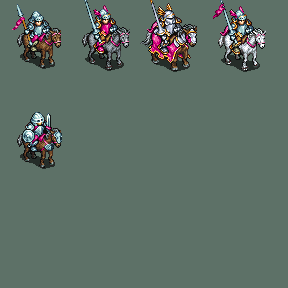 Interesting. I'll take most of that.

(not quite happy with the flange on the horsemen, but that's easy enough to build on).


And here's another pass at the footpads.

Something that strikes me about the footpads (and thugs, for that matter) - their clubs all have gigantic spikes through them - that would, to me, imply pierce damage. Perhaps making them plain wood or, as with kitty's female footpad portrait, wood with metal caps, would be better?
http://thespaceinvader.co.uk | http://thespaceinvader.deviantart.com
Back to work. Current projects: Catching up on commits. Picking Meridia back up. Sprite animations, many and varied.
Top

Jetryl requested me to try and finish the drake base frames before I left for France, so I tried getting as many of em done as I could yesterday.

I've gotten every drake unit outside of the burner line's upgrades resprited now, I hope they're up to par with the current graphic quality. 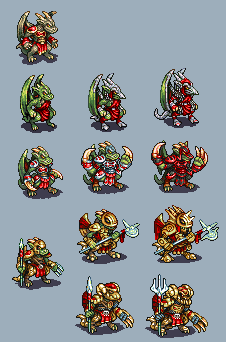 For the middle line, the hands on the level 2 and 3 are very large, and this is particularly evident when seen next to the other drakes. Even the weapons are huge compared to the side of their head or torso.
Mainline Maintainer: AOI, DM, NR, TB and THoT.
UMC Maintainer: Forward They Cried, A Few Logs, A Few More Logs, Start of the War, and Battle Against Time
Top

Just committed the new Dwarvish Scout with full melee, ranged and defence animations. I might make an idle at some later date (my ideas for the line are: one gets out a compass, opens it, taps it a couple of times whilst looking down at it, nods, puts it away. One puts his hand up to his brow to shield his eyes and looks around. One (probably the Explorer) gets out a telescope, and looks around with that. Just in case anyone wants to run with them in the interim). I'll be working some more on the Pathfinder and Explorer later on this evening after I've eaten.

EDIT: and the Pathfinder too - I had him mostly done, just needed a few minor tweaks, and defence anims.

Below are the final base frames for the three levels - if I'm feeling particularly enthusiastic, I might get the Explorer done tonight too...

EDIT: done him too. That's the whole line finished, portraits aside. I hope to have those finished at some point during WSAS.

Looks great, and I am looking forward to another one of your dwarf portraits. Already have an idea for how you will pose them? Ah, I'll just get you on IRC.
Mainline Maintainer: AOI, DM, NR, TB and THoT.
UMC Maintainer: Forward They Cried, A Few Logs, A Few More Logs, Start of the War, and Battle Against Time
Top

Our wolves currently suck. I'm interested in doing a non-invasive cleanup on the line; basically not changing the essential look of the unit, just respriting them to look better. The riders are fairly good, but it's the wolves themselves that really need some love.

I think this first attempt might be a little too bright. I think he looks fine "in and of himself", but he may mismatch the current unit too much.

I'm just posting this here because I don't have time to fix it tonight.