I sense some user will be having a new avatar soon....

Pretty convincing though, maybe you should try parody sprites.

Some additional dorking around with color schemes. It's a pity how little of my current knowledge of color theory is actually used in wesnoth; most of wesnoth isn't any sort of fancy color interaction, it's just straight, "symbolic" colors. E.g. 'hey, this a blue mermaid, so I will make it blue.' Because we're sprites, they don't really interact with their environments in any sort of way, besides our extremely neutered night-day color shifts.

You can tell the difference between me using dumb straight colors, and using "higher theory" when you zoom in on one of these and have a "wtf" moment in how bizarre it looks when it's really zoomed in and the pixels aren't mixing their colors like they do at normal size. I muse sometimes on making a whole game which just goes apeshit crazy with these sorts of techniques, but then I wonder if the drawbacks (of the effect collapsing at high zoom, and the things it does to other colors) make it feasible. If nothing else it's at least a nice tool to add "fire" to certain things (jewels, eyes, etc).

I think the lower-right one might work well as a color scheme for the Siren. The green one just wouldn't turn out; no matter what color I made her hair, she just stayed looking like a martian. The one in the middle, might be an interesting plan of attack for some nagini unit.

And yeehaw, I just blew the better part of an evening dicking around with this. I bet I can still get that siren done, though.. 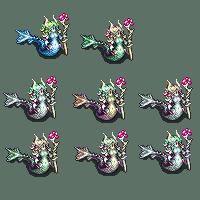 just wow - that really looks like a new level of shading and texturing for wesnothian sprites to me! simply beautiful (and much more appealing than the previous colour variations you posted)
i think the whole middle row works best, with the golden one in the middle as my personal favourite - what a unusual but still working colour scheme for a mermaid!
Top

I wonder, why not use a different pose for some mermaids to break the monotony? So far all of them have their waist facing in the same direction of their face; perhaps something like the Elvish Sorceress' pose could help...

EDIT: d'oh!
Author of the unofficial UtBS sequels Invasion from the Unknown and After the Storm (now available for Wesnoth 1.14.x and 1.15.4+).
Top

I believe these (which I just committed) made the cut for 1.6. I'll explore applying color/pose variations before I animate the race.

I also can't really do the current staff orb - it's too similar to the team orb.

A draft for a new orcish archer.

Here's a toss back to your court, although honestly I think that few changes are necessary (except maybe to the head, and/or shading on the torso). I've carefully tuned this one for size - he's the same height as the assassin, and two pixels shorter than the crossbowman (as well as being rather thinner). So, this awaits your approval, and then we'll move to animation.

- My new system for bow animations (seen on the human bowman) is what we should use - fortunately it's much easier to use than anything we've had before, and somehow ends up looking better too.
- We don't need to replace the old melee animation verbatim; it's a 17 frame monstrosity, and it's a canonical example of being really wasteful with animation frames, because I'll bet someone could make a good animation in half the size and have it be practically indistinguishable in smoothness. We can just make something new from scratch - it doesn't have to be inspired by the old one, although it could be if we want.
- The death animation should be much easier - I'm looking to make a new, macro-ified standard for deaths where we have four frames; the first frame doubles as a "wounded" pose frame, the last frame doubles as a "corpse" frame. This would allow us to add that functionality if/when death animations are near to being done. Limiting it to 4 frames also makes the entire project a lot more feasible - honestly, we'll never finish getting 8+ frame animations done for everyone. It's just too much, especially if we're ever thinking of NE frames.


Also, note the trick I did with the legs, where I put the entire lower leg into shadow. Looks much better that way, and I'm about to put that to use somewhere else (a nice post pending in a day or two related to animation upgrades for the elves). Basically, although we have a habit of treating each individual segment of the body separately, and using a lot of colors to anti-alias things, I'm seeing that it's more accurate with a lot of surfaces to have much flatter (e.g. less gradation) shading if the entire surface is relatively close to flat, and thus has the same lighting. If it's the bottom of a leg, and the knees are bent at all, it (potentially) faces completely away from an overhead lighting source.

Being what we are, a sprite-based videogame, we can play fast and loose with our lighting sources, and if a character would look much better/dramatic with their lighting source bent a little (maybe 10-30°) further towards "high noon" than normal, it's fine to do.

Very good. You have my go.

Should I tackle some part of the animating for this or...?
I wish I had more time in my hands.
Top

Eternal wrote:Very good. You have my go.

Should I tackle some part of the animating for this or...?

Yeah, why not? This is a good excuse to practice "blocking". For his melee attack, we'll want to start with him having one "melee frame", where his bow is slung on his back, and he's got a knife out (your choice of whatever hand). This happens instantly, though - if we ever do frames of units actually going through the process of swapping their weapons, we'd do it as a separate animation scripted to go before the whole sequence of melee attacks.

This should only take an hour or two - do it with just solid colors. If it's taking too long, do it with less colors, even down to doing just one color. I've attached a few examples - as you can see on the gryphon, in some cases where you know a surface isn't turning, it can be more economical to do select-and-slide, but just doing solid colors is good for when a sprite is rotating to any degree.


Anyways, go ahead and try blocking the animation (aim for around 5-6 frames), and then post the results. I can help you with the tedious task of detailing the animation after it's been blocked. Once we get the melee done, the other animations for this unit should be a cakewalk.

Long overdue updates to the Orc Leader line. Borrowing a lot from the orc grunt line, because it means I can churn out new animations really fast. And gosh-darnit, do a decent job with them. I also don't really mind, because these essentially *are* special orc grunts, for all intents and purposes.

As I post this, I am coming to think, though, that I'll be reconfiguring the L2 to have an orc warlord-like stance (and I'll upgrade the animations of both of them at the same time). There is a bit too much sameness in the stance of these three.


Also moving to the vaguely samurai-ish banner strapped to the back, because it's #*&$ awkward to try and animate a unit perpetually holding a standard in their offhand.

Update: Redid the L2 leader like I'd said, and also did some cleanup on the warlord (his height has not increased, his girth did, but that's fine).

The grunt and warrior have not and will not get any changes besides a shadow cleanup. 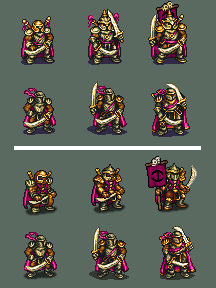 Update: Animations for the L1 leader are done, as is the shadow cleanup on the grunt.

I'm creating a new macro for a two-frame (like defend) leading animation, and will start the conversion over to it with these fellows. Two frames looks vastly better; I'd been thinking about doing this for over a year now, I just needed a good excuse to start. Also, I'm stripping the "leadership blade shine" from the units themselves for the time being, I intend to add it back in via the macro in a much better-drawn form (it'll be actual pixel art, and it'll be animated).


With the pending revision of the archer, I'm probably also gonna redo the xbowman's melee animation (everything else about him is fine), and all of this is probably a good excuse to totally redo all the shadows on the entire orcish/goblin race, since I'm doing half of them anyways. And at that point, not only will the few "slightly ugly" orc base frames be all cleaned up, but the animation upgrade project will be totally done for the race, too.
Play Frogatto & Friends - a finished, open-source adventure game!
Top

Shading tip. Particularly targeted at thespaceinvader, since he makes this mistake on sprites quite a bit, and needs to not make this mistake. This is an example of me making the same kind of mistake, and now correcting it. As always, it's not like I'm an expert, but this is us mutually trying to get better.

Look closely at the (our) left leg of this orc warrior frame. In the old one, it has a thin rim of light. Two errors come out of this. First, it tends to look like the unit is backlit, which is a big wrong for wesnoth sprites, since the light always comes from in front/above; and since that contradicts the lighting on the rest of the sprite. Second, the lack of changes in lighting value across the leg suggests that the front of the leg is flat like a cardboard box. Curves will always cause a change in lighting values, because the angle of reflection will change. Predominantly flat surfaces tend to have the same lighting value, because the angle of reflection stays the same. (This is true for distant light sources, like the sun.)

Niiice. I've been planning on having a go with an alternative attack animation for someone in the grunt line but haven't gotten myself to it yet. These updates should make it a lot easier (i.e more likely for me to work on), since they're a bit simpler, clearer and overall better - the thin rims of light have always been somewhat intimidating, since I thought I just didn't know how to determine the source of light.
The new leader sprites also look very cool. Also, would you mind another spinning strike for the orc race? The warrior's stance just begs for a huge all-around sweep.

ps. I'm still thinking the slayer's attack animation's a bit of a mess, might try to polish it someday soon. He looks like he's falling down a stairway, and the shading quality suddenly drops during the last few frames.
For the dark gods!
Top
Post Reply
1046 posts