Here are the rest less problematic sunken tiles. 12 more to go and I don't know how fix them.

Pointing out some problematic parts.. 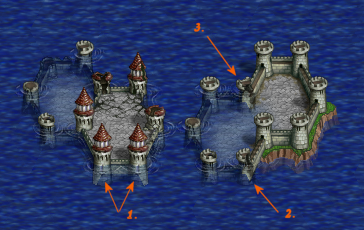 Here are rest of the sunken tiles. Now everything is drawn.

I've made some progress with the waterline problem. If there is a shallow water or deep water hex under the sunken keep tile, one should use the proper sunkenkeep hex. New sunkenkeep hexes are included in the zip. 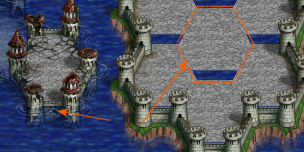 Yesh! Here is the fix for the overlapping problem. Accompanied by some wml-magic the keep is ready for 1.2!

Congratulation Pekka, you did a great job,


impressive both by it's quantity and quality...
Fight key loggers: write some perl using vim
Top

Back to my favorite topic...

Zookeeper (and other WML wizards):
What do you think, should I make correcting tiles for this little glitch between sunken and ordinary castle? 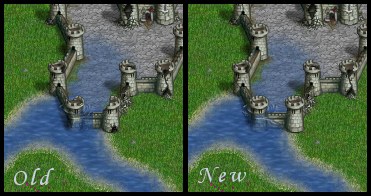 pekka wrote:Zookeeper (and other WML wizards):
What do you think, should I make correcting tiles for this little glitch between sunken and ordinary castle?

Well, personally I don't see that as likely being worth the effort (if someone really wants to do it then great, but I would rather suggest spending the time on more visible improvements). It's not that hard for map makers to avoid glitchy terrain combinations such as this, right?

EDIT: I assume you were actually asking whether or not these tiles could be put to use with WML: sure. I'm not sure how complicated that would be, since I'm not very good with terrain graphics WML, but it could be done.
Top

I think it's hard to see this glitch at all, took me some time. Not to forget - won't this problem vanish completely with the terrain engine where you can have different letters for castle, sunken and ruined castle in each variation? I think with that change along with the new horizontal+vertical layering it should rather be possible to get rid of quite a few special tiles for castles?
WesCamp-i18n - Translations for User Campaigns:
http://www.wesnoth.org/wiki/WesCamp

torangan wrote:won't this problem vanish completely with the terrain engine where you can have different letters for castle, sunken and ruined castle in each variation?

They are already different letters, so this problem won't vanish (or, I'd suppose, be any less complicated to solve).
Top

It could probably be used in WML, but I don't think it is a real improvement.

While the old transition is an obvious graphics glitch, the new one is physically impossible. This is of course a general problem with the sunken ruins: they are at the same height as the normal castle, but under water. That's ok usually, but when you put sunken and normal tiles together, it just doesn't work.

Unfortunately, I have no idea how to solve that (Shifting the sunken ruins down might work, but then the walls won't align with the hex borders anymore).
AurÃ« entuluva!
Top
Post Reply
206 posts