vultraz wrote:Resolution isn't an issue; they can be dynamically scaled.

What does that mean?
BfW 1.12 supported, but active development only for BfW 1.13/1.14: Bad Moon Rising | Trinity | Archaic Era |
| Abandoned: Tales of the Setting Sun
GitHub link for these projects
Top

I was wondering the same thing, and kind of suspect that it's wrong. It's not good to distribute it with the game at a ridiculously high resolution and then just scale it down; better to distribute it at the resolution you'd prefer it to appear as. Of course you can still scale it down if the window is unusually small.
Author of The Black Cross of Aleron campaign and Default++ era.
Maintainer of Steelhive.
Top

The portraits are internally handled by the GUI2 image widget. It would be really simple to add these keys to the WML:

to ensure the image always fits in the screen. Might be slightly more difficult to preserve aspect ratio, but it could be done.
Creator of Shadows of Deception (for 1.12) and co-creator of the Era of Chaos (for 1.12/1.13).
SurvivalXtreme rocks!!!
What happens when you get scared half to death...twice?
Top

Since height is the restricting factor here, you can get the ratio from the height first and use that to calculate the width. Pseudocode:

... so that those of us without a fancy monitor can still see details.

Dynamically scaling it down doesn't help showing any details.
Top

Author of The Black Cross of Aleron campaign and Default++ era.
Maintainer of Steelhive.
Top

Hi LordBob, nice to see progress on this.

Unfortunately, I'm not really convinced by the poses of the Desert Elves Fighters; looking at them some time, I have dubbed them 'The Three Ailments'.

#1 seems to be itching and twitching; his weapon shoulder is very high and close to the torso, while his shield shoulder is considerably lower and maybe disfigured?

#2 seems to be politely coughing, that'd explain what he's doing with his shield.

I guess #3 is about to sneeze, as his head seems to be bent back.

I'm trying to be pointed, not insulting.
I don't know when they would stand that way or what their pose is supposed to tell me. For example they neither seem to hold their weapons at the balancing points nor like in an attack? Anybody else have thoughts on that?

Also, I guess the protective spikes below the visor (#2 & #3) and the shark fins above it are supposed to be both centered, but they don't align visually.

Oh, and I think the shield from #1 might be too different from the other two, as it's the opposite of waisted and composed of circles.
I have a cunning plan.
Top

About image size:
Most important is a square canvas. So all this calculation ending up in rounding would be void. A 600x600 canvas was never a problem at my sub notebook.

Many years ago ( like 7y or 8y ) there was an automatic 80% display on notebooks. If you wanted to see 400 pixel in game you had to scale them up manually to 500 pixel. That was seriously silly.

Anyway full standing pictures do limit the perspective choices for an artist severely. Which might be a good thing, but it is no fun at all for the artists. So I agree with Lord Bob (Not going to happen).

About Grog the troll and others:
I would guess that most players choose the troll side. If you loose Grog you get his (twin?) brother as guide. There is a sequel campaign called Grog's journey. Pretty good. I am not aware of any troll character portraits of other campaigns which could be utilized. So if any of the minor actors gets a portrait, Grog would be my first choice.

For Esnoo maybe Gwabbo could be utilised. But for Melisand I am not sure of an elder Mermaid in any campaign. Just the generic portraits, which might be ok.

Second choice for me might be the bow naga. As it is a campaign specific unit which says a few lines in some szenarios.

Maybe we should rally for an enlargement of the commission?

About female elves
You had a female fighter line. Is that dropped? Maybe the scout line could have a female cast too? It would look weird if the female elves are limited to singing for the sun and for the moon.

Maybe limit the advancement paths of male/female for fighters/scouts? This way the player cannot choose and the unit balancing would not matter. Side effect would be less art variety.

Edit:
I made a drop in folder for all art to test the standing pictures in game for those who like. Bull is 700, Scout is 600 and regular standing is reduced to 500. I took choices with all the rest. The generic lines have a single standing one. The unit files would need a line of code for it. Oh and I made a campaign image

Edit2:
Sun and moon singer, shaman (has to double as mystic) and scouts with thinner animal necks.

After 3 month it would be nice to get an update about the current direction of this project.

Nuorc was critising the perspective of the warrior sketches. For me this perspective reminds me of typical fashion pictures. I do assocate an action orientated perspective more with a slight look down at the figure.

In art I noticed in general the emulation of a strong camera lense (Fish eye style?). That does not work for me very well in game application either.

There is a extrem strong trend in art to get rid of lines. This makes art truly scaleable and blurs the line between 2d and 3d art. I do not like it personally, but would understand if Wesnoth and Lord Bob is joining the trend.

If there was something wrong with my short detour above, I would ask to simply ignore it and move on. It does not matter so much for me, if another unit line gets female or if the heroes have lighter or darker skin than the generic portraits.
Top

Hi crew. Just a quick word to say I am back after another loooooong absence, for which I am truly sorry. I spent the past 6 months buried under a ton of work with barely any energy left for side projects, fortunately my situation has improved now.

I've picked up the Fighter line where I'd left it. Perspective and poses were reworked, which should solve previous issues noticed by Nuorc.
I'm working on the lvl 2-3 fighter next. 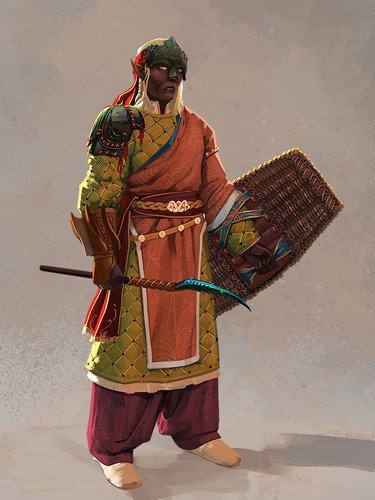 Nice to see you back! I don't know your situation, and if you are open to comments from amateurs, but I was bugged a bit by some parts of the fighter's face. (If there is one thing to nitpick over, it is the face, right?)
1. The nose-guard would be easier to read without the under-curving of the head-gear under the brow-ridge.
2. The eyes seemed to be glowing (daemonic) or clouded (dead), without any pupils. Maybe that was an effect of scaling, but if you can ultimately work in something to have a readable pupils and "wet-shine", that would be great.
3. The flesh above the upper lip seemed off; with the weak jaw and weak chin it looked kind of puffy, like maybe it was a mustache?

I tried to illustrate these points in this image, hopefully it makes sense: 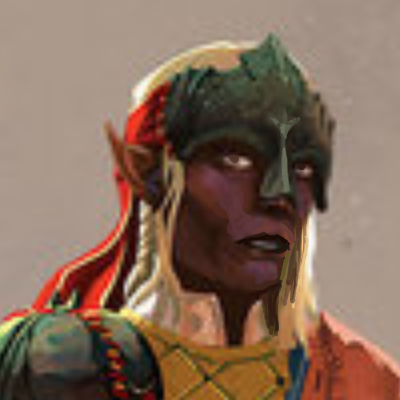 doofus-01 wrote:The eyes seemed to be glowing (daemonic) or clouded (dead), without any pupils.

But elves have had glowing pupils since forever.
Campaigns: Dead Water,
The Founding of Borstep,
Secrets of the Ancients,
and WML Guide
Top

Yeah, but they still had pupils or at least irises.
BfW 1.12 supported, but active development only for BfW 1.13/1.14: Bad Moon Rising | Trinity | Archaic Era |
| Abandoned: Tales of the Setting Sun
GitHub link for these projects
Top

@doofus: I am always opened to feedback comments of course, especially when they hit the mark (re: mouth and nose piece)

The eye thing is... Well, Beetlenaut is right. Grey pupil-less has been a feature of our elves since...Probably the first portraits Kitty painted, if not before. If you check the portrait gallery, you'll see it's only the lines that create a semblance of an iris. As for my own preference, I would even take it further so as to have their irises glow in the dark, similar to how a cat's reflect incoming light. I actually did that on the early desert elf portraits, but it wasn't well received so I toned it down. In the current fighter, I might darken the irises a notch or circle them so that they stand out better, but I think the overall value is where we want it to be.
Want to see more of my art ? Visit my portfolio !
Top

LordBob wrote: In the current fighter, I might darken the irises a notch or circle them so that they stand out better, but I think the overall value is where we want it to be.

Sorry if I was unclear. All I'm trying to say is that the eye needs to have some sort of structure to it, like Kitty's elves, or else it looks like a dead fish or one of the evil aliens from Stargate (link). They have dark skin, so the paleness will stand out or "glow" more than it does with Kitty's elves anyways.
BfW 1.12 supported, but active development only for BfW 1.13/1.14: Bad Moon Rising | Trinity | Archaic Era |
| Abandoned: Tales of the Setting Sun
GitHub link for these projects
Top
Post Reply
265 posts