To be honest, Wesnoth's artstyle has portraits that are a little bit on the muted and dark side - the original skin tone of the portraits is not really much different than that of most existing ones. Of course, I'm also of the opinion that the Khalifate guys are a little too pale, heh.
Top

LordBob wrote:I will soon become a father (birth is expected within the next 3 weeks) so I am anticipating a mandatory period of chaotic adjustment to this new lifestyle.

!!! Heeyy, congratulations! That's awesome; good luck with everything! Calling it now, your kid's going to be a master artist and BfW tactician.
Top

So as announced here I am, back with new desert elves. Today, the fighter line (main branch). Its equipment is a shield and short spear (think zulu), with the shield getting larger and sturdier at higher levels completed by additional armor parts.

On the subject of skin, I've decided to experiment with different skintones. Since the cause of elven evolution in the UtBS setting is not entirely natural, it could make sense that the genes of their light-skinned ancestors are still getting expressed to an extent; causing a diversity of skin color far greater than could be expected in such a rather isolated population.
Visually I think the faction is going to be more interesting that way, and it leaves room if we want to keep white-skinned elves around. 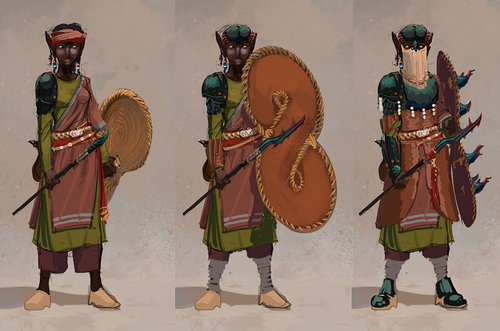 Duh, I already spent a while figuring out what I was going to say, before I actually read properly and noticed they were the three levels already, not advanced sketches of three different alternatives.

Considering that these are more of a shield wall -type spearmen (firststrike + the adjacency bonus to defense), I'd make the spear a bit longer and/or beefier. It doesn't need to be a pike or anything, especially at the lower levels, but maybe not merely a short stabbing spear either? Shield seems good, although maybe the spikes on the last one are a bit unnecessarily crude.

As for the posture, my first impression was that especially the first one looks kind of slobby, somehow. I stared at it for quite a while and came to believe that it's probably not the anatomy as such (because I don't see it in the third one), but could just be that some of the outlines in her garments (and, uh, is there a reason why she's a she?) and the way her legs look like they're wider apart due to the pants' legs somehow feed the impression that she's got poor posture (the "back a bit arched, hips sticking out, knees slightly bent" kind). The impression seems to pretty much disappear when I crop off the bottom third, so it's probably just the pants and legs and thus not really a problem.

The arm holding the spear might be just a little bit too straight? To me it looks slightly more like she's specifically extending the arm to hold it straight rather than it just hanging down relaxed or holding the spear firmly. I'd think that just moving the elbow to our left a little bit to make the arm bend at the elbow slightly would improve it.

Clothing looks nice to me, although it's pretty... civilian, on the first two? I mean, these guys are the only actual infantry units, but aside from the spear, shield and pauldron, nothing else about their attire (again, excepting the last one) really seems to say "warrior".
Top

zookeeper wrote:As for the posture, my first impression was that especially the first one looks kind of slobby, somehow. I stared at it for quite a while and came to believe that it's probably not the anatomy as such

I don't know. I think there is something with her upper body, too. I had trouble reading her shield-shoulder (hence: right shoulder). Is it turned away, to the back? Or not? Isn't there just too little shoulder? Doesn't the arm seem to come from too far back to be hanging on her side like that? (If I go by the perceived width of the shoulders and her slender torso with the slim waist, she doesn't seem very fierce to me.)

I found this Amazon and flipped her:
Spoiler: 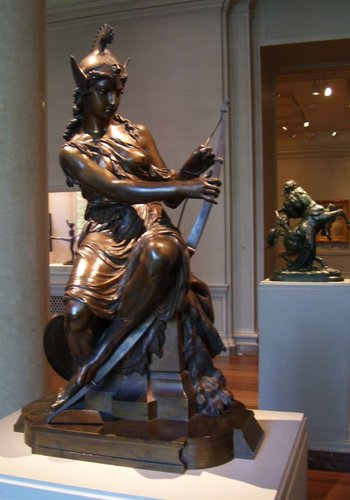 I think there is much more visible of her right shoulder, also the outline of that arm is nearly completely visible and less hidden by her breast than the elve's. Speaking of the breasts: The elve's green breast appears to be lower than the brownish, which would correspondent with the amazon's; this adds to my impression that the elve is somehow twisting her torso, not lining up with the full frontal stance of the legs.

hth
I have a cunning plan.
Top

Ohhh, so is the whole hunter with bolas concept being thrown out? I had figured you were all just going to merge together the Fighters and Hunters to make a light infantry that holds itself okay in battle but also has its slowing sidearm to make up for potential slight fragility.
Top

Gyra_Solune wrote:Ohhh, so is the whole hunter with bolas concept being thrown out? I had figured you were all just going to merge together the Fighters and Hunters to make a light infantry that holds itself okay in battle but also has its slowing sidearm to make up for potential slight fragility.

Yeah, the bolas are moved to the scout/horseman line.
Top

zookeeper wrote: Yeah, the bolas are moved to the scout/horseman line.

Ohhhh, okay that's a pretty good idea, a rapid support unit that rushes in to entangle and trap the enemy, before the infantry move to the center and mop them up. I like how the potential style of these guys is shaping up, a lot more interesting than 'elves but desert instead of tree'.
Top

Yeah, I have to admit the pose is completely off. I copied it hastily after some comic-inspired characters, should have known better and double-checked before diving into costume design. The idea is that her upper body is turning away from us, with the spear arm closer and the shield arm receding behind her back. I will rework it with an actual model before going for the final painting.

On gender...Well, no particular reason, I just wanted to change from my usual. I still haven't ruled out the possibility of doubling withmale/female portraits, although the final pictures will probably be all males/neutral in the beginning.

Gear is something I'm still not settled on. One of the defining features I have in mind for the desert elves is that I would like all of their units to display multiple layers of bright-colored clothing regardless of what armor they wear. Other than that I'm pretty open as to how they're going to protect themselves, plus I wasn't sure how sturdy you intend the fighter line to be in game.
Nevertheless I agree that the first one feels a bit naked as far as soldiers go. Then again, she still has a tower shield and zulus did fight naked after all.

Anyway, the least I could do is to make the figure sturdier, as if she was wearing padded cloth armor. In addition, I might keep the middle one as the lv.1 unit and add a heavier variant for lv.3.
As for the left figure, maybe this type of barely-armored attire would be appropriate for the scout line ?


In the meantime I did sketches for the skirmisher line (the alternate fighter branch). This one ended looking beefier than the fighter, which also calls for a revision of the later. 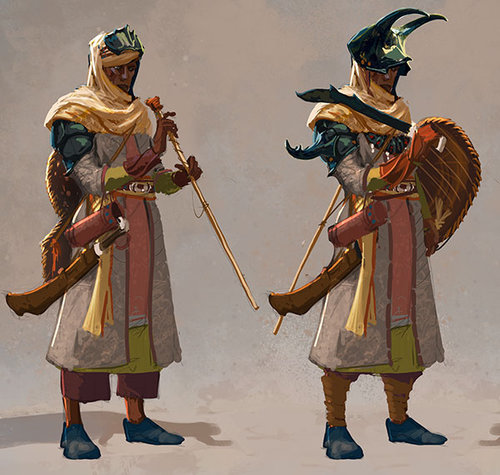 zookeeper wrote:Yeah, the bolas are moved to the scout/horseman line.

Apparently the unit tree has changed a lot. What does it look like now?
Campaigns: Dead Water,
The Founding of Borstep,
Secrets of the Ancients,
and WML Guide
Top

It is outlined on page 1!

Note that the names and stats for the desert elves aren't finalized, so I don't think my accomplices will make them public yet. The unit line up, however, is stable enough that we can start producing some artwork for them.


Beast rider is stated to be a heavy tanky line-holder, presumably it becomes less tanky on electing to leadership branch. Fighter is just shown, a light Zulu-style infantry, probably comparable to the Jundi we all know and love, though with its melee capacity way more than any range it might have. The mounted scout's probably going to be a lot more useful now that it gets those bolas, so either this is its sole real combat asset or its slightly slower now. And the shamans are most interesting, IIRC it can either choose to become a healer or it can opt into a lawful/chaotic setup to hit harder at the right times. I don't know if the named elves are going to get special units of their own since the base units Garak and Nym were don't exist anymore with this setup.
Top

beetlenaut wrote:Apparently the unit tree has changed a lot. What does it look like now?

This is the current setup (obviously with placeholder sprites and stats subject to change). You can browse the files here, if you want.

LordBob wrote:The idea is that her upper body is turning away from us, with the spear arm closer and the shield arm receding behind her back.

Wouldn't it look 'closer to action' if it was the other way around?
Spoiler: 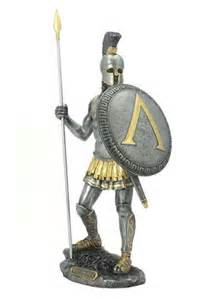 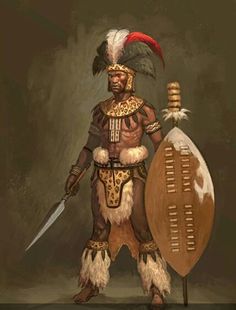 Admittedly I know nothing about fighting with spear and shield, but I would always imagine the shield arm to be 'naturally' in front, while the spear arm has a better position to quickly strike forward with momentum when kept more to the back.
I have a cunning plan.
Top

Just popping in to say I absolutely love the skirmishers. They look amazing :O
Creator of Shadows of Deception (for 1.12) and co-creator of the Era of Chaos (for 1.12/1.13).
SurvivalXtreme rocks!!!
What happens when you get scared half to death...twice?
Top

I'm very pleased with this, so far.