(yeah, more gold trim would be possible, but he is already pretty ornate in comparison with the rest of the loys)
Top

kitty wrote:(yeah, more gold trim would be possible, but he is already pretty ornate in comparison with the rest of the loys)

I did consider more gold, but as you say, he already displays a lot of wealth for a soldier of the rank. We wouldn't want him to be mistaken for a marshall

Plus, etching is a welcome change when it comes to embellishment, something I haven't used at all for the loys until now.
Want to see more of my art ? Visit my portfolio !
Top

Committed. On second look, i think i'm wanting gold solely cos it's on the sprite. The etching looks great.
http://thespaceinvader.co.uk | http://thespaceinvader.deviantart.com
Back to work. Current projects: Catching up on commits. Picking Meridia back up. Sprite animations, many and varied.
Top

Boucman wrote: Pipeman : this has already been discussed...

You mean LordBobs post from Feb 10 ? There he wrotes:


LordBob wrote: Master bowman:
- moving his sword to the right should dispell the feeling of hindrance
- will go for a slightly longer arrow He changed the arrow, yes. But I cannot see the announced change moving the sword to the right, so much for that. Or you mean something else?
Anyway, the masterbowman looks precious! I like him.
"Wenn der Bauer im Strudel mäht und die Wolken schwer zu Tale höngen, dann brauch auch du nicht lang, Mariechen, zu deinem Pferdchen kümmen."

Actually I don't think I've said the last word about this. I gave it some thought, but there's no good position for that sword. If I put it in front of a leg, it would be worse. If I put it on the side, it might get caught when he's using the bow... For every position there's a reason not to. If it can make you feel better, imagine that this is only while he's shooting and he'll move it to the side when fighting or walking.

Anyway moving that sword is a lot of work for very little profit, so the fact I didn't do it meant I dropped the idea altogether.

Edit - Re: Ardent. The subject might deserve further comment that will eventually benefit future portraits, but you have to understand I won't change the masterbowman. Period.
Last edited by LordBob on March 15th, 2009, 9:02 am, edited 2 times in total.
Want to see more of my art ? Visit my portfolio !
Top

Actually moving it to his left side should work quite OK. He can cross-draw the sword and still, while the bow is raised it isn't a obstacle for shooting.
Perhaps somebody doing archery could comment better on the topic where the sword would be comfy whilst shooting.
You are an Orcish Grunt: cheap, powerful, but effective.
Top

More rider lineart. Both are (very ugly) preliminary sketches, but this is to show the general composition of the portraits

First the cavalier, second the knight 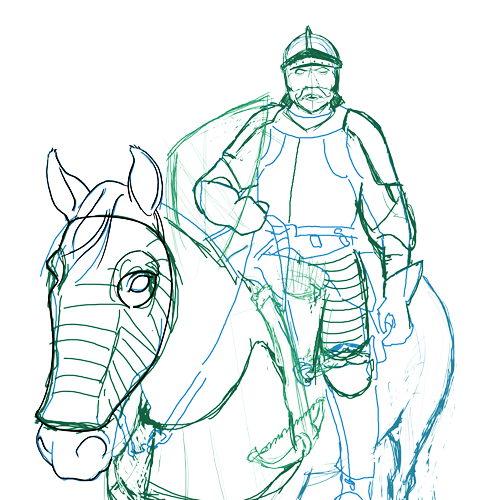 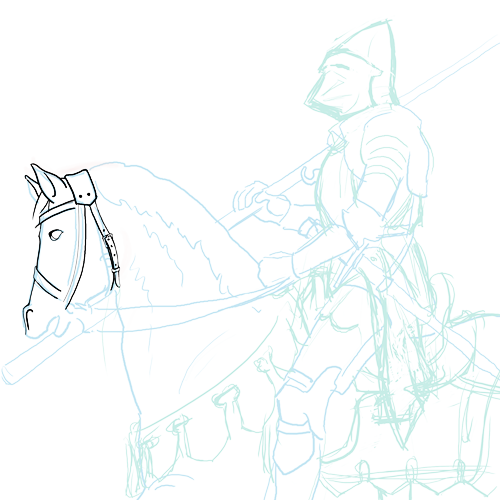 hmmm the knights lance is going to be hard to fit into the picture. how do you plan on doing that? or are you.
Top

I presume, exactly the way it is there - by cropping it off on the left of the finalised image.

LordBob: are you sure you've got the order of your names right?

The Cavalryman is the level 1, the Dragoon the level 2 and the Cavalier the level 3...

Because the sketch you've provided there looks significantly less heavily armoured than the previous lines...

The Knigth is just, wow.

And its only the sketch!
Look like one of those Hundred year war French knights!
Matches perfect!
I gonna club you in`da face
Top

I also love the Knight.

I accompany Lord.Bedham and woodmouse. I love the knight! His helmet, the lance and the detail of the lance-hook. I hope the is little need to change datails of the knight. He appears nice yet. Keep it up, master!
"Wenn der Bauer im Strudel mäht und die Wolken schwer zu Tale höngen, dann brauch auch du nicht lang, Mariechen, zu deinem Pferdchen kümmen."

TSI got it right: the knight's lance will be exactly the way it is now - remember I'm allowed a crop on the outer side.

As to the cavalier, I think you're being mislead by the "face". I'm trying a helm with a man-shaped visor, but the angle might be wrong. He also has couters, gauntlets...But mostly I thought an increase in level shouldn't benefit the rider alone : his horse will be heavily armoured

On the cavalier the horse's hindquarters seem to jut out a bit much - I've only _very_ rarely been around horses so IDK precisely how big one would be with relation to the rider; it just seems odd to me.

Also, what do the different colors signify? I know they'll all be turned to black and then painted the appropriate colors as it progresses; I'm just curious.
"we alone truly exist, ... the shadows we traverse are but projections of our own desires..."